Mezcal is marketed as the unadulterated, authentic alternative

Sign up to myFT Daily Digest to be the first to know about Food & Beverage news.

There are those who cringe at the mention of tequila, their memories of poor choices and nasty hangovers still too raw. But more people than ever are forming fresh, enjoyable memories of it: in the past decade, tequila has reigned as one of the fastest-growing categories in the spirits world. Luxury brands have helped change the conversation surrounding Mexico’s iconic export. No longer is it seen just as party fuel; instead, it is becoming associated with sophistication and cultural savvy.

In America, which drinks some 80 per cent of global exports, tequila supplier revenues rose 140 per cent from 2003 to 2015, according to the Distilled Spirits Council of the United States. Super-premium brands have enjoyed nearly 600 per cent growth over the same period. In other words, people are drinking more and better tequila, a trend that shows no signs of slowing.

The shift has helped pave the way for another agave spirit’s popularity. To the chagrin of established tequila brands, mezcal seems to have captured the essence of hipster cool right out from under them.

Mezcal is often characterised as “tequila’s smoky cousin”, but more accurately it is tequila’s mother. Centuries ago, before tequila was tequila, it was known as mezcal from the town of Tequila in the state of Jalisco. Unlike tequila, mezcal can be made not just from the blue agave plant but from a number of agave varieties that differ as much as Cabernet does from Pinot Noir. The breadth of flavours and styles is the beginning of mezcal’s appeal.

While the tequila industry has faced criticism from academics and consumer watchdog groups for abandoning traditional production methods in favour of cost-effective automation, mezcal is unapologetically rustic. It is made in remote indigenous villages, in makeshift distilleries with thatched roofs and no electricity. The agaves are cooked in underground pits, mashed using a stone mill or handheld mallet, then fermented and distilled in tiny batches.

Certain agave varieties are harvested from the wild (whereas blue agave is farmed) and can take 20 or 30 years to mature. Because varieties and production methods vary depending on the area or village, each mezcal is unique to its place.

In this era of increased demand for local food and obsession with artisanal production, consumers are drawn to the spirit’s story. Often bottled at higher proofs than tequila, it is marketed as the unadulterated, authentic alternative.

Food & Beverage
A tequila by any other name? 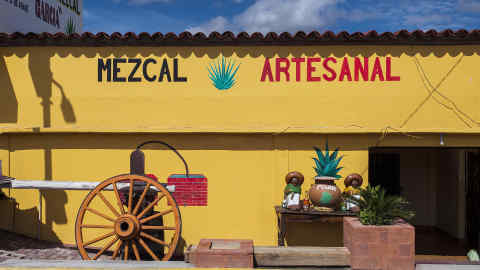 According to the Mezcal Regulatory Council in Mexico, mezcal exports rose 128 per cent between 2011 and 2015. But the industry’s overall value, $106.5m, is a fraction of the $6.7bn global tequila market. Mezcal remains a niche product — unsurprising given that few bottles retail for less than $40 and speciality bottlings can reach upwards of $200. (Pechuga, for example, is a rare mezcal distilled with a chicken or turkey breast and wild seasonal fruits. How is that for artisanal?)

The emergence of mezcal may very well benefit tequila. It expands the category to include all Mexican agave spirits, which could strengthen visibility as a whole. Yet mezcal’s rise has stirred unease among tequila brands. This year, in a reaction to mezcal’s popularity, the first “smoked tequila” was released by Maestro Dobel, a super-premium brand owned by the Cuervo company.

Other tequila brands have taken cues from the mezcal industry to release higher-proof bottlings (the standard proof in the US is 80) or highlight specific aspects of terroir or tradition. For its new ultra-premium line, Tequila Corralejo is touting its agave sourced from the Bajio-Guanajuato region. Patrón launched the Roca line, made entirely from agave milled by a two-ton volcanic stone wheel.

There is sophistication among its drinkers. Mezcal has no equivalent to tequila’s salt-and-lime ritual

The mezcal industry, for its part, is careful to avoid tequila’s pitfalls. For decades, the tequila market was dominated by “mixto” brands like Cuervo Especial, made from as little as 51 per cent agave and up to 49 per cent “other sugars”. During this time the category boomed, but came to be associated with hard partying and little else. Mezcal’s regulations allow for 20 per cent other sugars, but more than 99 per cent of all mezcal produced and 100 per cent of exports are pure agave, according to the MRC.

In addition, rather than investing in traditional advertising, many mezcal brands are opting for influencer outreach, targeting bartenders to promote the spirit and educate consumers. It may explain the level of sophistication among its drinkers. Mezcal has no equivalent to tequila’s lewd salt-and-lime ritual.

The tequila industry has room to grow. Exports, until recently US-focused, are now easing into Asia and emerging markets in Latin America. But as it settles into the mainstream, tequila will have to forgo its status as the enfant terrible of the spirits world. That role has been usurped by a new kid on the block: as it happens, tequila’s mother.

The writer is author of ‘How the Gringos Stole Tequila: The Modern Age of Mexico’s Most Traditional Spirit’

Letter in response to this article