I was a spreadsheet bride.

When I tied the knot with my husband six years ago, we came in bang on our £10,000 budget — no mean feat for a wedding in central London with 100 guests and a live band.

So when I read that this weekend’s Royal Wedding was estimated to cost a cool £32m, I felt slightly weak at the knees.

According to unofficial estimates by the wedding planning app Bridebook.co.uk, most of the money — about £30m — will be spent on security as Windsor goes into lockdown.

Bridebook’s best guess is that just under £2m will be spent on Prince Harry and Meghan Markle’s actual nuptials — more than 100 times the average £18,000 that couples using its website spend on their big day.

Feeling they have to live up to increasingly exorbitant expectations of the perfect Instagram wedding, many couples risk starting married life with a huge debt. There’s even a company called Happily Ever Hashtagged which, for a fee, will curate your social media presence. Enough already! As we found, you don’t need to spend a king’s ransom to have a right royal time of it.

Wedding planning is a great way to test your financial compatibility while there is still time to back out — and avoid wasting even more money getting divorced.

I built our spreadsheet (not a surprise, as I instigate most of the financial decisions in our household). But the size of the budget, and how to carve it up, was decided jointly with my husband-to-be.

The quickest way to blow your budget is to invite too many people. Harry and Meghan apparently have 800 at the church, 600 at the evening do, plus an extra 2,600 members of the public at Windsor Castle. Bridebook estimates that merely giving all these well-wishers a sausage roll and a cup of tea will cost £26,000 — plus a further £20,000 to rent temporary toilets. 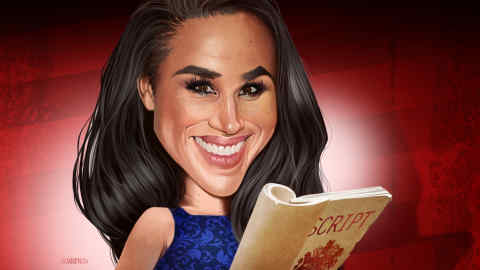 For our wedding, we vowed our guest list would be capped at 100 people. The rule was we both had to know the people invited and, ideally, that they knew a fair smattering of the other guests. We put a set amount of money behind the bar, did a deal on a job-lot of prosecco (buying discounted champagne around New Year’s Eve is another great money saving tip) and had a no-frills buffet of bacon rolls, chips and macaroni cheese for the vegetarians. There were no complaints and I wasted no time on a formal seating plan.

Couples can come under a lot of pressure from families to invite distant relatives. If you are paying for the big day yourselves, it is easier to keep control, but it will be a test of your diplomatic skills. And as Ms Markle knows, if you let the in-laws micromanage your wedding, it sets the tone for the rest of your married life.

However, she will get to spend an estimated £300,000 on her outfits, including a bespoke, designer wedding dress. Mine cost just 0.05 per cent of this sum — and came from John Lewis. I got £50 off the £200 price tag by activating the retailer’s “Never Knowingly Undersold” policy after finding it on sale more cheaply elsewhere.

This helped cover the £400 cost of my husband’s kilt. He had already received three previous Christmas presents of a sporran, silver flask and Sgian Dubh knife before he finally got the hint and proposed.

We also got a discount for cash when we bought my engagement ring from an antique dealer in Glasgow. It cost just £400, but I love it. The so-called rule that the man must spend a month’s salary on his bride’s ring is baloney. I would rather keep the money in a stocks and shares Isa than spend thousands on some bling rock that I’d be terrified of losing. Nor is there any requirement to have a wedding ring — even if you get married in a church. My husband didn’t want one, so we didn’t buy one.

Our three bridesmaids were not decked out in designer finery either. They looked resplendent in identical teal dresses which were a snip (£40 each) in the Coast end-of-summer sale. This is yet another reason why it makes sense to get married in November, as we did, and not the height of summer. Everything is so much cheaper. It rained all day, but we didn’t care as we were indoors.

We did not have a wedding list (I really bristle at these when I’m on the receiving end) but we did have some fabulous gifts from our friends which prove you don’t have to spend money to impress.

Jelena did my hair and make-up. Bara made a beef casserole for our pre-wedding “rehearsal dinner” better than any restaurant could muster. Eleanor let us hold the rehearsal dinner in her house (much bigger than our flat). Oliver, a professional photographer, did the whole day for “mates’ rates”.

I would have got the number 26 bus to the wedding, but my dad insisted on a taxi

The royal couple have sent out bespoke invitations from Barnard & Westwood, estimated to have cost tens of thousands. The FT’s layout editor Fran Jakobi made ours (miniature copies of the “Wedding Times”). However, we spent tuppence each on the envelopes, figuring these would just end up in the recycling.

I would have got the number 26 bus to the wedding, but my dad insisted on a taxi. Having scrimped on so many things, we could then splurge on what was important — namely, the music and dancing.

As I am a journalist, we were eligible to get married in St Bride’s Church. A stunning setting, but what really made the day for everyone was its fabulous choir.

After the ceremony, a friend’s bagpiper father led us in procession through Fleet Street to a bar we had hired (the City must have been the only place in the country where you could still get keen rates on a Saturday night).

Being the saxophone player in an eight-piece band has its advantages when it comes to booking the entertainment. Meghan and Harry are expected to spend as much as £300,000 on theirs, and it is rumoured that guests Rihanna, the Spice Girls and Elton John could end up making a star turn.

At our “wedding gig” our best man Dave sang Bowie’s Moonage Daydream; my mum and dad crooned This is My Lovely Day; and my stepson brought the house down when he sang 500 Miles by The Proclaimers, perfectly mimicking his dad’s Glaswegian accent.

For all the money they’re spending, it would be churlish not to wish the royal couple well. I hope their big day is similarly priceless. 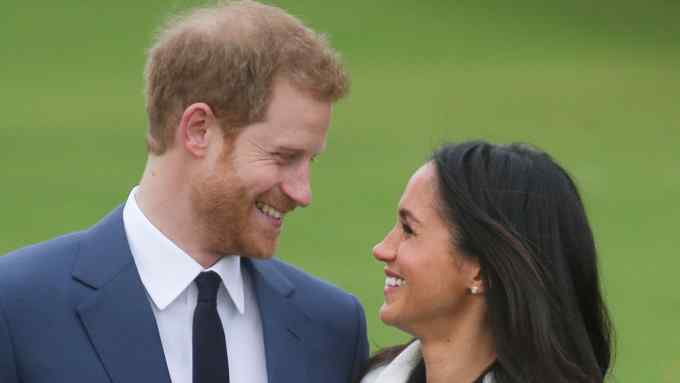