The mother of all motorcycle rallies

Barrel-chested amateur rugby player Patch McMeekin doesn’t look like a man who takes fright easily, but he admits it was “pretty scary” to spend two hours wrestling his 10-year-old Royal Enfield through the foot-deep, ice-covered potholes littering the floor of the pitch-dark Tunnel de Parpaillon. That said, no one who entered the inaugural Great Malle Mountain Rally was looking for an easy ride. And organisers Robert Nightingale and Jonny Cazzola did advise against taking the optional route through the 500m tunnel, which was built by the French army in 1900, 2,600m up the side of the Col du Parpaillon.

Such situations chime with the “prepared to get lost” mantra that underlies Malle London, the firm founded by the pair in 2012 as a small-scale manufacturer of adventure-based, fit-for-purpose motorcycle luggage. The business has subsequently developed a whole new strand staging light-hearted competitions for “inappropriate motorcycles”. The inaugural event, the Malle Mile Festival in 2014, was held in the grounds of Kevington Hall in London and attracted around 50 riders. Eight years later, the festival – now held in the grounds of Grimsthorpe Castle in Lincolnshire – draws closer to 1,000 entrants (and even more spectators) and is just one of a calendar of live events. Others include an annual beach race, the Scotland-to-Cornwall Great Malle Rally (the longest and largest event of its type in the UK) and, as of this year, the Great Malle Mountain Rally – 1,200 miles from the start of the Alpine range in Austria to its end near Monaco, all covered on small roads and serpentine passes. While it’s a journey that any reasonably organised motorcyclist could arrange for themselves, Malle offers the convenience of a turn-key package that takes care of everything from getting an entrant to the start line to organising nights under canvas and providing decent food – and providing back-up should things go wrong.

I signed up for the mountain rally within days of it being announced. Ordinarily I would have ridden from home to the start on my own machine, but commitments in southern Italy the morning after the rally ended made that impractical. Happily, Malle will arrange motorcycle hire for those who don’t want to bring their own (at a cost of about £1,000) and for me they sourced a new Royal Enfield 650 Interceptor, which was ready and waiting when I arrived in Innsbruck, a half-hour ride from the start of the rally at the majestic Schloss Friedberg.

Nightingale has become known among Malle fans for his easy but deceptively persuasive manner – and he puts it to good effect when researching the rally routes. He seeks out remarkable buildings in remarkable places before assuring their initially bemused owners that it really would be a good idea to welcome dozens of motorcyclists to spend the night on the premises in bell tents – and that they might like to lay on a lavish supper too. He clearly goes to some trouble to assess the dynamics of each team of riders, a process that begins the evening before the start. For this event there are around 70 of us taking part, with people from all walks of life – from a film-set builder to a fund manager, and a chemist to a PlayStation art director – all bound by the common thread of seeking adventure on motorcycles.

By the time the small groups of riders roar off out of the gates of the Schloss at three-minute intervals, the bonds have already been established, camaraderie is building and the adrenaline is flowing. The first day’s ride is 189 miles to the overnight stop at Castel Katzenzungen in South Tyrol, a route that takes us up the Colle Isarco and into the Dolomites via the Sella Pass – a journey of breathtaking views and unbeatable riding roads.

It’s beautiful but gruelling. By the time we reach Castel Katzenzungen (home, incidentally, to a single, sprawling grape vine that is said to be the oldest in the world) it has become apparent that the trip is going to be anything but a relaxing holiday. “It is already hard to compare what I expected with the reality,” says Gorana Pecotić, a Croatian-born doctor based in Malta who has entered the event with her partner, Alexandra Pace, a designer, who is riding a BMW F 750 GS. “We only got into motorcycling during lockdown in 2020,” she says, “so I knew a ride like this would be a big challenge – I just didn’t realise how much of a challenge. We’ve driven through the region before by car, but the constant hairpin bends, the terrain and the changing weather conditions are all things we have never experienced on motorcycles.”

The couple’s state-of-the-art machines have removed the variable of unreliability, and plenty of other riders have chosen to make the trip on modern bikes – but others have adopted the early Malle thinking. Phil Hammond, for example, trailered his heavily customised 1979 Honda CBX all the way from his home in San Sebastián to the finish line in Monaco before riding it the 400 miles to the start.

It proves to be a bad decision, because the bike’s engine fails at the start of day two, leaving Hammond’s friend Simon Askew to ride the rest of the rally without him on his highly modified Honda Dominator.

The prize for the most inappropriate machine of all, however, should probably go to Malcolm “Mally” Barnes and his pillion-passenger wife Amy. He has driven his 888lb Honda Rune cruiser all the way from Madrid and, despite the bike’s near six-foot wheelbase and value as a rare collector’s piece, manages to amaze other rallyists by making light work of the switchbacks and many battered tracks that form much of the route. “Most Runes sit in heated garages as part of highly polished collections,” says Barnes. “I thoroughly enjoy annoying other owners by getting mine filthy dirty and riding it on the type of roads it was never intended to see.” There is respect, too, for 37-year-old private equity fundraiser Joel Gindill who has entered the rally on his Ducati-based DB25, a recently acquired limited-edition race replica built by Surrey-based customising house deBolex (starting price £38,000) that he had ridden only 300 miles before the start. 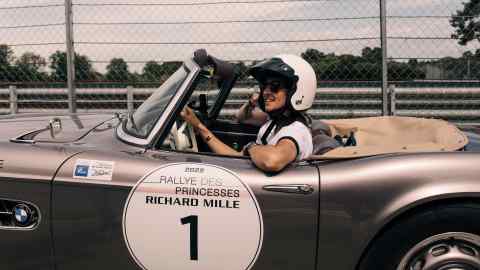 Whether tackling the fog-shrouded Furka Pass in Switzerland (scene of the famous car chase in the Bond film Goldfinger); sleeping by Lake Sils at the Maloja camp near St Moritz; traversing four miles of gravel hairpins to reach the Berghotel Chäserstatt where we sleep surrounded by snow-capped mountain peaks, or making the final, sun-drenched descent towards the finish line in Monaco, everyone agrees that this has been the six-day adventure of a lifetime. And even though McMeekin had those scary two hours in the Tunnel de Parpaillon, he applauds not only the trip but what the firm’s other events are achieving.

No surprise, then, that the announcement of upcoming rallies in the desert and to the Arctic Circle raises a cheer that could probably have been heard back at the start line in Austria.

READ MOREHTSI’s 12 top picks from a year in travel
Colm Tóibín’s Wexford: ‘This is not an Ireland of tourist posters’