The end of the office? Coronavirus may change work forever

In the world of social distancing, many of the world’s office workers have not seen their desks for weeks. But when coronavirus lockdowns finally ease, there may be fewer desks to return to.

Facing a sudden need to cut costs, chief executives have indicated in recent days that their property portfolios look like good places to start given the ease with which their companies have adapted to remote set-ups.

“The notion of putting 7,000 people in a building may be a thing of the past,” said Jes Staley of Barclays. “Maybe we don't need all the offices that we currently have around the world,” mused Mondelez’s Dirk van de Put, while Sergio Ermotti said UBS was already thinking about moving out of expensive city-centre offices.

A PwC survey this week found that a quarter of chief financial officers were already thinking of cutting back on real estate, while the Site Selectors Guild, whose members help companies locate new buildings, said half of US office searches had been put on hold since the crisis hit.

Tom Stringer, who leads accounting firm BDO’s US site selection team, said that while most of its projects were going ahead, clients were having serious discussions about cutting back.

“In six weeks we’ve taken almost the entirety of the back offices of corporate America and moved them to kitchens and living rooms and it’s been pretty seamless,” he said. “People are getting used to it. The stray dog or the kid wandering into the conference call is now accepted in corporate and governmental America.”

Many chief executives also seem not to miss the office.

“I have been so much more connected to 20,000 employees in the last six weeks than I have in the last six months thanks to the technology we are using,” said Jim Collins, of biotech and agriculture group Corteva.

Salil Parekh, of IT consultancy Infosys, said it had been easy for him to book in clients for video conferences from home, rather than having to travel to meet them. He saw little need for his employees to rush back, he said, and predicted that some would remain home workers.

Even Sir Martin Sorrell, the 75-year-old advertising boss who runs S4 Capital, said he had found working from home “energising”, and expected it to herald a “permanent change” to his working practices. The former WPP chief executive has already started ending leases at some sites.

“I spend around £35m on property in a year,” he said. “I’d much rather invest that in people than expensive offices.”

That is an alarming message for commercial property executives, who have been loudly casting doubt on the sustainability of remote working.

“Most of us have now experienced the inefficiencies of working from home and miss the connectivity and productivity an office environment provides,” Thomas Durels, an Empire State Realty Trust executive, remarked on an investor call earlier this month.

Jay Sugarman, chairman and chief executive of Safehold, used his real estate investment trust’s earnings call to rhapsodise on the virtues of the shared workplace.

“The daily work environment, the daily interaction, the social energy that's created that makes working for a company part and parcel of why you want to get up every day and give it your all, you just can't replicate working from home,” he said.

Office-focused Reits sold off by more than the broader US equity market in March and have struggled to rebound as quickly, remaining 23.3 per cent lower for the year against just over 10 per cent for the S&P 500.

Office bulls say that, at least in the short term, the need for social distancing will reverse commercial real estate’s “densification” trend, which for years saw more people crammed into smaller spaces.

“Our customers with dense layouts . . . are removing workstations and will return to work in a less dense environment,” said Owen Thomas, chief executive of Boston Properties, who predicted that some clients would even need more space as a result.

Chris Grigg, chief executive of British Land, agreed that the “first-stage recovery” from the pandemic would push tenants to “rejig” to less dense arrangements. He added that the office would have a future, albeit in different forms.

“There is a danger of groupthink,” he warned. “You have to bear in mind that there are some people struggling to juggle childcare or home schooling with their day job, and more junior colleagues who are sharing flats who think this is nothing short of a nightmare.”

Bosses and property owners say their immediate preoccupation is how to get workers back safely.

“How many people can work in the building if you limit the number of people in an elevator to two in a time?” asked Mr Staley.

Some companies report a shortage of perspex that can be used to separate desks, while the prices of masks and other safety equipment have risen sharply.

Others are talking about staggered returns and shift work, possibly spread over a seven-day working week, with offices only half-occupied to ensure sufficient distance between colleagues. That will present issues many people have not considered, said Michael Silver, chairman of Vestian, a real estate consultancy.

“You shouldn’t hit an elevator button. You can’t touch a metal door. You can’t share the same coffee pot with people . . . There needs to be a whole new protocol regarding returning to a safe, healthy workspace.”

Companies with different groups working in shifts, with some remote and others in the office, may need better IT infrastructure, he added. But if they also need less space, that could drive down commercial property values by as much as 30 per cent, he predicted: “Landlords will be renegotiating and rents will be settling down in a way we haven’t seen since the early ’90s.”

Others worry that offices, particularly skyscrapers, are simply incompatible with government guidelines for combating Covid-19.

“Moving 5,500 people vertically is a big challenge with current social distancing measures,” said Adam Goldin, head of UK business for CC Land, which owns the “Cheesegrater” tower in the City of London. “How do we support tenants to social distance in a 46-storey building? We’re working with all our tenants to support them as they start to return to work, but I don’t think any building has enough lifts to take one at a time.”

When FX Collaborative, a New York architecture firm, began planning to reopen its offices it discovered that social distancing rules would only let it accommodate about a quarter of its staff.

“To me, the real chokepoints are mass transit and elevators,” said Dan Kaplan, the firm’s senior partner.

To try to sort through some of the challenges, Mr Kaplan has been studying the experience of Chinese buildings, including the Wanjing Soho complex in Beijing designed by Zaha Hadid.

Among other measures, it now employs a thermal imaging screen in reception to determine the body temperature of anyone entering the building. Lifts have yellow tape reminding users to maintain safe distances and, like many in Asia since the Sars epidemic early this century, are disinfected hourly.

Executives say that coronavirus has accelerated trends already changing the workplace: hot-desking and open-plan shared spaces, flexible hours and use of technology to enable working from home.

Having seen the majority of his 40,000 UK staff work successfully from their homes, Jonathan Lewis, chief executive of Capita, told the Financial Times that he could envisage the UK outsourcer having “a smaller property footprint once the pandemic is over”. And the office spaces it kept would be used “less to house banks of standalone desks and much more to bring teams together to work collaboratively”.

Not everyone can or will want to work in such flexible ways, however, especially in heavily regulated industries such as banking.

“Every bank is going to use this as an experiment — do we need offices in the City and Canary Wharf?” said one banker. But, he said, “in reality it won't be that drastic. After all, life will go back to being very similar.”

But banks’ historic investments in disaster recovery sites are now also under review, having proved largely pointless during the pandemic. One banker, whose company invests heavily in business continuity sites that are mostly empty, said: “We are carrying that expense and infrastructure annually, [and] now looking at whether it is necessary.”

Scott Stephenson, chief executive of Verisk Analytics, is wary of predictions that the office will change for ever. Individuals may spend fewer days in the office because they like having no commute, he said, “but the other thing that we’re learning is that people do like going into the office. The workplace is one of their important communities, so there has to be a balance.”

Other considerations still argue in favour of the office, too. Pat Pettit and Rob Biederman, co-founders of online marketplace for freelance consultants Catalant Technologies, agreed that many of their young staff preferred working remotely. Even so, Mr Pettit added: “I have a three-and-a-half-year-old and an 11-month-old so I will be sprinting back to the office the day I can.” 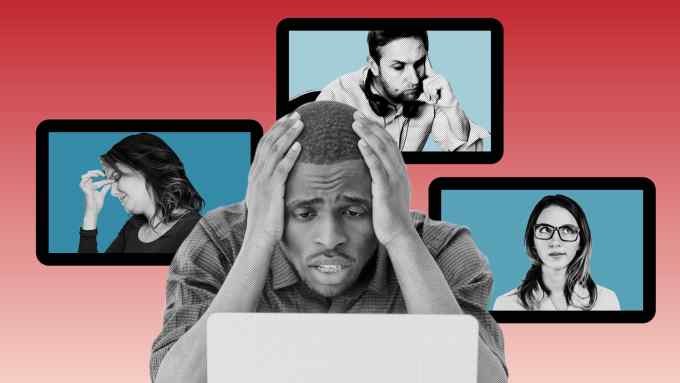