Banking: the great return to the office

Antibody testing, temperature monitoring and social distancing are among the challenges ahead

Jim Esposito, co-head of Goldman Sachs’ securities division, does not know when his team will begin moving back to its London office near a largely deserted Fleet Street. But he is sure of one thing: he will not be among the first to resume the daily commute.

Wanting to dispel any notion that “all of our senior employees need to hurry back into the office”, Mr Esposito is planning to split his time between the bank’s London headquarters and his home — where he shares the WiFi with three teenage sons.

Striking the right tone with staff is just one of the many challenges facing bank bosses from Wall Street to the City of London and Hong Kong’s Central district as they pave the way for a return to offices after an unprecedented months-long period of widespread working from home to curtail the spread of coronavirus.

Banks are also weighing up the merits of testing staff for Covid-19 infections and potential antibodies; deciding which teams come back to the office and when; and working out how to deal with restricted public transport and schools that remain closed.

“It was obviously easier to get us out,” says Leon Kalvaria, New York-based chairman of Citigroup’s investment bank. “The comeback requires a much more complex set of decisions to be made.”

Testing is one of the most sensitive issues. A member of the management committee at a large US bank said it was willing to buy tens of thousands of antibody tests for its staff — despite being concerned at varied reliability. “It’s not clear how relevant testing is,” he said. But it could “provide comfort” for those who take a test.

Top executives are also concerned about the public relations pitfalls if they are seen to be competing for testing resources with hospitals. “If the NHS can’t get tested and bankers can, that wouldn’t look good,” said a senior London-based executive at another large Wall Street bank. One option would be to “do it for ourselves and other people” — such as vulnerable members of the community, he added.

Like other businesses, they must also balance the demands of employees, which span two extremes: those who are keen to get back to the office and those who are highly anxious.

Barclays chief executive Jes Staley warned last month that “putting 7,000 people in a building may be a thing of the past”, as social distancing efforts limit the numbers in elevators at the same time and force desks to be more spread out.

In a memo to staff last week, JPMorgan Chase warned that it would take “weeks” to prepare offices globally for reopening, and the return would be staggered.

Mr Kalvaria said Citi’s return to the office would be “gradual”. Goldman’s Mr Esposito said it would be running a “hybrid business model” of people working at home and the offices around the world “for quite some time”. And last week Credit Suisse outlined a four-phase plan for returning to the office, with many continuing to work from home “in the first weeks and months”, according to a staff memo.

Asia is in a different phase. Goldman had 35 per cent of its Hong Kong staff back in their offices this week and hopes to allow 50 per cent to return by the end of the month.

Drawing on the experiences of Hong Kong, where temperature checks and thermal body scanners have been the norm in office buildings for months, financial institutions have been composing their own reopening checklists. As well as monitoring temperatures and handing out masks and sanitisers, this includes controlling the flow of people in and out of common areas like canteens, and restricting the use of auditoriums and large conference rooms.

Those who do return to the office will be faced with a drastically different environment. In line with social distancing guidelines, every other desk will typically be left empty; and lifts, lobbies and other common areas will have capacity scaled back to facilitate social distancing.

“Normally [trading teams] all sit together on what we call ‘the desk’,” said Jan Metzger, Asia-Pacific head of banking, capital markets and advisory at Citi. “I’ve exploded it and put them in four different corners of the room.”

The return of traders and market-makers to the typically bustling trading floors in London and New York is likely to be prioritised. Their physical infrastructure is both regulated and designed for maximum efficiency, presenting unique challenges to recreate at home.

“What we’re missing is some of the general day-to-day flow of information,” said Marc Bailey, chief executive of Sucden Financial, a broker. “We’re finding it harder to pick up on.”

Meanwhile, investment bankers will have to wait longer to get back to their desks. Carlos Hernandez, executive chair of investment and corporate banking at JPMorgan Chase, said this was not a problem. “Bankers can work from home, we’ve demonstrated we can do that.”

JPMorgan has led $600bn of investment-grade financing so far this year, all of it done through virtual roadshows. “Do we need to do a lot of stuff the way we did it in the past?” asked Mr Hernandez. “Absolutely not.”

Travel restrictions for the foreseeable future mean that globe-trotting investment bankers will not be able to move around like they used to. Mr Hernandez said he expected that when clients did insist on seeing bankers in person, they would want far smaller teams to minimise the risk of infection.

This meant that bankers at JPMorgan and elsewhere were likely to spend more time in their own offices, he added — but those offices did not have to be at JPMorgan’s 383 Madison Avenue headquarters. They could be in their homes, or at the bank’s satellite offices nearer to clients.

Some of those going back to the office may return to their banks’ secondary sites if these locations are nearer to their homes. Known as disaster recovery centres or business continuity plan sites, they are typically located outside of city centres in places like Basingstoke (JPMorgan) and Croydon (Goldman Sachs) in the UK, and Westchester (Morgan Stanley) or Rutherford (Citi) outside of Manhattan.

Meanwhile, as restrictions globally start to ease, and with a mass-produced vaccine out of reach for now, bank bosses are conscious of a looming threat hanging over them: a second wave of coronavirus cases could send everyone back home again.

With this in mind, they are not taking any chances. Goldman’s traders and salespeople would keep their screens, phones and other equipment at home for now, said Mr Esposito. “It is too early to predict the long-term implications of this work-from-home environment, but we don’t want to give up the optionality.”

If traders’ families do not like the unsightly screens taking over their living rooms “they can put them in the cupboard”, said the senior executive at the second bank. “It would be foolish to spend any effort to dismantle any of this until we’re truly out of the woods.” 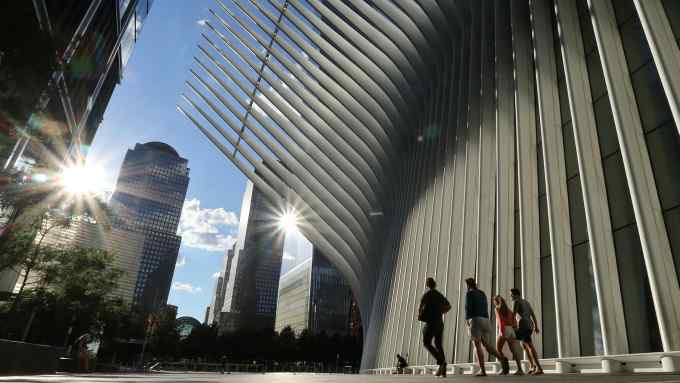