Crystal caps and traditional trenches: Burberry has everyone covered

If you didn’t already know that Burberry is the biggest brand in the London Fashion Week schedule by far, then you’d soon guess from the production values. Guests took their seats in near darkness, opposite a huge mirrored screen which rose up as the music started to reveal a dramatic white art installation of speakers and funnels. And then there were the guests: Carla Bruni and Isabelle Huppert sat front row along with of-the-moment singer Dua Lipa.

Designer Riccardo Tisci, who was appointed in 2018, said he wanted to create something for everyone, of all ages, in his Burberry collection. And so there was a cross section of daywear, streetwear, eveningwear and tailoring, from a branded sweatshirt to a cocktail minidress covered in white feathers for the finale.

So far his tenure is going well. Burberry revealed in July that its like-for-like revenues rose by 4 per cent in the three months to June 29, compared with the same period last year, which was double what analysts had anticipated.

Tisci explained, “I don’t think it’s modern for brands to just do one thing anymore — I want our customer to be able to buy a T-shirt or trainers and be a part of Burberry, just as much as I want to offer a beautiful evening dress.”

The Italian designer, who elevated T-shirts, sweatshirts and trainers to high fashion, making them must-have items while he worked at Givenchy, added: “I have street style in my blood but I also trained at one of the most prestigious fashion schools in the world where I learnt to specialise my craft. This duality is part of my DNA and will always come out in some way in my designs.”

So streetwear pieces included oversized anoraks in black and white with obvious Burberry branding, slouchy shirts with a blurred black and white stripe, and logo sweatshirts. Accessories included mini bags worn on a harness and baseball caps with exaggerated brims.

Decadent touches appeared on the streetwear, so one baseball cap had crystal fringing at the front, a tee was layered over crystal sleeves, and lace was laid over a men’s grey jersey tee and shorts. And equally, tailoring had streetwear and eveningwear accents. A camel blazer worn by a model in a hijab featured a sparkly pinstripe, and a black trouser suit had chains in place of a tuxedo stripe. Men’s suits came with various twists such as oversized patch pockets.

The trench too came covered in crystal clusters, while other versions had silk scarves attached. Other more classic Burberry pieces included skirt and trouser suits in grey and biscuit shades in a nod to the more bourgeois looks of his previous shows. Overall the show included more typically Tisci touches such as Victoriana, one example was a sheer lace ruffled blouse bearing the word “unicorn”.

“I really see this as an important collection for me at Burberry — the first two shows were about defining the codes for the house, and this is about starting to write my first chapter,” explained Tisci. Those shareholders will be hoping for a bestseller. 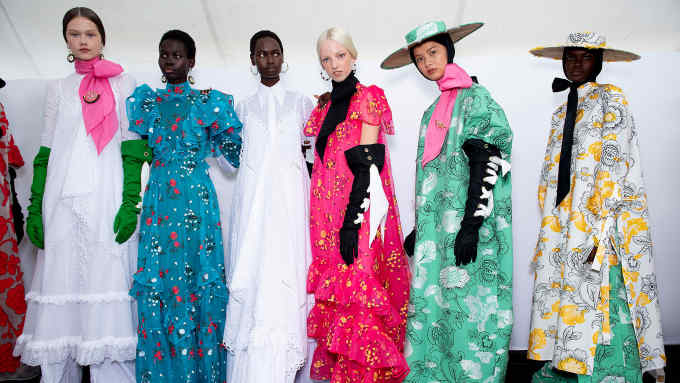