From crockery-inspired dresses to a bright red maze, designers offered a visual feast

The 19th-century Irish Wren boys, who traditionally would hunt the wren on St Stephen’s day, knocking on doors to sing for money, provided the starting point for Simone Rocha’s Spring/Summer collection.

The show was staged in the round at the vast Alexandra Palace, North London. Rocha deliberately chose it because “the wren boys often chanted and sang in a circle, so it was important for it to be that way”. It made for a magical setting: atmospheric crumbling columns and ornate plasterwork and impossibly high ceilings surrounded the audience and models while booming traditional Irish music was played on surround sound.

Rocha’s signature lace dresses were once again a key feature, albeit more voluminous than previous seasons: “I wanted the dresses to reflect the swooping curving dive of the bird,” said Rocha backstage. Wedgwood china-inspired fabric featured heavily on dresses, petticoats and trousers, while another matching puff-sleeved top and trouser looked as if they were made of tablecloth. The whole collection felt homely and surprisingly warm despite its colour palette of white, black and blue.

There were plenty of crystals and beading too, which appeared on Rocha’s pointed-toe mules with crystal cut heels while dresses and raffia-woven handbags and Jasperware clutches featured white pearl detailing. Ruffles were everywhere: beige trenchcoats had them across their fronts or along hems while white nightgown dresses had peplum dropped waists.

The Wren motif was also daubed on to the models brows where Fairy Wren and blue tit feathers (a symbol of this merry band) were painted, uniting all like a tribal cult.

The Chalayan show opened with a model in a rather charming silver-pleated cocoon which concealed her whole body, several dresses featured built-in ski poles and others had what looked like tent poles laced through the back. Dubbed “postcolonial body”, the show, set on the stage at Sadler’s Wells, was “a study of dance and movement amongst various ethnic groups that have been colonised by western forces.”

However, despite a typically conceptual streak, the show was brimming with highly wearable clothes. Hussein Chalayan’s vision is so persuasive that his collections make everything else seem quite fussy and liable to date quickly in comparison. Kimono-like dresses with rolled sleeves in pale khaki cotton or a grid pattern were beautifully simple, while loose, silk dresses, some in kaftan shapes, some in monochrome, offered eveningwear options for anyone who likes to keep it low-key after dark.

For Spring/Summer Howell kept to her usual code of conduct, easy-to-wear suiting and blazers in shades of tobacco, camel and navy, there were plenty of knitted fisherman hats and knee-high socks and all models walked in open toed brown leather sandals.

The introduction of print made for a nice touch against the muted tones, a burnt orange button-up dress and shirt looked had a pretty brushstroke print, while a black and white oversize gingham dress was given an added feminine touch with an exaggerated black frilly collar.

One of our favourite looks was a slouchy cream cardigan style over white high-waisted carrot shaped trousers. It looked effortless and oh-so-comfy.

The queen of the instagrammable presentation has delivered another hit this season with her Post Box Maze. Inspired by MC Escher’s mural, designed for the Hague post office, this red maze inside the Brewer Street Car Park marks the launch of the post box bag, which Anya Hindmarch has been working on for two years. First: the maze. Imagine a bright red, non-rusty Richard Sera installation, and the red room in Twin Peaks and you have the maze. The bags, meanwhile, which were also shown at Brewer Street, have a little gold-framed opening at the front which was technically challenging to construct but has a pleasing vintage glamour, and come in pillar box red, black and marine blue, as well as velvet and snake. While the presentation may be quirky, the bag itself is sophisticated.

Japonisme was the starting point for Preen by Thornton Bregazzi. The duo looked to the East and combined it with their usual folky style. Ruffled and sheer multicoloured dresses were worn over Japanese manga cartoon T-shirts and long-sleeved tops. While delicate cherry blossom lace featured on a particularly beautiful asymmetric black dress.

One of our favourite looks came at the very end, a floor-length cerulean blue gown with pleated chiffon tiers which bobbed and moved as the model walked. 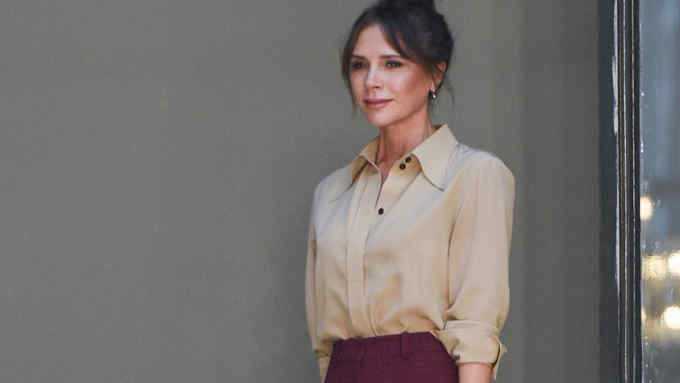