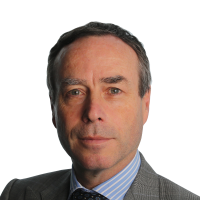 Lionel Barber is the former editor of the Financial Times. As editor from 2005 until January 2020, Barber helped to transform the FT from a newspaper publisher into a multi-channel global news organisation. During his editorship the FT won many international awards for its journalism.

Barber has co-written several books and has lectured widely on foreign policy, transatlantic relations and economics. As editor, he interviewed many of the world’s leaders in business and politics, including: US President Barack Obama, Chancellor Angela Merkel of Germany and President of Iran Hassan Rouhani.

Barber began his career in journalism in 1978 as a reporter for The Scotsman. He then moved to The Sunday Times as a business correspondent and joined the FT in 1985 as a business reporter. During his FT career, he has also served as Washington correspondent, Brussels bureau chief, news editor, European editor, US managing editor and the editor.

Barber serves on the Board of Trustees at the Tate and the Carnegie Corporation of New York. He graduated in 1978 from St Edmund Hall, Oxford University with a joint honours degree in German and modern history and speaks fluent French and German.