Market grows for ‘regtech’, or AI for regulation

Hedge fund managers beware, someone is watching you. Or rather, something is watching you. A new artificial intelligence system can monitor traders, learn their behaviour patterns and raise the alarm when they do something out of character.

For example, a trader who has avoided securities for a long time after suffering a loss on them suddenly dives back into a losing position. This triggers an alarm in the monitoring system and sends an alert to the hedge fund’s compliance team.

Welcome to the world of regulation technology or “regtech”. The term itself has taken off since former UK chancellor George Osborne raised it in last year’s budget, promising to support “new technologies to facilitate the delivery of regulatory requirements” to the financial services sector.

Companies such as Sybenetix are riding a wave of interest in using technology — such as cloud computing, artificial intelligence and biometrics — to help the financial services industry meet the tsunami of regulation unleashed since the 2008 banking crisis.

“By making compliance less complex and capacity-demanding, regtech solutions could free capital to put to more productive uses,” the Institute of International Finance (IIF) said in a recent report on regtech. It could also make it easier for new companies to enter the market, the IIF said, and make regulation work better.

The potential market is huge. Big banks, such as HSBC, Deutsche Bank and JPMorgan, spend well over $1bn a year each on regulatory compliance and controls. Spanish bank BBVA recently estimated that on average financial institutions have 10 to 15 per cent of their staff dedicated to this area.

“Banks are switching to be really data-driven companies — that will be one of the biggest drivers for the industry in the next few years and regtech will be part of that,” said Álvaro Martín, chief economist for digital regulation at BBVA.

Regulators are keen to encourage regtech, led by the UK’s Financial Conduct Authority, which last year issued a “call for input”.

Fintech
UK regulators are the most fintech friendly 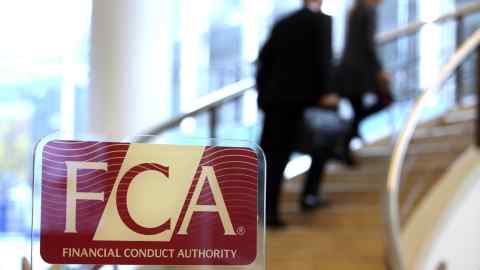 In response to the feedback it received, the FCA this summer said it planned to increase collaboration with regtech companies, “using our convening authority to help bring together market participants to work on shared challenges; and to act as a catalyst for change.”

Regtech companies are focused on solving several different problems — the IIF identified at least seven. One of the biggest is modelling, scenario analysis and forecasting, on which banks spend huge amounts of money, particularly to complete regulators’ ‘stress tests’.

Last year, Citigroup used an artificial intelligence system from Stanford University spinout Ayasdi to help it pass the US Federal Reserve’s stress test, having failed it the previous year. Ayasdi’s system — also used by the pharmaceuticals industry — uses topology, a sub-field of mathematics that studies shapes, to recognise patterns in data and find complex relationships.

A second area of focus is risk-data aggregation, which involves gathering and analysing information on capital and liquidity for use in internal models and in reports to regulators. An example of a start-up focused on this area is Suade, which was founded two years ago by former Barclays trader Diana Paredes and ex-Nomura banker Murat Abur. It provides a platform that keeps banks in line and up-to-date with the latest prudential requirements.

“Regtech indeed has become its own sector since we first started addressing it in 2014,” says Ms Paredes. “But ultimately it is about making the financial system more efficient, transparent and stable which is what everyone, from regulators to ordinary people, and even the bankers want.”

A third area is customer identity. Speeding up the process of signing up new bank customers and making it more user friendly is what Onfido aims to achieve. It has already raised over $30m and won business from the likes of Nutmeg, Deliveroo and Just Giving.

Sybenetix is one of many companies focused on a fourth area: conduct monitoring. Taras Chaban, the former GLG fund manager who founded Sybenetix in 2009, says that by learning each trader’s personality and being more precise in flagging up suspicious trading, its system avoids a lot of costly false alarms.

He expects new regulation, such as the incoming Mifid II rules for investment services in Europe, to drive more demand for its software. “The banks will have to collect much more data on trading for regulators than currently required — that’s really exciting for us.”

But as well as cutting costs, he says regtech has a wider benefit for the system. “One important point for me is how we help all the small organisations who will find it hard to meet the new requirements from regulators and that could lead to the creation of even larger banks and asset managers, which is what I fear as it would make them even more too-big-to-fail.”