Boris Johnson’s hopes of leading Britain out of the EU on October 31 were hanging in the balance on Thursday night, after he secured a Brexit deal in Brussels but faced the threat that it could be scuppered in the House of Commons within 48 hours.

The Democratic Unionist party said it would oppose the deal, which would introduce customs barriers between the region and the rest of the UK, as relations between the Northern Ireland party and Mr Johnson descended into acrimony.

Mr Johnson told colleagues that without the support of the 10 DUP MPs for his deal, which was agreed swiftly in Brussels on Thursday after months of haggling, he could not be certain of winning a crucial Commons vote on Saturday.

The prime minister’s decision to strike a deal in Brussels without DUP support — Number 10 has had minimal contact with the party since Wednesday night — represents a massive political gamble.

He hopes to force the DUP and other MPs critical of the Brexit deal to back the deal on Saturday or face the prospect of a no-deal exit.

News in-depthHouse of Commons UK
Does Boris Johnson have the numbers to pass Brexit deal? 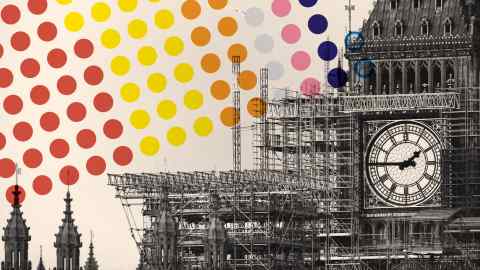 Jean-Claude Juncker, European Commission president, said there would be no extension to the Brexit process beyond October 31, and one British minister said: “They don’t like this deal — they’re categorically against no-deal. It’s their choice.”

But Donald Tusk, president of the European Council, refused to rule out a further extension to the UK’s exit date and said he would consult with EU27 member states on any request for an extension. If Mr Johnson’s deal fails, member states are expected to approve a delay to Brexit to avoid a disruptive no-deal exit.

Nigel Dodds, deputy leader of the DUP, said the UK prime minister was “too eager by far to get a deal at any cost”, because of his determination to avoid an extension to the Brexit process.

Meanwhile, Labour and other MPs from the so-called “rebel alliance” stepped up efforts to put any deal to a second referendum.

If Mr Johnson’s deal fails, they plan to revive former prime minister Theresa May’s old deal — with added guarantees on workers’ rights and climate change — and put that to a referendum instead.

In an attempt to head off that move, Mr Johnson’s allies said that protection for workers and the environment had been added to the new withdrawal agreement bill. The prime minister, who flew back to London on Thursday night, will try to sell his new package to Labour MPs on Friday.

Mr Johnson only secured a deal in Brussels — replacing the one agreed by Mrs May last November — after agreeing to a new customs border inside the UK between Northern Ireland and mainland Britain, incurring the wrath of the DUP.

Mr Johnson insisted on arrival in Brussels that it was a “reasonable and fair” outcome that would preserve peace in Northern Ireland. The new EU withdrawal treaty means there will be no customs or regulatory land border on the island of Ireland.

DUP MPs could be crucial to determining whether Mr Johnson can pass a deal through the Commons at a special sitting on Saturday. Some Tory Eurosceptics may refuse to back the deal unless the DUP can endorse it.

In a statement on Thursday, the DUP said: “These proposals are not, in our view, beneficial to the economic wellbeing of Northern Ireland and the integrity of the Union.” The party said it was “unable to support these proposals in parliament”.

Sterling swung wildly during the day, nearing $1.30 in reaction to initial news of the agreement before dropping as low as $1.276 in afternoon trading after the DUP said it would not support the new deal. In early evening trading it was a little higher at $1.28

Mr Johnson’s negotiating team has accepted that, following Brexit, Northern Ireland would apply the EU’s customs and tariffs rules and have them overseen by the European Court of Justice. The agreement means there would not be significant customs checks on the island. Instead, all goods would be checked in mainland Britain.

The plan bears similarities to the Northern Ireland-only backstop the EU put forward in February 2018. That idea was superseded by Mrs May’s alternative all-UK backstop idea which was then rejected three times by the UK parliament. 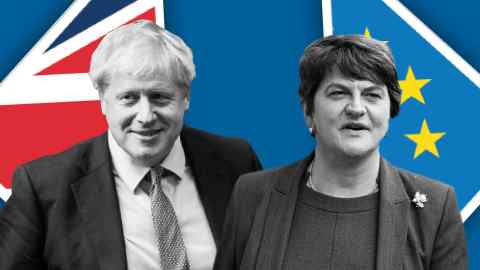 Under the agreement, Northern Ireland would benefit from UK trade deals with third countries — a key demand of Mr Johnson — and Northern Irish businesses would be eligible for a rebate on some tariffs. But the system would still entail the creation of a significant border between mainland Britain and Northern Ireland.

A key problem for the DUP is the plan to let the Northern Ireland assembly opt out of the proposed customs and regulatory system. Brussels negotiators settled on a complex system that would reduce one party’s ability to ditch the arrangements. It would involve the Northern Ireland assembly at Stormont — which is currently suspended — having the opportunity to vote on the customs and regulatory agreement four years after the end of the UK’s post-Brexit transition period.

If the assembly decided to continue with the regulatory and customs system, further opportunities to vote would arise in later years — but the arrangements would continue if the assembly was not sitting. Even if Northern Ireland were to vote to junk the system, a two-year cooling-off period would ensue.

Video: How Brexit hopes and fears are moving the pound