Are the changing rules of work good for women?

Covid is rewriting ways of working but with little consensus on best practice. Plus: win a free executive MBA

When the pandemic struck, companies had to rethink their business models, but they also had to think about how employees do their work.

Overnight, corporate inertia over flexible work arrangements — which in many cases was outright resistance — dissolved, as white-collar workers were forced to take their laptops home to spare rooms and kitchen tables.

It seemed Covid-19 had introduced an era of workplace empathy as managers sought to accommodate teams juggling work alongside home-schooling, caring for shielding relatives, or managing their own health issues.

Jane van Zyl, chief executive of Working Families, a UK non-profit advocacy group, says: “In the best examples, that has meant listening to their employees’ needs and bringing in flexible hours, job shares, remote working — or a combination of these measures. This is really positive for anyone with caring responsibilities. Nine out of 10 people we surveyed want to keep flexible working post-Covid.”

Some employers have found it easier to keep in touch with those on parental leave. Dawn Childs, UK change director at utility National Grid, says: “Keeping the option of online check-ins during maternity leave, to help colleagues stay connected during this time, is certainly something we’ll continue.”

Nonetheless, the pandemic hardly augurs a remote working utopia. Those with caring responsibilities were vulnerable to job losses and furlough. Working Families says 85 per cent of inquiries to its helpline over the past year were from women, and 60 per cent of those were from low-income backgrounds.

Many spoke of their struggles with the “hidden labour” involved in homeworking, says van Zyl: “The cooking and cleaning and emergency childcare is falling to them rather than to their partners, which is having a major impact on their ability to do their jobs properly and to progress in their careers.”

Such strains should be factored in to performance reviews and job moves. Gemma Dale, a human resources consultant and author of Flexible Working, says there is “an unlevel playing field” now. “Women may not be able therefore to perform as they would wish,” she notes. “Are organisations thinking about the legacy of that, and what it will mean for women’s careers in the longer term?”

A report by Boston Consulting Group on 14,100 caregivers and parents across six countries — the US, UK, Italy, Germany, France, and Spain — found that more than half of parents said their home responsibilities had increased during the pandemic, while their work performance had decreased.

Across all countries, some 43 per cent of mothers of children under 12 (compared with 36 per cent of fathers) believed they were at a disadvantage to colleagues who did not have children. Meanwhile, 36 per cent of European mothers and 48 per cent of those in the US felt that their employers had supported them during the pandemic.

But not all are open about their situation. A survey of 1,000 US working parents on the impact of Covid, carried out by Catalyst, a non-profit advocacy group, found that 41 per cent of mothers and 36 per cent of fathers hid their caregiving struggles.

Nonetheless, there is evidence that the pandemic has prompted men to lean into the domestic sphere. A report by Birmingham University found an increase in the “number of couples who indicate that they have shared housework [and] care activities during lockdown”. This was marked among fathers who had taken more than the UK’s statutory two weeks of paternity leave.

Gender politics
“I am probably going to quit my job”: Mothers leave workforce to cope with pandemic parenting 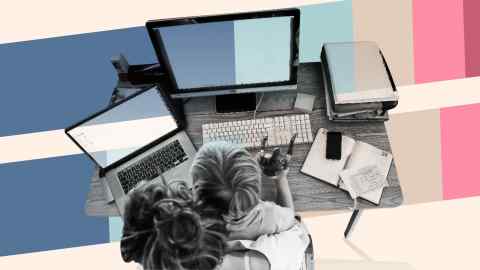 For decades, flexible work has been stigmatised as a woman’s — or, more specifically, a mother’s — issue, with part-time or work-from-home days considered as career-ending death. But the pandemic has helped to normalise flexibility for all.

There are downsides. Working at home may lead to hidden work intensity. As van Zyl points out, “if there is still . . . a culture of ‘presenteeism’ online, remote working can be just as incompatible with family life as a daily commute”.

Redesigning jobs may be key to helping workers manage their workload. The point, says van Zyl, “is being clear about what that work should produce and trusting people to deliver it, in whatever way makes the most sense and allows them to do their best work”.

Most surveys find that men and women want to retain homeworking as part of the mix, alongside office working. One risk, though, is that those working at home are left out of decision-making.

Sarah Jackson, visiting professor at Cranfield University School of Management, says workers who are not visible get forgotten. Women’s careers slow down when they work part-time after having a child, she says. “Partly, because you’re not there as much. What the research shows is that interesting projects are divvied up and go to the person sitting there in the office.”

Catalyst’s research on workplace gender equity in the US amid the pandemic found that 45 per cent of female business leaders said it “is difficult for women to speak up in virtual meetings”. Similarly, 20 per cent of women said they have been overlooked by colleagues in video calls, and the same proportion believe they have witnessed more workplace discrimination since the pandemic started.

Dale says the problem with hybrid arrangements so far is there is no best practice yet, “or even many ideas about how this will work in practice. Hybrid [working] is much, much more messy than all-remote. It requires significant effort and a whole new range of management skills.

“It also needs decent tech,” she adds. “Unless you have tech that creates ease of connectivity between those at home and those in the office, hybrid won’t work.”

Ultimately, the best strategy, suggests Jackson, is for teams to sit down together and devise a protocol, setting out availability and contactability. They need to be clear about when the team needs to be gathered together in the same location. “Done right,” she says, “it will make people work more effectively.”