“Don’t do stupid shit.” With the last word turned demurely into “stuff”, this became known as the “Obama doctrine”. It reflected the lessons Barack Obama had learnt from his presidential predecessor’s unnecessary Iraq war. For many, the doctrine was defeatist. Today, I see its merits. It would be wonderful to see intelligent action in response to our many challenges. Yet, today, application of the Obama doctrine would be a relief.

This is true, not least, for the world economy. As Kristalina Georgieva, the new managing director of the IMF, said in her curtain raiser for this week’s annual meetings in Washington DC: “In 2019, we expect slower growth in nearly 90 per cent of the world. The global economy is now in a synchronised slowdown.” Joint research by the Brookings Institution and Financial Times is bleaker still, describing our situation as “synchronised stagnation”.

What is driving this slowdown, particularly stark in industry and trade? A big part of the answer seems to be rising uncertainty. This, argue the Brookings authors, is due to the “persistent trade tensions, political instability, geopolitical risks, and concerns about the limited efficacy of monetary stimulus”. Such uncertainty has, notes Gavyn Davies, become “entrenched”.

Crucially, risks are all on the downside. The trade conflicts between the US and its principal trading partners might get worse. If so, integrated supply chains, not least in high-tech products, could be badly disrupted. Brexit may be chaotic. Geopolitical risks also abound, especially in the Middle East, but also in Asia. Above all, relations between the US and China are worsening. Significant financial fragilities exist too, notably the high debt of non-financial corporates. The threat of cyber attacks remains, as does mega-terrorism. We persist in failing to tackle climate change.

Depressingly, much of what threatens the world economy is due to “stupid stuff”. Donald Trump’s trade policy is wrecking the underpinnings of the postwar trading system, thereby creating huge uncertainty, in pursuit of the silly aim of bilateral balancing. Brexit is stupid: it will destroy a fruitful partnership with the UK’s neighbours and partners. The burgeoning friction between Japan and South Korea is stupid, too: it weakens both countries in a region ever more dominated by China.

We are collectively playing with fire. Worse, we are doing so while living in a flammable building. As Lawrence Summers tells us, the danger is not so much a global economic slowdown, as the difficulty of doing much in response. In this context, the recent shift in Federal Reserve policy, towards lower rates, and the associated decline in interest-rate expectations are particularly telling. Even in the US, it was impossible for the Fed to raise the short-term rate above 2.5 per cent in this cycle, before cutting it. In other big high-income economies, the room for a conventional policy response to a slowdown is still more limited.

Importantly, this tells us that structurally deficient aggregate demand, on which some of us have been writing since before the 2007-08 financial crisis, remains pervasive. This forces us to recognise not just the “nationalist-populist-protectionist” stupid stuff noted above but, as lethal, the “austerity-as-secular-religion” stupid stuff. This shows itself not only in terror of aggressive monetary policy, rightly rebuffed by former president of the European Central Bank Jean-Claude Trichet, but in the refusal to accept the alternative, namely, fiscal policy. People are petrified of government borrowing even though lenders are prepared to pay for the privilege.

It is elementary economics that prices matter. The astonishing fact is that the six largest high-income economies, including now even Italy, can borrow for 30 years at a fixed nominal rate of close to 2 per cent, or less, and so at zero-to-negative real rates, provided central banks deliver on their inflation targets.

One has to be desperately pessimistic about growth prospects to believe it is impossible to manage substantial borrowings, on such terms. This is especially true if borrowing was used to produce high-quality human, intangible and physical assets. A fixation on eliminating budget deficits, in this context, is really stupid stuff. Should real rates rise again, this would reflect better perceived opportunities and so justify (and facilitate) curbing government spending. Meanwhile, the low cost of past borrowings would be locked in. Moreover, as Olivier Blanchard has noted, it is usual for safe interest rates to be below growth rates. Today seems to be just an extreme version of this reality.

These are fragile times. Some of that reflects the wave of populist nationalism that is now sweeping across high-income countries. But some of it reflects sterile orthodoxy. A modest slowdown is one thing. But a sharp slowdown we refuse to deal with, because of stupidity, would be another thing altogether.

As Ms Georgieva argues, we do need a “renewed commitment to international co-operation”. This is also the theme of a recent compendium from the Bretton Woods Committee. Today, however, that might be too ambitious. But we could at least stop doing the stupid stuff. 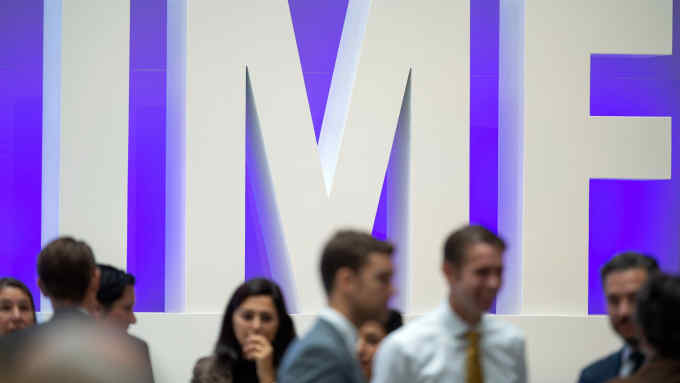 The IMF and World Bank met in Washington while European leaders gathered in Brussels. Largely self-inflicted blows to the world economy mean a change of course is needed — but will policymakers seize the opportunity? Here’s the best of this week’s opinion and analysis