Peter Campbell in London and Kana Inagaki in Tokyo

Nissan is exploring building new models at its Sunderland site, said people familiar with the company’s planning, after the Japanese company’s second-in-command said the Brexit deal had secured the future of Britain’s biggest car plant.

Chief operating officer Ashwani Gupta said the agreement between the EU and the UK had created a “positive environment” that puts the Japanese carmaker at an advantage over rivals than import models to the UK.

Two people familiar with internal Nissan deliberations said the company has started to discuss adding new models to Sunderland, which is running at just over half its potential capacity.

Mr Gupta told the Financial Times it was “too early” to allocate new models, but added: “Of course, we will explore more opportunities, but the customer should drive it, and business should drive it.”

The good news is it [the deal] is positive. Moving forward, we want to see it as an opportunity.

Both the Nissan X-Trail sport utility vehicle and the new electric Ariya car could be manufactured at Sunderland, according to manufacturing experts and company insiders.

Mr Gupta announced that some job-creating moves are already in train: Nissan will shift more battery production to the UK to avoid its electric Leaf car being hit by tariffs when exported to Europe.

The company will relocate production of a 62Kwh battery for the Leaf to Sunderland in the coming months, on top of the 40Kwh battery already made at the site. This allows all of Nissan’s cars produced in the UK to meet requirements for locally manufactured components to avoid tariffs, Mr Gupta said.

Although Mr Gupta said the company has not been affected by port disruption following Brexit, Nissan said production on one of the plant’s two manufacturing lines will halt on Friday because of parts shortages caused by the pandemic.

Under the Brexit deal, carmakers in the UK can avoid tariffs when selling to the EU if enough parts come from either market.

Nissan also believes it has an advantage when selling to UK customers, as cars from rivals are likely to become less competitive because of non-tariff barriers leading to price rises.

“We have got the competitiveness as a home maker,” he told the FT. “The good news is it [the deal] is positive. Moving forward, we want to see it as an opportunity.”

His upbeat comments are in stark contrast with earlier warnings from Nissan that tariffs with Europe would “jeopardise” its export-driven operations at the site, which employs nearly 6,000 people.

While the UK car industry has broadly welcomed the deal, Vauxhall’s parent company this week warned investment at its Ellesmere Port site in Cheshire was at risk because of Brexit costs and Britain’s planned phasing out of new petrol-only car sales by 2030. 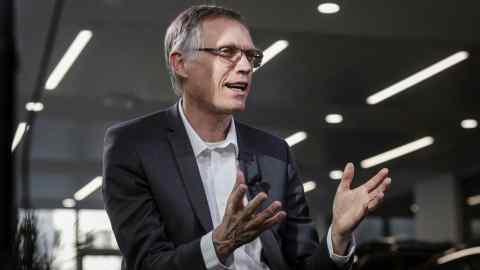 But Mr Gupta said the petrol phaseout was “fully aligned” with Nissan’s own ambitions, which already include producing some batteries in the UK.

The company will start production of the latest Qashqai model at Sunderland in the coming months, including a hybrid version as part of its plan to offer them along with all petrol cars by the end of 2023.

The group has invested £400m in the plant since the Brexit vote in 2016 in preparation for the model.

It previously planned to make the X-Trail sport utility vehicle in the UK, but reversed that decision in 2019 in part because of Brexit uncertainty.