● This article was updated on February 22 with a footnote in response to false statements by Mr Malloch.

Oxford university has distanced itself from the political scientist who wants to be Donald Trump’s ambassador in Brussels, accusing him of falsely claiming to be a fellow at two of its colleges.

Ted Malloch, who has compared the EU to the Soviet Union, taught at Oxford’s Saïd Business School until last year. He has appeared regularly on British television since the US election in November, often billed as a likely Trump appointee.

This week the FT identified a number of misleading statements in Mr Malloch’s autobiography, including claims that he was “knighted” into the Sovereign Order of St John by the Queen and called a “genius” by Margaret Thatcher. Mr Malloch said the FT was “involved in political assassination”.

The FT has found further signs that Mr Malloch — whose specialist subjects include business ethics — has exaggerated his academic and diplomatic credentials. 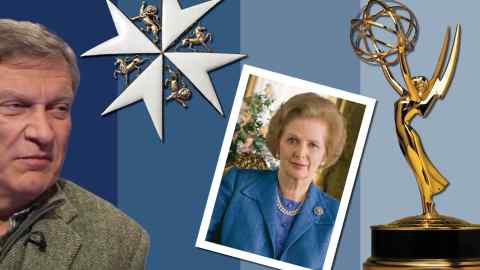 Mr Malloch was a visiting academic for two years but “he very rarely visited the college and did not see through any of his plans for research activities in the college”, added the university, which is usually reluctant to criticise former staff.

An online CV for Mr Malloch — which contains his correct mobile phone number and email, and which he did not deny preparing — also states he was a fellow and director of an international summer school at Pembroke College, Oxford. Pembroke College told the FT that this was incorrect. Mr Malloch said he had “receipts of payments proving” his work there.

The CV also states that Mr Malloch has written extensively for The New York Times, the Washington Post and The Economist. No record could be found of him having done so. Asked by the FT, he declined to indicate any articles. Mr Malloch said he had “organised a number of conferences for which papers were done for The Economist”.

Mr Malloch’s mooted appointment as a US envoy and his frequent appearances on the BBC have alarmed Brussels officials, who fear the Trump administration wants to undermine the EU. Mr Malloch told the FT last month that other countries would follow Britain out of the bloc and said people should “short the euro”.

He has built his credibility on associations with a wide variety of well-regarded institutions, from Yale University to the World Economic Forum. However, many of his roles have ended after two years or less.

In publicity statements about, and by, Professor Ted Malloch, he is described as having been a ‘senior fellow of Wolfson College’. This is inaccurate

His longest-serving role appears to be as “chairman and CEO” of the Roosevelt Group, “a leading strategic advisory and thought leadership company”. The company does not have its own website and a LinkedIn search did not reveal any other employees. Mr Malloch said in a statement, “At its height it had approx 15 employees [full-time] and many [part-time employees].”

Laura J. Spence, professor of business ethics at Royal Holloway, University of London, said that describing oneself as chairman and CEO “could be an accurate statement”, but added it may be misleading “because it suggests a large company”.

Last year Mr Malloch set up a UK company, Roosevelt Global Fiduciary Governance, with his wife as company secretary, which suggests a small operation. “Why is there a problem with small companies?” he told the FT.

Mr Malloch’s most senior diplomatic posting was at the UN Economic Commission for Europe between 1988 and 1991. In his autobiography, he described the role as “ambassadorial-level”, a D-2 on the UN pay scale, and the “top US position in Geneva”. The UNECE told the FT that the role was not ambassadorial level, was a lower grade (D-1), and that there were higher-ranking US officials at the UN in Geneva at the time.

Ms Spence, of Royal Holloway, said the questions surrounding Mr Malloch were “a warning signal to universities” as they broadened their appointments. “There is a new challenge for universities appointing people not on the basis of their academic credentials. That’s not where our strength lies,” she said.

Saïd Business School declined to specify whether it had done due diligence before appointing Mr Malloch, stating it had received references from Yale, where he was a research professor, and that he “gave no reason for suspicion” during his time in Oxford.

Henley Business School, which currently employs Mr Malloch, said: “While we do not comment on individual members of staff, our academic staff are free to express views.” Henley came 37th in the FT’s European Business School Rankings 2016.

The FT has identified a number of potentially misleading claims made in Mr Malloch’s autobiography, Davos, Aspen & Yale, and in an online CV.

● That Margaret Thatcher called him “a genius” and a “global sherpa” live on CNN in 1992. After video evidence contradicted his claim, he said the comment was made off-camera. A friend of Mr Malloch’s has told the FT he remembers hearing Thatcher use the “global sherpa” phrase of Mr Malloch.

● That he was “made a laird” by the Lord Lyon. The Lord Lyon does not have the power to create lairds. Mr Malloch told the FT that he had a scroll showing his position as laird.

● That he completed his “entire doctoral programme in an unprecedented less than three years”. Mr Malloch now says this did not include finishing his thesis.

● That he wrote for The New York Times and the Washington Post. No record could be found of him having done so. Mr Malloch declined to provide a list of articles.

● That he is “chairman and CEO” of Global Fiduciary Governance LLC and the Roosevelt Group. Neither company has its own website or any listed employees on LinkedIn, suggesting they are less grand than Mr Malloch’s use of the titles implies.

● That he was a fellow at Wolfson and Pembroke colleges, Oxford. Both institutions deny such an affiliation. Mr Malloch rejects this.

● That he was a “professor” at Saïd Business School, Oxford. In fact he was a senior fellow on a short-term appointment. Mr Malloch told the FT he was a professor at Yale and Blackfriars Hall, Oxford.

● That he was the “first” to use the phrase thought leadership, a phrase that dates back to the 19th century. Contacted by the FT, Mr Malloch repeated the claim.

After this article was published, Mr Malloch made a series of false statements about the Financial Times and defamatory allegations against two of its journalists.

The website BrexitCentral.com published a correction and apology above an amended article that had previously contained some of Mr Malloch’s false statements.

However, on 19 February Breitbart.com then published some of the same, and other, false statements by him.

Far from rebutting the FT’s reporting, Mr Malloch has failed to justify a number of claims made in his autobiography and the online CV mentioned in our coverage.

His dissemination of false facts in his inaccurate article on Breitbart.com is unacceptable, therefore we are setting the record straight. Mr Malloch made a number of false statements about the FT and its journalists, of which some of the most serious are addressed below.

Ms Hollinger did not tell him the comment piece he had offered to the FT would not be published “because it was contrary to [FT’s] pro-EU policy”. The FT’s comment sections carry a diverse range of views, including pro-Brexit pieces by contributors such as Ruth Lea, Jacob Rees-Mogg, John Redwood and Nigel Lawson. The FT encourages op-ed submissions via its website. Ms Hollinger did not “lecture” Mr Malloch and did not say, as claimed, that “the EU is the most perfect thing ever invented”.

● FT political correspondent Henry Mance did not describe himself as a “media writer” and did not say he had been told “by higher ups” to do his reporting on Mr Malloch; the reporting was his own initiative. Mr Malloch never asked Mr Mance if the EU was paying him. Had he asked, Mr Mance would have informed him that of course it was not doing so.

● Mr Mance never offered to show Mr Malloch any text before publication. The Financial Times does not give subjects of news reports the right to review articles prior to publication.

● In his Breitbart piece, Mr Malloch’s account of his exchange of questions and answers with Mr Mance in relation to the above article and the news report of 9 February is flawed and embellished.

● Mr Mance asked him about an Emmy “nomination”, not about an Emmy “award”. Mr Malloch’s claim in his book, that Doing Virtuous Business was nominated, remains incorrect.

● In his book, Mr Malloch states Margaret Thatcher called him a “genius” and a “global sherpa”, and specifies the precise moment — on stage at a 1992 CNN conference at the start of her speech. That is contradicted by a C-Span video of the event.

● Mr Malloch’s Breitbart article confirms the FT’s reporting that he was not “knighted into the Sovereign Order of St. John by the Queen, Elizabeth II herself” as stated in his book.

● His book states he was “made a laird by Lord Lyon of Scotland” whereas a spokesperson for the Lord Lyon denied this, and the FT’s reporting reflected that discrepancy.

● FT’s reporting questioned Mr Malloch’s claim, in his book, that he “finished [his] entire doctoral program in an unprecedented less than three years”. Mr Malloch himself has conceded that he completed coursework and oral exams within three years but not his thesis. Mr Malloch never offered to put FT in contact with his thesis examiner, as claimed.

● The New York Times and Washington Post confirmed to the FT that they had no record of Mr Malloch’s having written for them. Mr Malloch declined to identify to Mr Mance any specific articles he claims to have written for those news organisations.

● In his Breitbart article Mr Malloch cited correspondence from a Dr Christopher Hancock in support of his claim to have been a fellow at Wolfson College, Oxford. However, no such correspondence was received by Mr Mance; in any event, the correspondence does not confirm Mr Malloch’s status. The college authorities have denied Mr Malloch was a fellow there.

● Mr Malloch’s article also cited an email from Mr H. Skip Weitzen and complained that the FT did not publish it. However, Mr Weitzen’s account is referenced in Mr Mance’s article of 10 February.

The FT stands by its reporting and will continue to set the record straight in the face of any further false claims.

Get alerts on Ted Malloch when a new story is published