A political scientist who wants to be Donald Trump’s ambassador to the EU appears to have embellished several details in his autobiography, including being praised by Margaret Thatcher and being “knighted” by the Queen.

Ted Malloch has offended European leaders by comparing the EU to the Soviet Union and predicting that more countries will follow Britain out of the bloc. Although he has not worked as a diplomat since 1991, he has campaigned vigorously for the Brussels job, becoming one of the most vocal Trump supporters in European media.

But the Financial Times found that several of Mr Malloch’s accolades mentioned in a new autobiography, titled Davos, Aspen & Yale, are misleading or are contradicted by available evidence.

In the book, he claims that his PBS documentary Doing Virtuous Business “was nominated for an Emmy Award”. A spokesman for the Television Academy, which awards the Emmys, said he could not find any record of the nomination.

WFYI, the production company behind the documentary, said the film had been submitted for a Lower Great Lakes Chapter Regional Emmy but not nominated. Mr Malloch was involved in a previous documentary that was nominated for a Regional Emmy.

Mr Malloch claims that Margaret Thatcher described him as a “genius” and “global sherpa” at the start of a 1992 speech. “I have used the praise and moniker ever since,” he wrote in the autobiography, which is subtitled “My Life Behind the Elite Curtain as a Global Sherpa”.

But in a video of the event, the former prime minister does not call Mr Malloch a “genius” or a “global sherpa”. Instead, Lady Thatcher made a joke at the start of the speech, apparently congratulating organisers for holding the conference in the same week as Black Wednesday, the day Britain was forced out of the pre-euro Exchange Rate Mechanism.

Mr Malloch told the FT the “global sherpa” comment was “an established fact” and that “about 2,500 people had heard” the remark.

Mr Malloch also writes that he was “knighted in the Sovereign Order of St John by the Queen, Elizabeth II herself” and “to my family and closest friends, I am therefore known as Sir Ted”.

Mr Malloch also says that he was ‘knighted in the Sovereign Order of St John by the Queen, Elizabeth II herself’ and ‘to my family and closest friends, I am therefore known as Sir Ted’

But while he received the medal of St John in 2005, it was as a “serving brother” — a grade roughly equivalent to an MBE, a British honour several ranks lower than a knighthood. It does not carry a right to a title and members do not attend an investiture with the Queen.

Questioned by the FT, Mr Malloch said: “Of course it’s not [a knighthood]. I never suggested it was.”

Mr Malloch also wrote that he was “made a laird by Lord Lyon of Scotland and given a personal coat of arms with a fancy Latin inscription”.

However, the Clerk and Keeper of the Records at the court of the Lord Lyon said: “The Lord Lyon does not, nor could he, create a person a laird . . . It would certainly be incorrect [for Mr Malloch] to say that ‘he was made a laird by the Lord Lyon King of Arms’.” Mr Malloch told the FT that he had a scroll showing his position as laird.

Currently a professor at Henley Business School, the management writer has been given prime billing in British media, including BBC shows such as Radio 4’s Today and The World at One, and BBC2’s Newsnight and the Daily Politics. He has also been quoted in other European media, recently telling Greek television that the country would be better off outside the eurozone.

Although he is frequently cited as Mr Trump’s likely choice as EU envoy, the White House has yet to nominate Mr Malloch for any role. Earlier, the BBC suggested he could become US ambassador to Britain, a nomination eventually given to businessman Woody Johnson. Ambassadorial nominees require US Senate confirmation. 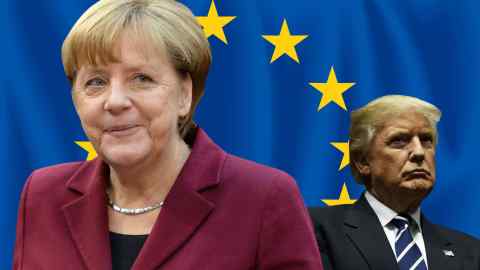 Until last year, Mr Malloch was a fellow at the Saïd Business School at Oxford university. He told the FT that he was still “very much” under consideration, and had been interviewed in Trump Tower and vetted.

European officials have privately raised concerns with their US counterparts about Mr Malloch’s possible role, according to diplomats familiar with the conversations. While the Trump administration reassured some of them by insisting that a range of candidates was still under consideration, US officials did not deny Mr Malloch was a potential candidate.

Davos, Aspen & Yale tells the story of the Philadelphia-born Mr Malloch’s education at the universities of Aberdeen and Toronto, followed by stints at Yale, the Department of State, the UN in Geneva, Salomon Brothers and the World Economic Forum.

In the book, Mr Malloch writes that he completed his “entire doctoral program in an unprecedented less than three years”, between 1976 and 1979.

The University of Toronto says that his PhD was not awarded until 1980. After being questioned by the FT, Mr Malloch said that he had completed his coursework and oral exams within three years, and that his thesis took longer.

Mr Malloch recently claimed that he “helped bring down the Soviet Union”. After a period in the state department, his most senior diplomatic role was as deputy to the executive secretary in the UN Economic Commission for Europe, between 1989 and 1991. He said that role was “ambassadorial-level”, but UN and US officials said the post is not regarded as equivalent.

Mr Malloch told the FT: “The role was always described to me as such.”

Get alerts on Ted Malloch when a new story is published