Europe’s largest banks are planning to slash business travel permanently by as much as half from pre-pandemic levels after the coronavirus crisis recedes, as many of the new ways of remote working developed during lockdown become the norm.

Senior bankers are keen to learn from the lessons of the past year to cut costs and bolster their green credentials, but the plans will be worrying for airlines and hospitality groups that rely heavily on business travel for profits and are hoping for a swift recovery once restrictions are lifted.

Noel Quinn, chief executive of HSBC, told the Financial Times he expected to reduce his own travel by about half post-Covid, taking fewer, longer trips to the lender’s global hubs to lower the number of flights required.

Britain’s Lloyds Banking Group and Dutch bank ABN Amro, meanwhile, have become two of the first big lenders to set formal bank-wide emissions targets. Lloyds pledged to “sustain the momentum” built during the pandemic by keeping carbon-dioxide emissions from travel to less than 50 per cent of 2019 levels.

Flying out for a one-hour meeting and coming back, for instance. These things will disappear.

ABN is aiming to halve its air travel compared with 2017 over the next five years, in part by banning bankers from taking flights between its European offices and forcing them to take the train.

For airlines and hospitality groups, it could prove a savage blow. Business class is one of the most lucrative sources of income for some airlines, while international hotels and other hospitality groups, such as restaurants and bars, can make up a lot of their earnings from executive functions and events for business people.

Corporate travel can generate up to 75 per cent of airlines’ revenues on some international flights, according to PwC.

It also undermines predictions from some industry bosses, such as Ryanair’s chief executive Michael O’Leary, who last week forecast business travel would make a full recovery from the crisis.

For domestic banks, such as Lloyds, cutting back on travel may be relatively easier, although it will still require a reduction in face-to-face meetings with business customers and foreign investors. However, even internationally focused investment banks are planning substantial cuts.

A senior executive at another bank with operations across several countries said his bank had yet to settle on a final target, but it was also considering limiting travel “to half of pre-pandemic practice”. 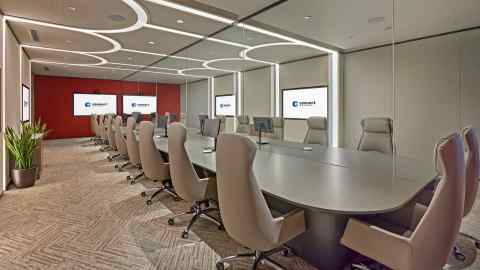 Andy Halford, chief financial officer of Standard Chartered, which has its headquarters in London although it carries out most of its business in emerging markets, was more cautious than some peers, but still expected bankers’ movements to be about a third lower than before the pandemic.

“Meetings with investors to do updates, roadshows around the world, I expect those things will reduce. Many investors can get just as much out of it on video. But town halls with a lot of staff, important executive meetings . . . that will need to continue. The morale impact is worth the effort,” he said.

A decline of one-third would be in line with recent predictions by Star Alliance chief executive Jeffrey Goh, but other airline executives have been hoping for a less severe fall. Shai Weiss, Virgin Atlantic chief executive, told the Financial Times this month that the company was planning for a long-term hit of as much as 20 per cent, while O’Leary was even more upbeat.

Several senior bankers said they were keen to resume some types of travel such as visiting staff and key clients, but realised 2020 had proven many trips taken in the past were superfluous.

“I think people don’t see the point of doing everything they were doing before,” said one senior investment banker. “Flying out for a one-hour meeting and coming back, for instance. These things will disappear.”

Maintaining some of the remote-working habits developed during the pandemic also provides an easy opportunity for banks to cut costs at a time when many are struggling to make sustainable returns in an era of low interest rates. HSBC alone saved $300m on travel costs in 2020 compared with the previous year.

The slowdown also reduced the bank’s annual CO2 emissions by about 73,000 tonnes. Although banks’ biggest contribution to climate change comes through their lending to heavily polluting industries, travel-related emissions are a material portion of their direct carbon footprint.

A 50 per cent drop in travel across the UK’s four largest banks compared with 2019 would save close to 120,000 tonnes of CO2 emissions each year, according to FT calculations.