France could turn the populist tide

Something has happened in Paris. Shafts of sunlight are visible through the clouds. The familiar blanket of morosité has been penetrated, if not by anything as un-French as exuberance, then at least by moments of cheer. Britain seems set on leaving its own continent. A new president in Washington is leading the US into belligerent isolationism. Every political story, it seems, has a bad ending. What if France defies the narrative?

The Brexit vote has dented badly the coherence of Europe. Donald Trump’s arrival in the White House has put in question the future of what we used to call the west. In its way, the coming French presidential election is just as consequential. A victory for Marine Le Pen, the leader of the far right and Islamophobic National Front, would read the rites over European liberal democracy. The EU can survive Britain’s departure. Not so that of France.

In an age defined by populist insurrections, it would be foolhardy to predict the outcome of the poll. France has been in the grip of economic stasis for the best part of a decade. It has been the victim of the cruellest attacks by Islamist terrorists. President François Hollande’s ratings have dropped to single figures. After Brexit and Mr Trump, it is no great feat of imagination to visualise the tumbrils piled high again with the corpses of the French political class.

Philip Stephens
What the world hears from Donald Trump 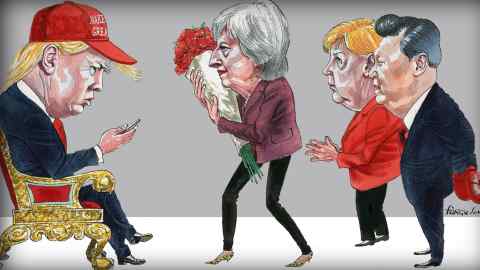 Maybe. But Paris does not feel like that. Business leaders who for years have been grumbling of France’s economic sclerosis suddenly sound upbeat. Young tech entrepreneurs who may otherwise be heading for London or New York are raising funds at home. Paris’s digital hubs are, well, humming. Polls suggest the electorate’s devotion to an ever bigger state has waned.

Ms Le Pen’s base of support among the “left behind”, the elderly and the xenophobic should not be underestimated. On present trends, she is assured of a place in the second, run-off round of the election. And yet. The terrorist attacks have not seen the decisive lurch into Islamophobia that the National Front had hoped for. Mr Trump’s ugly nationalism has been a powerful reminder that France’s interests lie in a cohesive Europe. Ms Le Pen’s pledge to restore the franc in place of the euro has failed to gain traction. Maybe, just maybe, France will turn out to be the place where the populist tide is turned.

Prudently, Mr Hollande chose not to seek a second term. In his absence, his Socialist party has opted for Benoît Hamon, a standard bearer of the left. Mr Hamon bears more than a passing resemblance to Jeremy Corbyn, the leader of Britain’s Labour party. The two men prefer to head protest groups than to widen their appeal to voters. Mr Hamon will lose badly in the first round of the presidential poll. But then, as for Mr Corbyn, preserving the ideological purity of the left seems a more important task than governing.

The energy of the campaign has thus far come from Emmanuel Macron, the investment banker turned politician running at the head of a new centrist movement. The 39-year-old served as Mr Hollande’s economy minister before resigning to create En Marche! Mr Macron is a product of the elite, an alumnus of the prestigious École nationale d’administration. But, taking his cue from the populists, he has cast himself as the outsider.

En Marche! presents itself as a movement rather than a party. Candidates for elections to the National Assembly will be chosen through an open, online selection process. Thousands have turned up at rallies to hear Mr Macron’s pitch for economic modernisation at home and French leadership in Europe. There is a touch of the young Tony Blair about the campaign. 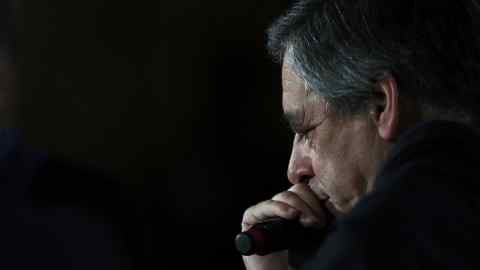 His willingness to take risks — his candidacy was initially written off by most commentators — has been rewarded with good luck. Mr Hamon will probably drive many moderate socialists into the arms of En Marche! And Mr Macron has been similarly blessed by the recent troubles of François Fillon, the candidate of the centre-right Republicans.

Until a week or so ago, the former prime minister Mr Fillon was the firm favourite to win the Elysee. A staunch Catholic, Gaullist and advocate of radical economic reform, he was running well ahead of Mr Macron. But this is France. Mr Fillon has been laid low by allegations that he used public funds to pay his wife and children for fictitious jobs. He denies the charges, but the sight of police officers raiding his offices in the French parliament has done nothing for the standing of a candidate who had claimed the ethical high ground.

The polls say Mr Fillon is running neck-and-neck with Mr Macron in a contest to face Ms Le Pen in the second round. The scandal could prove fatal for his candidacy. Alain Juppé, the runner-up in the Republican primaries, is waiting in the wings.

What may matter more than the names on the ballot paper, though, are the signs that a critical mass of voters has decided that France needs reform — that the privileges of the middle-aged and elderly cannot indefinitely be defended against the interests of the young unemployed. Ms Le Pen cannot claim to be alone in seeking change.

Betting against the economic nationalism and identity politics peddled by populists has proved an expensive pastime during the past year. But there is no immutable law that says that anger is henceforth the ruling emotion in politics. France may surprise us — and itself.