Moscow is building influence on the continent, to the chagrin of former colonial powers

As protests raged in Zimbabwe’s cities last week, with police firing live ammunition at crowds who barricaded roads with burning tyres, the target of their anger was 8,000km away.

President Emmerson Mnangagwa, who had sparked the unrest by raising fuel prices amid an economic crisis in the southern African country, was instead strolling through the Kremlin for talks with President Vladimir Putin, the first of what Moscow hopes will be many visits by African leaders this year.

Amid deteriorating relations with western countries, a diplomatic campaign to win new friends and partners in Africa is at the forefront of a sweeping foreign policy pivot by Moscow, as it seeks fresh alliances to bolster its global geopolitical clout.

From Algeria to Uganda, Russia is building influence in Africa, lending support to embattled strongmen, taking on natural resource projects in conflict-racked states and positioning itself as a new powerbroker without the baggage of former colonial powers.

While lacking the financial firepower of China or the longstanding trade relations of former colonial powers, Russia has sought to use its military exports, security apparatus and state-controlled natural resource companies to gain footholds across the continent.

These diplomatic outreaches to old Soviet allies or countries previously overlooked by Moscow are aimed at both increasing its sway and unsettling rivals such as the US, Britain and France in a region where they have long held influence.

Christian Malanga, an opposition politician in the Democratic Republic of Congo where Moscow has hailed Felix Tshisekedi as the winner of the recent presidential election despite evidence of voting fraud, says Russia was building on old Soviet ties. “It’s the cold war 2.0,” he says, adding that Russia complemented China in what he saw as a strategy to challenge western influence. “China is the money and Russia is the muscle.”

The need for new alliances has become acute since 2014, when western sanctions were imposed against Moscow after its annexation of Crimea.

“Russia has been re-evaluating its diplomatic policy since the western sanctions came into effect,” says Olga Kulkova, senior fellow at the Africa Institute of Russia’s Academy of Sciences. “Moscow realised it needs new partners.

“Russia has managed to jump into the last carriage, all our partners are already there. But it can compete well by offering both unique and cheaper services to African nations,” she adds.

“The predatory practices pursued by China and Russia stunt economic growth in Africa, threaten the financial independence of African nations . . . and pose a significant threat to US national security interests,” he said.

It was the brutal murder of three Russian investigative journalists in the Central African Republic last July that thrust Moscow’s African endeavours into the spotlight. Shot dead in an attack on their jeep while driving through the countryside, the reporters were investigating the activities of Wagner, a Russian paramilitary company, in a country where Moscow has expanded its presence rapidly over recent years.

Their murders, which local officials blamed on a robbery but subsequent Russian investigative reports suggest may have been orchestrated, focused international attention on the role of Russian security assets — both state and private — in the Kremlin’s outreach to African countries.

“Western analysts, myself included, only really woke up to this at the sudden appearance of significant clusters of Russian armed men,” says Alex Vines, head of the Africa programme at the Chatham House think-tank in London. “It was like: ‘My God, what have we missed and why have we missed this?’”

Moscow has sent planeloads of arms to the country, alongside five armed forces personnel and more than 200 private military contractors to train hundreds of elite troops.

Valery Zakharov, a former Russian intelligence official, is the national security adviser to CAR president Faustin-Archange Touadéra, and Russia is setting up a team inside CAR’s defence ministry.

This month, during a visit to Russia, CAR’s defence minister told state media that there was a “possibility” of Moscow opening a full military base in the country.

Such actions have unnerved France, CAR’s former colonial ruler and traditionally its most prominent foreign ally. Roland Marchal, a Russia-Africa expert at Sciences Po, says Moscow’s approach of supporting African leaders through government-backed defence and industrial deals is straight out of the “Françafrique” playbook of the 1970s and 1980s, when the state and commercial interests of Paris were intertwined.

“It’s pure Françafrique. Change the flag and you have the same methodology,” he adds.

A senior European diplomat in Moscow says: “We don’t know exactly what they are doing in the Central African Republic, but we don’t like it too much. We are not sure that the [CAR] government is completely controlling everything.”

While the Central African Republic has dominated the headlines, Russia’s activity is increasing across the continent. In 2017, Russia’s trade with Africa rose 26 per cent to $17.4bn.

Russia sold twice as much weaponry to African countries in 2017 as it did in 2012, according to the Stockholm International Peace Research Institute. Between 2013 and 2017, Russia supplied 39 per cent of Africa’s imported arms — compared with 17 per cent from China and 11 per cent from the US.

In 2014, Zimbabwe concluded an arms-for-platinum deal with Russia worth a reported $3bn, bypassing both a European arms embargo and its lack of hard currency to swap rights to the Darwendale platinum concession for the provision of an undisclosed number of MiG-35 fighter jets.

Rosatom, the state-run nuclear monopoly, is working in Zambia and Rwanda. Russian geologists are active in Madagascar, Algeria, Libya and Ghana. Rosneft, Russia’s largest oil company, is developing oil and gasfields in Egypt, Mozambique and Algeria, and rival Lukoil has projects in Nigeria, Ghana and Cameroon.

“Moscow and Beijing are clearly competitors over natural resources, but the Russians will not beat China in Africa,” says Mr Vines. “It is minor league in comparison.

“But with the US retreat, there is space for Moscow to be mischievous. It is about optics and, to a certain extent, smoke and mirrors to present itself as a global power,” he adds. “The Russians are looking for areas where they can unnerve western opponents . . . some of whom are truly shocked at what is happening.”

Take South Africa. Last October, former finance minister Nhlanhla Nene told an inquiry into so-called “state capture” that he had been sacked in 2015 because of his refusal to sign guarantees for a R1tn ($70bn) nuclear deal with Rosatom. His replacement with someone considered more pliable triggered such a sharp fall in the rand that the incident came to be known as “Nenegate”.

Mr Nene said the deal would have been ruinous for South Africa, but would have benefited some of former president Jacob Zuma’s associates, including the Gupta family at the centre of allegations of state capture. The Guptas owned a uranium deposit, though both they and Mr Zuma have denied any wrongdoing.

In 2015, Mr Zuma flew to Russia for emergency medical treatment, and it was during his recovery that he is reported to have struck the nuclear deal with Mr Putin.

“Russia had never had a very strong presence in South Africa until Zuma got into power,” says Lumkile Mondi, a senior lecturer at the University of Witwatersrand. “Through him they were trying to get in and gain control, given that historically the Anglo-American countries have been our partners. Then the Brics countries came in and Russia wanted a piece of the pie.”

While Moscow is keen to build new relationships, it is no stranger to the region. During the cold war, the Soviet Union had strong ties with various African states, supporting independence movements aimed at dislodging western colonial powers.

João Lourenço, Angola’s president, studied at the elite Lenin Political-Military Academy in the late 1970s, and it was the Soviet Union’s 1956 support for Egypt in the Suez Canal crisis that helped to force the UK, France and Israel to abandon their military action.

Moscow has made this legacy a central pillar in its African outreach, contrasting its history of engagement with that of former colonial powers.

“Russian-African relations have a rich history, while, unlike the former global powers, Russia has not tainted itself with the crimes of slavery and colonialism,” the Russian foreign ministry says in a statement. “In the middle of the last century, our country actively contributed to the achievement of national independence and sovereignty of African countries . . . Many African leaders are well aware of this.”

Alongside this, Moscow is also willing to sidestep issues such as demands for reform or human rights protection — a tactic that it has effectively deployed in recent years to build strong ties in the Middle East.

“In Africa they present themselves as mediators, as honest brokers,” says the senior western diplomat. “You see a common thread across Angola, DRC, Mozambique. It’s obvious — they are repeating their successful Middle East strategy and seeking to mine the Soviet legacy.”

Sergei Lavrov, foreign minister, said last week that Russia did not agree with outside countries calling for an investigation into the presidential election in Congo, which data published by the FT show was fraudulent.

“We do not interfere with elections,” Mr Lavrov said. “The Congolese people can handle this on their own and it is important not to impose this or that agreement as is normally done by France, the US and other former colonial powers.”

Leaders such as Joseph Kabila, who is set to step down as president of Congo, see Russia as a way around the west’s tough requirements on transparency and governance, says Mr Malanga, the opposition Congolese politician. “All the actors like him are turning back to Russia. We’ve seen that in Venezuela and with Assad in Syria and that’s basically what African leaders are looking for today.”

This month, Russia’s ambassador to Guinea — a country that had close relations with the Soviet Union — suggested that President Alpha Condé could change the constitution to stay in power for a third term.

News in-depthThe Big Read
The scramble for business in Africa 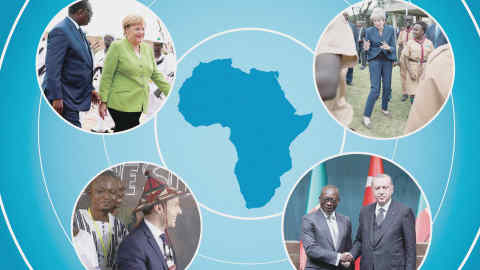 “Constitutions are no dogma, Bible or Koran,” said ambassador Alexander Bregadze. “Guinea needs you today. And as the popular Russian saying goes, you don’t change horses at a river crossing.”

Moscow hopes that Mr Mnangagwa’s three-day visit will not be his only trip to Russia in 2019. The Kremlin is hard at work arranging its first Russia-Africa summit this year. As the most prominent example of its outreach to the continent, it is aware that its success will be judged by the number of heads of state that make the trip north.

“Zimbabwe is under the yoke of sanctions imposed by western countries,” Mr Mnangagwa told Mr Putin in the Kremlin. “However, through these days of isolation, you, Russia, have remained with us as a reliable partner.”