Campaigning on far-right territory in France’s struggling industrial north, Emmanuel Macron offered residents little hope of a quick remedy and no scapegoats for their woes — only the vow to fix the broken economy.

“Let’s not lie to ourselves,” the 39-year-old presidential candidate told a crowd in Henin-Beaumont, a town run by the National Front, as he called for more than a decade of patient investment in education, technology and renewable energy. “The FN is lying to you. It has no plan.”

In a country targeted by Islamist extremists and where FN leader Marine Le Pen is predicted to qualify for the second round of the presidential elections on an identity and security platform, Mr Macron has confounded political analysts by focusing on the economy and a promise to revive France’s social mobility.

In the process he has electrified the French presidential campaign. Surveys indicate that Mr Macron, a former economy minister running as an independent, has emerged as the third man in the contest behind Ms Le Pen and centre-right candidate François Fillon — and can even hope to qualify for May’s run-off between the two leading first-round candidates.

François Hollande, the Socialist president, has ruled out re-election amid abysmal approval ratings, leaving Manuel Valls, the pro-business former prime minister, as the party’s frontrunner. But if he loses this month’s primaries to a leftwing hardliner, Mr Macron could hope to pick up centre-left votes. 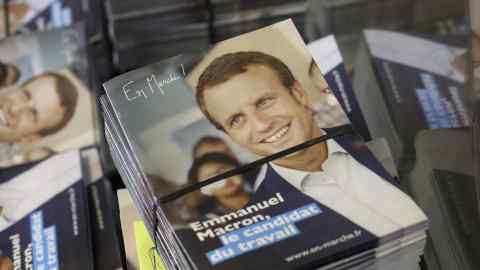 “The economy, jobs, unemployment remain top priorities for French voters,” said Adelaide Zulfikarapasic, head of BVA’s political surveys. “It’s on the economy that Hollande has failed, the reason why he was so unpopular and why he was forced on the side. Macron will probably have to address terrorism and security, but for now, embodying a new political alternative seems to make up for this potential weakness.”

The polls have echoed growing popular support on the ground, unsettling the traditional parties on the right and left. Mr Macron was unknown to the public until three years ago, when he was appointed minister in the Socialist government. But in December, more than 12,000 people attended his public meeting in Paris, a turnout hailed as a show of strength for a rookie politician. Enthusiasm seems to have extended to the provinces, where thousands have queued to hear him.

Video: Why Macron is on the rise in France

“There’s a Macron sensation, it’s not just a flash in a pan,” Laurent Bouvet, professor at Versailles university, said. “Some voters are attracted to his youth and his position as a political outsider. But others are also just curious about the sensation. Since ‘novelty’ has never really been tested in the history of French presidential campaigns, it is hard to say how it will pan out.”

Since creating his own party, En Marche!, in April and stepping down from the government in August, Mr Macron — who has never been elected — has defied the predictions of political analysts and veterans, who pointed to his lack of experience and party machine.

They also noted the difficulty that centrist candidates have had in trying to overcome the left-right divide in France for the past 60 years.

A graduate of elite school Ena and a former Rothschild banker, Mr Macron became popular after taking regular swipes at tenets of the left, such as the 35-hour working week and the wealth tax.

In Brussels and abroad, his deregulating measures passed in 2015 became a symbol of France’s newfound willingness to reform.

Mr Macron has touched a nerve by blaming some of France’s economic malaise on a cast of “insiders” who enjoy labour protection and regulatory privileges at the expenses of “outsiders” — the young, those on temporary work contracts and the residents of the deprived banlieues in the outskirts of large cities. 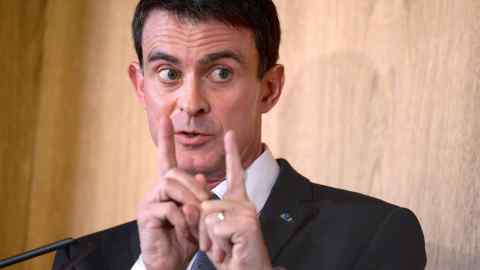 Even high-ranking Socialist party members have rallied to Mr Macron.

Gérard Collomb, the mayor of Lyon, is an early supporter, while environment minister Ségolène Royal, Mr Hollande’s former partner, has sung his praises.

Mr Macron cited the names of defence minister Jean-Yves Le Drian, an official supporter of Mr Valls in this month’s Socialist primary, and agriculture minister Stéphane Le Foll, a Hollande loyalist, during a rally in Brittany.

Whether that is a good thing for Mr Macron’s position as France’s disruptive political force is too early to say, according to Mr Bouvet. Faced with Ms Le Pen and Mr Fillon, Mr Macron may struggle to appear credible on the issues of security, identity and immigration.

“The campaign has not really started, polls are meaningless,” Prof Bouvet said. “And when it starts, in a month or two, people will ask themselves: who is best placed to negotiate with Vladimir Putin and Donald Trump?”