Get the newsletter now
Applying to Business School

Overseas applications soar as students seek alternatives to US and UK

If students at Berlin-based ESMT want a glimpse of recent history rather than a lesson in the latest business case study, they need only look up. Looming over them in the main lecture hall wall is a tiled mosaic, featuring the German Democratic Republic’s hammer and compass emblem. The business school is housed in what was East Germany’s state council building before the republic dissolved in 1990.

Today ESMT, Germany’s most international business school, is in high demand, with growing numbers of foreign MBA candidates applying. But its early years were tough: it had to convince compatriots wedded to a state-funded higher education system of the value of business education.

The school was viewed with suspicion by the German academic establishment when it was founded as a privately owned non-profit higher education institution 15 years ago, says Jörg Rocholl, its president.

“It was a completely different model to their own [universities], and there was some anxiety and uncertainty about what the school really stood for,” he recalls. Charging students for degrees was regarded as questionable by Germany’s publicly funded universities.

The future, however, looks brighter. Applications for the full-time MBA programme rose 46 per cent last year, something Mr Rocholl attributes to Germany’s global reputation as an economic powerhouse, Berlin’s status as a start-up hotspot and changing domestic attitudes to the MBA. The UK vote to leave the EU and Donald Trump’s election in the US offer opportunities to lure international students.

Germany underperforms in business education. ESMT and Mannheim Business School are the only two German institutions in the top 100 MBA courses compiled by the Financial Times, compared with 13 from the UK and four in France. Spain, Singapore and Australia have more schools in the ranking than Germany.

Many blame the structure of German higher education, historically focused on the diplom, which not only took longer to complete than undergraduate degrees in other countries but also was counted as equivalent to a postgraduate qualification, like the MBA, by many German employers. An expensive business education offered few advantages for those seeking promotion.

Ulrike Helbig is in a minority as a German-born ESMT alumni. She was a surgeon for 11 years in Berlin before moving into an executive role at the German Cancer Society after her MBA.

Following the financial crisis in 2008, Dr Helbig decided an MBA would help her better react to economic uncertainty. She chose ESMT over Switzerland’s IMD business school, whose MBAs the Financial Times ranked at 70 and 21 respectively in 2017.

German employers must improve their understanding and appreciation of the value of an MBA, and how it helps students react to shifts in business, according to Dr Helbig.

“We were really strong in Germany with our industrialisation technology, but we live in changing times,” she says.

But the conflict between qualifications has largely been resolved thanks to the Bologna process, a series of agreements named after the city where the first was signed in 1999, to harmonise higher education across Europe.

German schools’ confidence about their ability to seize a share of the global MBA market has been boosted by political events in the US and the UK, two countries that dominate the ranking. Both the Brexit vote and Mr Trump’s arrival in the White House risk making the UK and US less attractive to international students because both events portend tighter immigration controls.

ESMT and Mannheim formed an MBA “alliance” in December with three other German business schools, taking out newspaper adverts to highlight their achievements and emphasise their openness to overseas students.

The alliance schools set themselves apart from the other 500 rival institutions in German-speaking countries, by pointing out that their programmes are taught in English.

Brexit was not the driving force for the alliance, Mr Rocholl insists. Rather, it was the realisation that the MBA market in Germany is robust and growing.

However, overseas students are essential to ESMT, where just 5 per cent of the current MBA class is German born. Mr Rocholl acknowledges that Brexit “has an impact” for students considering options in different countries.

One of those is Hillary Batchelder, an American with a bachelors degree in English from Williams College, Massachusetts, who chose ESMT for her MBA over higher ranked European institutions on her early list, which included LBS in the UK and Insead in France.

The UK voted to leave the EU after Ms Batchelder had been accepted at ESMT, but visa restrictions on overseas students had already dissuaded her from choosing a British school.

“I had friends who went to UK programmes and had trouble obtaining work visas,” she says. “Last June’s vote would have made me even more wary of attending a programme there.”

Student immigration controls had been tightened in the UK before the EU vote, including the scrapping of the post-study work visa in 2012. Today anyone coming to study from outside the EU, Switzerland, Iceland, Liechtenstein and Norway must have a Tier 4 visa, costing £335.

Germany insists on everyone having residence cards, which cost €110. But it offers visa-free entry not only to students arriving from European nations on the UK list but also those from the US, Canada, Australia, New Zealand, Israel, South Korea and Japan.

Tuition costs are another advantage to German business education. The €43,500 fee for ESMT Berlin’s one-year MBA programme is high for a typical applicant from Germany, where university education remains free. But it is low compared with London Business School’s £75,100 (€88,300) charge.

Walking around the ESMT campus, it is impossible to pick out a German accent amid the foreign tongues. The main lecture hall is filled with Chinese executives. 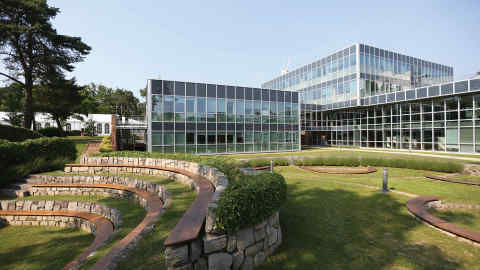 In the canteen is Elisabeth Wilkie, an MBA student who grew up in California. She says her friends at home were surprised when she chose a German school, but says her choice made sense after she completed an undergraduate degree in Switzerland.

“I found Berlin to be a very easy place to be an Auslander,” Ms Wilkie says, noting that the prevalence of English speakers around the city means she can get by without speaking German.

Others in the MBA alliance would like to make it easier to support students such as Ms Wilkie. Andreas Pinkwart, dean of HHL Leipzig Graduate School of Management, says the group see themselves engaged in “friendly competition”, with the shared goal of increasing the overall intake of overseas students for all German business schools.

HHL has doubled its number of MBA students in five years, a reflection of an increase in the quality and quantity of applications the school receives, according to Mr Pinkwart.

The success of German business schools in teaching entrepreneurship is one reason for the rise in applications, Mr Pinkwart says. Trivago, the Nasdaq-listed online hotel booking service, was co-founded by three HHL alumni, and entrepreneurship is taught as part of the MBA, he notes.

Fintech
Fintech lures MBAs away from banking and consulting 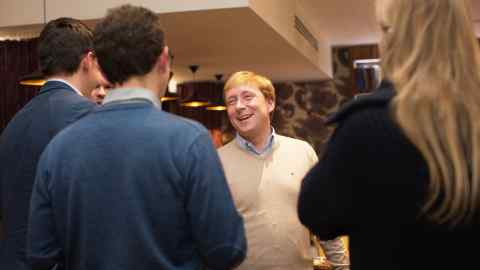 But one of the greatest challenges, according to ESMT’s Mr Rocholl, will be improving the positions of German business schools in global rankings, which he claims favour the strengths of UK schools that appeal to students interested in high-paying financial services jobs.

The FT MBA ranking is a weighted index in which a key measure is the salary increase achieved three years after graduation.

“In terms of quality of education, faculty, facilities, and services, the top German schools are by now on par with top UK schools,” he says.

“The fact that Germany attracts fewer students looking to enter high-paying sectors like investment banking means that it will be difficult to outrank UK schools.”