How much do couples know about their partner’s finances? It’s a question I have been asking after reading Me, My Money and I, a study by the challenger wealth manager Netwealth exploring “the growing financial autonomy of UK women”.

This found that younger women were much less likely to share a joint account with their partner than older generations.

Just 27 per cent of women aged 16-34 in a relationship did so — yet this figure was nearly 50 per cent for women aged 55 and over. Older women were also more likely to share savings and investments with their other halves.

Of course, how much you share rather depends on what stage your relationship has reached. On a first date, nobody expects to be quizzed about their salary or property owning status — although it definitely happens. But by the time couples are living together, there will be joint expenses to manage and money conversations will need to be had. And could younger women’s apparent aversion to joint accounts be explained by the fact they probably haven’t had children yet?

Nevertheless, “financial independence” was a key reason women gave for keeping things separate (hard to argue with that). However, the survey also highlighted a worrying lack of financial openness between couples. Only 57 per cent of respondents were prepared to say they had a “complete and accurate understanding” of their partner’s finances. What could this lack of financial openness be costing women?

“I couldn’t tell you what my husband actually earns,” one colleague confessed. She had a rough idea, and wasn’t exactly short of a bob or two. But she knew little in the way of details.

Following an appeal on social media, it turned out that friends and followers were happy to (anonymously) share details of how they managed money with their partners because they were intrigued to find out how other couples did it. I have set out the most common themes below, and some of the potential limitations. As one friend put it: “We never sat down and planned this arrangement — it’s just evolved over the years.”

Both parties have their salaries paid into their own current accounts, but pay a set monthly amount into a third joint account from which bills and shared expenses are taken. This was the most common method among younger friends; many had used similar arrangements when sharing a flat. Although the third account was a joint one, one person tended to manage the bills and associated admin (more often than not, the woman). There could also be a fourth account, for saving towards a set goal such as a holiday fund or property deposit.

A third account with one crucial difference — how much each party pays in. As one friend put it: “Me and my wife earn different amounts, and the amount we pay into the joint account reflects that. We both know how much each other earns, but we are a team — so all our money is all our money.”

Money Clinic with Claer Barrett podcast24 min listen
Do you have a joint bank account with your partner?

Couples using this method tended to have children. Some were horrified to learn that other friends were still going 50:50 after starting a family: “One friend saved like mad while she was pregnant so she could afford to pay her half of the bills while she was on maternity leave. I always thought this was terrible — plus her partner earned more than she did.”

Another said it could explain the “gender pensions gap”: “So many mums I know work part-time or have their earnings power compromised by motherhood, yet are expected to contribute half of everything into the joint account. The Mum Tax is real! They are saving nothing, unlike their male partners.”

Both salaries are paid into the same joint account, from which all expenses are paid and no expenditure can be hidden. Several friends said this was what their parents did. It was most common where one partner had taken a career break to raise a family. One told me: “You start off with a joint account and it’s just for rent and bills. By the time you have children, basically your whole life goes through it — childcare, children’s clothes and toys, school fees . . . the only money I spend on myself is when I buy my own clothes.”

Another said: “When we both worked, all of our money went into the same pot, and we haven’t changed the situation even though my husband is the only earner. His view is that I work just as hard raising three children, and that we are equal partners no matter what we spend. He also knows I’m not going to blow it all on clothes and shoes!”

Several friends said the financial shock of maternity pay had prompted the change: “I am currently on statutory pay (terrible) so we have just started talking about moving to a joint account after all these years.”

As the sole earner, I put money in our joint account and my husband’s personal account because he was feeling uncomfortable taking personal expenses from the joint one. Money is so tied up in power

Another said: “Our joint account is an overhang from when I went on maternity leave. I had issues with relying on my husband for ‘spending money’ so we went for the joint account and have kept it that way.”

An older friend points out that being financially open can help couples meet retirement savings goals: “Now me and my wife are retired, we’ve kept to the same system. We have always known what each other earned, and what our respective pensions are. We’ve never had any financial secrets. You never have any arguments about money that way!”

All income is paid into the joint account, but each partner has a second account (often an app-based bank) into which “pocket money” is paid for personal spending such as clothes, coffee, and nights out. “We never argue about money with this system, works like a dream,” reports one friend with two young children. But it doesn’t suit everyone.

Another friend said her ex-husband expected all income to be paid into the joint account, with each partner receiving a small personal allowance. “At the time, I wasn’t working, but when I went back it felt important for me to have my wages paid into my own account, and then I’d transfer some across to the joint account.”

Stay-at-home dads also find the lack of financial independence difficult: “As the sole earner, I put money in our joint account and my husband’s personal account because he was feeling uncomfortable taking personal expenses from the joint one. Money is so tied up in power.”

I do this, you do that

The couple have separate accounts, but each person takes responsibility for different payments. As one friend puts it: “He pays the bills, I pay for all the kids’ stuff.” This method seemed a bit harder to manage than the ratio method. One higher-earning woman said she paid for all the holidays and childcare but split the mortgage with her husband: “I also have a separate savings account as my husband has become a little spoilt.”

Another friend was keen to keep things separate. “Having had a joint current account with my ex-husband, I said never again. I would think I knew how much money we had, and then he would take hundreds out in cash and I couldn’t understand where it went.”

One person has sole responsibility for managing the money. The other contributes a certain amount towards joint expenses, and the couple typically have separate accounts. A friend reports: “I manage all the family finances, but my mother-in-law likes to tell me that my husband managed just fine before I came along. God knows how, as he happily has nothing to do with the money now!”

Family MoneyLucy Warwick-Ching
What financial secrets is your partner keeping from you? 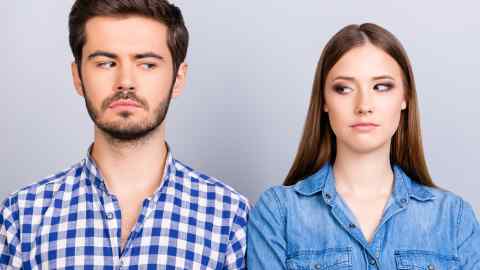 Readers probably won’t be surprised to learn that this is how we run things in my household, although the “ratio method” is applied to our contributions (as well as our joint credit card bill). Managing money is something I enjoy but my partner dislikes. However, this doesn’t mean that we don’t talk about money — it’s vital we are both involved in financial decisions about our future even if he trusts me to deal with the day-to-day operations.

Whatever combination of methods couples might use, the key to success is communication — are they both happy with the arrangements and do they feel able to speak out if they’re not?

Managing money jointly might start with spending needs (covering the rent and bills) but savings needs become more important as your partnership lengthens — particularly when children arrive. Having these sorts of conversations might not sound romantic, but I truly believe that couples who can talk openly about their finances will stand a much greater chance of future happiness together.

FT Money would love to hear readers’ top tips about managing money with a partner. You can comment below, or if you would prefer to share your experiences in confidence, email money@ft.com