Ask people to name Pfizer’s best-selling product and many would opt for one of its most famous drugs: Viagra, for erectile dysfunction, or Lipitor, to reduce high cholesterol. People more familiar with the US pharma group might suggest a more recent blockbuster such as Lyrica, for pain.

But they would all be wrong. The top-seller is not a drug but a vaccine: Prevnar, which prevents pneumonia, meningitis and other infections caused by pneumococcus bacteria.

Prevnar generated revenues of $6.25bn last year — almost three times as much as Viagra. This was up 40 per cent from the year before, after the expert panel that advises on US vaccine policy recommended its use in over-65s as well as in children.

While vaccines play a big role in frontline healthcare, they are often an afterthought for a pharmaceuticals industry more focused on treating diseases than preventing them. But the success of Prevnar shows they can be as lucrative as any drug.

Pfizer is one of just four pharma groups with large vaccines operations. The others are GlaxoSmithKline of the UK, Sanofi of France and Merck of the US. All four reported stronger sales growth in vaccines than in pharmaceuticals last year and operating margins were comparable with pharma at around 25-30 per cent.

There are several factors driving this growth. One is the expansion of immunisation programmes in newly industrialised countries such as China. Sanofi’s sales for polio and whooping cough vaccines in emerging markets grew 33 per cent last year.

“In middle-income countries we see great potential,” says Olivier Charmeil, head of Sanofi Pasteur, the group’s vaccines unit. “Many of these countries do not yet have immunisation programmes of the kind we have in the western world.”

In middle-income countries we see great potential. Many do not yet have immunisation programmes of the kind we have in the western world

In rich countries, growth relies on either finding more diseases to immunise against — meningitis B, for example, is the target of new vaccines from GSK and Pfizer — or widening the reach of existing products, as Pfizer has done with Prevnar.

With children already extensively vaccinated in the developed world, much of the industry’s focus has turned to older age groups. GSK last year reported positive clinical trial data on a vaccine for shingles — a condition caused by the same varicella-zoster virus as chicken pox, but which is most common in over-70s.

“If governments want to embrace disease prevention, they should do it for adults as well as for children,” says Susan Silbermann, president of Pfizer’s vaccines business. “It is much easier to get one or two shots of a vaccine to prevent shingles or pneumonia than to end up getting one of [those diseases] and being incapacitated for weeks.”

Policymakers will be wary of attempts by the pharma industry to pile new costs on to budget-constrained health systems. But Ms Silbermann says the economic benefits of vaccines easily outweigh their price. “The cost of diseases can be as high as 30-fold more than the cost of vaccination.”

Vaccine manufacturers hope these arguments will prevail at a time when governments and insurers are becoming more rigorous in judging the costs and benefits of health interventions. 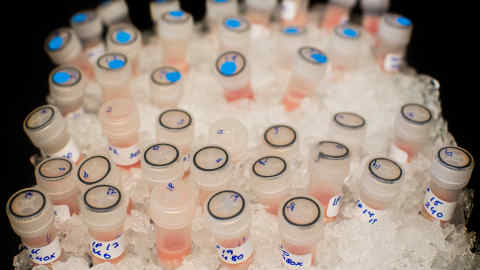 Pricing remains a sensitive topic, however, especially in the developing world. Médecins Sans Frontières, the health charity, last month launched a challenge against Pfizer’s patent on Prevnar in a bid to allow Indian companies to produce the vaccine cheaper.

Ms Silbermann says Pfizer already provides Prevnar at a substantial discount through Gavi, the global alliance that supplies vaccines to low-income countries. But Manica Balasegaram, executive director of the MSF Access Campaign, says it could be produced in India for $6 per child, compared with Pfizer’s reduced $10 price. “To make sure children everywhere can be protected from deadly pneumonia, other companies need to enter the market,” he says.

Critics argue that consolidation in the industry has left too few companies, developing too few vaccines — and that those that do exist tend to be aimed at rich countries. GSK’s recent acquisition of Novartis’s vaccines business further narrowed the range of competitors.

But Thomas Breuer, chief medical officer at GSK Vaccines, says consolidation was necessary to produce a more efficient industry. He cites GSK’s newly approved malaria vaccine — the first against the disease — as proof that the remaining companies bring innovation to developing, as well as developed, countries.

Malaria still kills more than 400,000 people a year, most of them children in Africa. But new weapons are arriving to aid the fight against it

Another example is Sanofi’s new vaccine for dengue fever, recently launched in the Philippines, for €20 a shot, in a public immunisation programme aimed at 1m children. “Sanofi has done well with dengue,” says Jayasree Iyer, executive director of Access to Medicines. “We’ve been telling them, ‘It is no good having a vaccine for dengue if you don’t have a plan to provide wide access’.”

Mr Charmeil says Sanofi must be allowed to make a return on the €1.5bn it invested in its dengue vaccine during 20 years of development, otherwise there would be no incentive for others to pursue similar breakthroughs. Pfizer makes the same argument about Prevnar, the latest iteration of which combines 13 separate vaccines and a batch of which takes two and a half years to produce.

Mr Charmeil says the complexity of vaccines, and the fact they are given to healthy individuals rather than to treat the sick, makes quality and reliability especially challenging. “The hurdles are a bit higher than in other parts of the pharma industry.”

Get alerts on GlaxoSmithKline PLC when a new story is published