From a magical honeymoon destination to a favourite Hollywood haunt

It’s the honeymoon destination of choice for A-listers and royalty, with its promise of pampered privacy in a magical Indian Ocean setting. Prince William and the Duchess of Cambridge and George Clooney and Amal Alamuddin are among the high-profile couples to have sought sanctuary on North Island. It’s no surprise, then, that this exclusive retreat earned more recommendations from our expert panel than anywhere else.

Eleven beachfront villas set the standard for “barefoot luxury”, with thatched roofs, carved banua-wood beds, sunken marble baths and walls that slide open to catch the sea breezes. The resort is rightly proud of its conservation programme, which seeks to restore the island’s biodiversity by eliminating harmful non-indigenous wildlife and replacing it with endangered native species such as giant tortoises and fruit bats.

But what really sets this place apart is the highly personalised service, achieved through a ratio of two staff to every guest. Our experts particularly liked North Island’s “no menu” policy, with meals being cooked to order. “A questionnaire ensures all your favourite foods and drinks are on site for your arrival: the best caviar, the finest champagne, even your own in-room larder,” says Frances Geoghegan of Cleveland Collection. “It’s the ultimate in luxury.”

From £5,065 for a one-bedroom villa, all inclusive; north-island.com

There’s a distinctly Gallic flavour to this intimate hotel on one of the most glamorous islands in the French West Indies. Vintage French linens and furniture adorn the guest rooms, there’s a Guerlain spa, and the acclaimed restaurant La Case de l’Isle specialises in French-influenced cuisine.

A few years ago the hotel was taken over by LVMH, the luxury goods group that also owns the Cheval Blanc Randheli in the Maldives and the Cheval Blanc Courchevel, but the verdict from regulars is that it has emerged from the transition in finer form than ever. Philippe Brown of Brown + Hudson applauds the “picture-perfect setting and impeccable attention to detail”. Nowhere is this more apparent than in the 40 elegant rooms, suites and bungalows, some of which have private pools, home cinema rooms and fitness suites.

From €660 for a Garden Room; stbarthisledefrance.chevalblanc.com

This former hunting lodge was built on the Bay of Arcachon in the 1930s to cater for the French upper classes who flocked here for the health benefits of sea air and salt water. There’s more than enough of both to go round at this characterful hotel, which sits on a strip of soft sand between pine forest and Atlantic Ocean, overlooking the Dune of Pyla, the highest in Europe. In 2010 designer Philippe Starck was enlisted to breathe new life into the hotel, and the result is as playful as you would expect, with modern sculptures, colourful flashes of Murano glass, a giant chess set and asymmetric mirrors — although guest rooms are pleasingly understated. Norman Howe of Butterfield & Robinson praises the restaurant, which has “one of the most dramatic patios overlooking the sea that you will ever have the good fortune to dine on”.

Near Arcachon, Aquitaine; doubles from €275; lacoorniche-pyla.com

Owned by Red Bull billionaire Dietrich Mateschitz, this private island retreat has 25 plantation-style villas set among coconut groves and on coral sand beaches — and one of the highest staff-to-guest ratios in the world (350 employees to 80 visitors).

From $6,000 for a one-bedroom villa, all inclusive; laucala.com

“This is the place to live out luxury desert island fantasies,” says James Jayasundera of Ampersand Travel. From the moment the private plane touches down on the island’s airstrip, you know you’re in for something special. Spend days windsurfing, sailing or scuba diving, relaxing in the spa or taking it easy in the hammock of your luxury casita.

From $1,100 for a one-bedroom casita; amanpulo.com

Il Pellicano was a favourite haunt of Hollywood film stars in the 1960s, playing host to everyone from Charlie Chaplin to Henry Fonda. The hotel recently celebrated its 50th birthday and still retains an air of old-school glamour, with 50 elegant guest rooms and suites, a Michelin-starred restaurant and a beach club with heated seawater pool overlooking the Tyrrhenian Sea.

Jarrod Kyte of Steppes Travel is in no doubt that the newest addition to the Soneva stable of luxury beach retreats is set to make a big splash: “Kayak to the spa and cinema, watch the stars from the revolving roof of your villa by night, and in the morning wake up by whooshing down your own private slide into the Indian Ocean,” he says.

From $1,870 for a one-bedroom Water Retreat; soneva.com

Sunset dhow cruises, snorkelling and paddle boarding are just a few of the laidback activities on offer at Xanadu Villas, which opened last summer on Zanzibar’s east coast. Six light and airy villas with private plunge pools are set in tropical gardens around a central pool and dining area, just steps away from a white-sand beach.

Near Dongwe; from $600 for a one-bedroom villa; xanadu-villas.com

The chance to spot whales from the balcony of your bedroom (between June and October) is just one of many reasons to check out this stylish family-run hotel on the outskirts of Hermanus. The atmosphere is relaxed, and the 11 suites have been designed with flair, combining contemporary art with antique furnishings.

Hermanus, Western Cape; from ZAR3,300 (£212) per person for a double room, all inclusive; birkenheadhouse.com

Lizard Island is a national park that sits on Queensland’s Great Barrier Reef and can only be reached by private charter flight from Cairns. There are just 40 rooms and suites here, and with a total of 24 white-sand beaches to choose from there’s a good chance of finding a secluded spot for a gourmet picnic or some snorkelling. 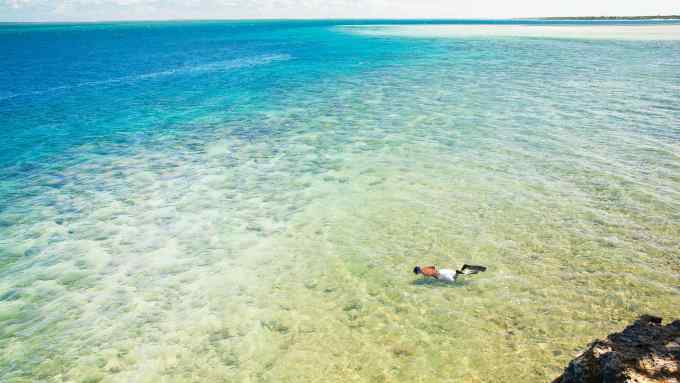 From the wild sands of a private island off Mozambique to the glamorous terrace of a Tuscan villa, find your perfect beach retreat in our insiders’ guide, chosen by a panel of travel industry experts