Julia Gillard on resilience after misogyny

For many people Julia Gillard meets outside her home country, Australia seems to mean one thing in particular. “It becomes clear during the conversation that, apart from kangaroos and koalas, my speech is the only thing they associate with Australia,” she says.

She is only half-joking. The speech is, rightly, famous. Delivered during question time in Australia’s House of Representatives in 2012, it is a 15-minute riposte to the misogyny to which Ms Gillard had been subjected by the opposition and the press since taking over as prime minister in 2010.

The sexism ranged from the irritating — commenting about her clothes at a Nato meeting — to the extreme, when she was compared to a “barren” and “non-productive old cow”. An opposition fundraising dinner menu included “Julia Gillard” quail — “small breasts, huge thighs, and a big red box” — insults later repurposed against Hillary Clinton during her presidential campaign.

The speech has been viewed more than 3m times on YouTube and resonated with women — and men — not just in Australia but around the world.

This was partly because of Ms Gillard’s delivery. Facing her adversary, she barely glances at her notes, and speaks forcefully. She delivers a series of rhetorical blows against Tony Abbott, then leader of the opposition and later prime minister, in which she details a range of sexist behaviour and comments by him. At first, many in the chamber try to laugh off the criticism but then look increasingly uncomfortable.

“Going into question time, sometimes you know it feels right,” she says during a recent visit to the Financial Times offices in London. “Walking in, I felt loose, I felt comfortable.”

The speech had an effect, at home and abroad. Domestically, it did not save Ms Gillard’s political career. She stepped down as prime minister and leader of the Australian Labor party in June 2013, and left politics soon after.

Internationally, aided by the connections she made as prime minister, it has opened doors and sparked new ideas.

It certainly chimes with her newest role as inaugural chair of the recently launched Global Institute for Women’s Leadership at King’s College, London.

The institute will address why women are under-represented in leadership positions across sectors and countries, as well as how a female leader’s performance is often undervalued.

Ms Gillard says the institute will “relentlessly” focus on gathering and disseminating evidence of what works, filling “gaps and holes” in current research. While others, including Harvard University’s Kennedy School of Business, have devoted considerable resources to this task for years, Ms Gillard believes the institute will add something new.

She hopes it will “harness existing enthusiasm” to look at women’s leadership across the board — in politics, business, the judiciary, the news media and civil society. She says the institute, which has appointed a director, Professor Rosie Campbell, will disseminate its practical findings to women’s activist groups, political parties, governments, companies, civil society and other research centres to ensure the information about what works “gets into the hands of those most able to use it”.

The institute is in its early stages but Ms Gillard says planned work includes: providing more empirical evidence of the effectiveness of gender diversity initiatives; examining how to engage men and boys in the fight for gender equality; and how to share experience and knowledge better across borders.

“Why are women more likely to be [in] parliament in Rwanda, lead news organisations in Estonia, preside in courtrooms in Slovenia and work in technology companies in Malaysia?,” she says. “It’s clear that there are cases where learning from other countries is currently not being harnessed.”

Ms Gillard brings more than her stint as prime minister to her new job. After her family emigrated in 1966 from south Wales to Adelaide, South Australia, she qualified as a lawyer in the 1980s. In her political career, she was a full participant in the tumult of Australian politics, and had dispatched her Labor party predecessor to become prime minister.

In her autobiography, My Story, published in 2014, she writes of the qualities women in power require — one of the greatest being resilience, both personal and professional.

Her own resilience, she says, meant that when her political career in effect ended in her early fifties, emotion did not “sweep me away”. Her tips for building resilience include: knowing your purpose; nurturing your sense of self; making choices about how you will react to events; cherishing family and friends; and not looking down on others.

The book did not, however, disguise her anger at what she still sees as lack of support from many male colleagues. With the benefit of hindsight, she says she would have sought out more male “champions” outside her immediate political sphere to back her up. That is advice she now passes on to other women seeking leadership roles. 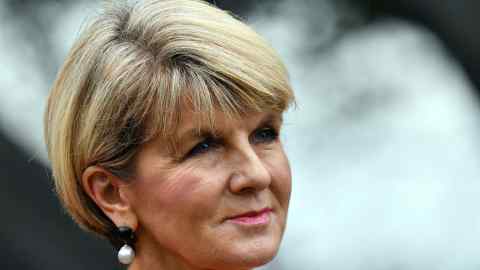 Even in the few years since she left her top job, there has been significant progress in remedying gender inequality, spurred both by popular movements such as #MeToo, which campaigns against sexual harassment in the workplace, and by a growing body of research, to which the Global Institute for Women’s Leadership hopes to add.

“You only solve big problems when there’s a concerted effort to analyse and get to grips with them, and we’re at least in that phase,” she says. She points to her experience of campaigning for the Labor party to adopt affirmative action targets for female candidates for parliamentary seats. It took careful, patient argument, but the rule was brought in.

Ms Gillard is still getting stuck in to the fight. As well as her role at the new King’s institute, she chairs the Global Partnership for Education and Australian mental health charity Beyond­Blue, as well as sitting on the boards of an Australian property finance company and a software educator in New York.

“There’s lots of things I miss about being prime minister and the main thing I miss is . . . to not be able to make things happen because you no longer have those levers in your hands,” she says. “But life moves on, you move on.”

In her own words

ON SEXISM
‘Looking back on my time in politics . . . I wish, with hindsight that I had called it out earlier’

ON MOVING ON
‘If you’re waking up every morning still burning about something that happened in 2010, it wouldn’t be much of a way to live’

ON BECOMING RESILIENT
‘Know your purpose; nurture your sense of self; make choices about how you react to events’