Would rethinking the profession’s structure and increasing visibility stem the exodus of female architects at senior levels?

Jeanne Gang is one of the world’s most successful architects. Studio Gang, the practice she founded in 1997, has designed ambitious buildings, including the 363m-tall St Regis tower in Chicago — the third-highest tower in the city and the tallest in the world by a woman.

Yet Gang still occasionally hits gender barriers. “The difficulty, sometimes, is connecting with that person who is going to give you that job,” she says. “You do need to bond with your architect. If it’s a guy who is an older banker, he might connect better with someone who he thinks is cooler than me. If it’s the top male CEO choosing, they’re more likely to choose someone like them.”

She adds: “It’s not purposeful bias; I don’t hold it against people. But when we have more women clients, it will equal out.”

Architecture needs more women to design buildings and commission them — and not just for reasons of fairness. There is broad evidence that teams with stronger gender and ethnic diversity are better at creative problem-solving.

“Architects are problem solvers — there are thousands of problems for which we find solutions,” says Cécilia Gross, an architect and partner in her early 40s at Amsterdam-based studio VenhoevenCS. When women drop out of the profession, she points out, they take their ideas, designs, and ability to solve problems with them.

About half of US architecture students are women. However, the number who go on to become registered practitioners, let alone make it to Gang-like career highs, is low. According to an American Institute of Architects report published in 2020, just 17 per cent of registered architects were women — a proportion the institute says has increased steadily since the 1970s. In the UK, the most recent data finds the proportion is just over 30 per cent, according to the Architects Registration Board. That is up from 21 per cent in 2011.

The problem in the US is compounded by demanding hours and “paltry” benefits for maternity leave, says Gang. “It’s got to come up to the times.”

Many female architects say their participation and influence has been held back by a lack of senior role models and a career typically organised around conditions that tend to favour men: long, relentless hours.

If architecture is to keep more of the women that are currently filling junior roles, many believe it must do more about career structures

UK architect Zoë Berman, now in her mid-30s, co-founded Studio Berman seven years ago, as an architectural practice focused on cultural and educational projects. She says she was treated equally with male counterparts in the early stages of her career.

“I don’t think I noticed a hugely gendered context at that time,” Berman says. “I had a certain naivety and there was no question that, as a young woman, you had a right to be in those rooms. But the [differences] started to come when I started to progress and have more responsibility.”

Part of the problem, she says, is a lack of pay parity. In the UK, the mean gender pay gap for female architects was more than 18 per cent last year, slightly down from nearly 20 per cent the previous year, according to data from Riba, a professional body for architects.

“Architecture is a long course of study — seven years — and then you have to climb the ladder, so you’re not in a financially secure position at the point at which you might want to start a family,” says Berman. “And, even if you don’t, how many long hours, years of studies, macho culture of late work — how long do you want to do that without seeing a financial reward?”

In 2018, Berman set up Part W, a collective campaigning for greater participation and equality for women working in the built environment, and greater recognition for their contribution. One early campaign focused on the awards system — the main mechanism for celebrating the highest standards of achievement.

That early project found that female architects’ achievements are generally overlooked, and that only a tiny fraction of international architecture awards had been won by women. “It is emblematic of how women’s work in practice is not acknowledged,” says Berman.

The group’s latest project is to map digitally the buildings in London designed by women.

Part W argues that a lack of visibility makes women’s absence in meetings, boardrooms and senior positions seem normal. Gross has similar observations: “Clients tend to assume I am not as senior as I am.”

Alison Brooks of Alison Brooks Architects — who has won the Riba Stirling Prize, the Manser Medal and the Stephen Lawrence Prize — pinpoints the career-structure problem for women architects who want children, and the expectations around childcare. She often hears women say their salary after tax is not enough to cover the cost of childcare, so they “cannot justify” continuing to work full-time,” she says. “Culturally, we still expect women to bear the primary role of childcare and running a home.”

If architecture is to keep more of the women that are currently filling junior roles, many believe it must do more about career structures.

Sasha Bhavan of Knox Bhavan, another UK practice, is in her early 60s. She says conditions for women who want to have children have improved since she started, when “hardly any women went the full course”.

Bhavan, who had her first child in the late 1980s, notes that she benefited from working for architect Ted Cullinan, whose studio she says was a “forward-thinking” employer that supported her with leave and maternity pay — unusual for the time.

Nevertheless, she says “I did feel an enormous responsibility to go back to work very quickly. I felt I would be missing out and falling behind.” She typically took three months’ maternity leave.

After her third child was born, she set up her own practice in order to work from home.

But Bhavan, who is of Sri Lankan heritage, says the biggest change in her professional life has been the emergence of more female role models. “I didn’t see women like me ahead of me, and no women who were anything other than white. There was nobody to look to. Whereas now there are.” 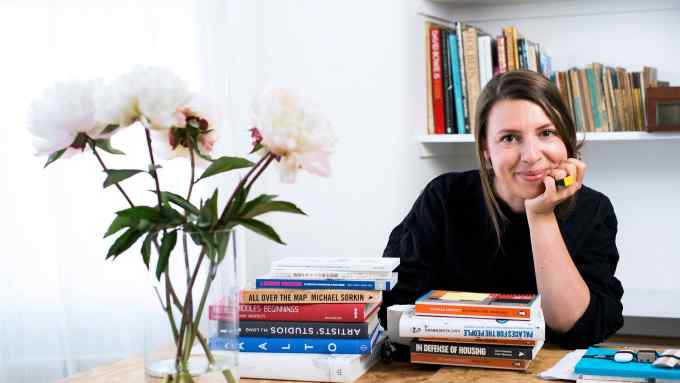