We use cookies (opens in new window) for a number of reasons, such as keeping FT Sites reliable and secure, personalising content and ads, providing social media features and to analyse how our Sites are used.
Manage cookies
Accept & continue
FTfm Passive Investing

The pressure exerted on active fund managers by the fast-growing passive investment industry has intensified, with index-tracking funds increasing their share of assets in the US by $2tn since 2013.

Passive funds now account for a third of mutual fund assets, up from a quarter in just three years, according to figures compiled for FTfm by Morningstar, the data provider.

Active funds, by contrast, have seen their hold on the US investment industry decline steadily since 2013, despite total assets rising 14 per cent to $9.8tn over that period.

Amin Rajan, chief executive of Create Research, the asset management consultancy, said the growing strength of the passive market in the US was “very worrying” for active managers.

“Passive fund houses are scoring direct hits at the revenue streams of active managers. There are fears that some investors may never return to active once they switch.”

Haley Tam, asset management analyst at Citi, the US bank, said big active fund houses are alert to the challenges posed to their business models by the popularity of passive funds, which are on average four times cheaper than actively managed alternatives.

“The bigger players are thinking about this and they are all [trying to combat it],” she said. “I am not surprised [the market share of passive funds] has gone up that quickly. [Since 2013] US interest rates have stayed low, and so investors have asked why pay 50 basis points for a corporate bond fund when the yield is less than that.”

The data show that passive funds have increased their share of the US mutual fund market in every month over the past year, taking their total assets to $5tn.

Traditional active fund houses including Franklin Templeton, Legg Mason, Janus Capital and Fidelity have attempted to fend off the threat posed by the growth of passive investing by launching their own benchmark-tracking products, or acquiring smaller passive specialists.

But there are doubts about how successful these attempts to take a slice of the passive market will be, given the size of fund houses such as BlackRock and Vanguard, which dominate the index-tracking industry.

Unless you are a gorilla like BlackRock or State Street, you can’t compete [in ETFs]

The chief executive of a large US active management house, who requested anonymity, said: “These large traditional fund managers can’t get into the exchange traded fund business. Unless you are a gorilla like BlackRock or State Street, you can’t compete there.”

Other fund houses that have chosen to remain entirely active have instead launched public attacks on the passive industry.

Kevin Murphy, equity fund manager at Schroders, Europe’s second-largest listed asset manager, which only runs active funds, wrote in a recent blog post: “Index-tracking funds are the dictionary definition of ‘dumb money’. They undertake no research. They do not care about the quality of a business or its management team or whether or not it has debt or whether or not it is cheap.” 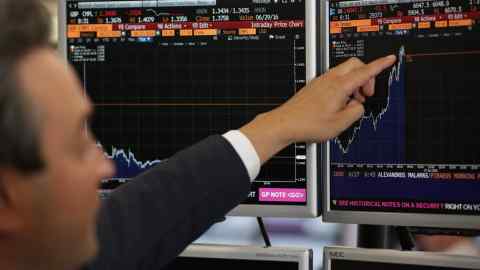 Pekin Singer Strauss, a US active investment boutique that oversees $800m of assets, said in its April quarterly letter to investors: “Like all financial-product fashions, today’s excessive interest in passive investments has generated a rush through the passive investing doors that creates significant risks.

“Most long-term investors are better off relying on the capable hands of a trusted, and active, investment adviser.”

Although asset management specialists expect the passive market to continue to take market share in the US, they echo concerns about the impact of the growth of index-tracking strategies on markets.

Mr Rajan said: “Bigger inflows into passive funds will expose them to concentration risk and momentum risk. The former arises when a stock value rises simply because it is included in the index, irrespective of its intrinsic value. The latter arises when herding causes massive overshooting by indices in upward and downward directions.

“Indices are becoming ‘dumb’ as they gain in popularity, making a reversal inevitable eventually. No one knows at what stage indices become seriously dumb.”

Letter in reponse to this article