The boss is back but the workers are staying at home

Such is Chesley Maddox-Dorsey’s devotion to her job as chief executive of American Urban Radio Networks that she has been working each day from the company’s Manhattan office for the past nine months — long before she received her Covid-19 vaccination.

As the pandemic eases and New York City reopens, Maddox-Dorsey is contemplating how to bring back her staff, many of whom have grown accustomed to working from home over the past year.

“I think it’s going to be more nuanced and complicated than that,” she said, when asked if merely being vaccinated would be sufficient for employees to be persuaded to resume office life. Of her fellow chief executives she observed: “I think it probably is a bit daunting to all of us to realise that everyone doesn’t have the same lust for coming to the office that we do.”

Across New York and other big cities, chief executives have returned to offices that are, oftentimes, their seat of power and most cherished environment. Yet statistics suggest their workers do not feel the same pull — whether it is because of health concerns, a lack of childcare, or the misery of commuting.

As of May 5, the “back-to-work” barometer published by Kastle Systems, the maker of office security systems, showed just 16.3 per cent occupancy in New York offices, up 0.1 per cent from the previous week and just a few percentage points from November.

“They’re trying to figure out how to get them back in, and who they can really push,” Ruth Colp-Haber, chief executive of Wharton Property Advisors, said of the CEOs who consult her on their companies’ property needs.

David Rubenstein, chief executive of Rubenstein Partners, a commercial real estate company, agreed. “Most CEOs are back, and they want their workforce back.”

At stake are competing visions of the workplace of the future, and the degree of flexibility that workers should have in deciding where and how they do their jobs. Or, as Colp-Haber predicted in a recent note to clients, “class warfare may soon be coming to an office near you regarding the scope of hybrid work”.

The outcome is also of vital importance to cities such as New York, which have built their economies on densely packed office towers, and the investors who own such buildings. If more people work from home, demand for office space could fall and those properties may be worth far less. Already, rents are under pressure, thanks to a glut of unwanted space that companies are dumping on the sublet market.

This would not be the first time a pandemic has tilted the labour-management balance. After the Black Death swept Europe in the 14th century, leaving fields without farm hands, landowners were forced to grant better pay and conditions to serfs.

In recent days, several companies have issued edicts for employees to return to the office. JPMorgan Chase became the first major financial company to set a firm date, telling workers last month that it expected most back in July. (Perhaps that is not surprising since the bank is building a new 2.5m square-foot headquarters on Park Avenue). Blackstone, Goldman Sachs and others have since followed suit.

In a recent letter to staff, Google chief executive Sundar Pichai predicted that 60 per cent of its workforce would spend a few days a week in the office, with 20 per cent permanently remote and another 20 per cent in the office full time.

IBM chief executive Arvind Krishna told Yahoo Finance he expected 80 per cent of staff to adopt a hybrid model, and that it would take a year or more for the situation to settle.

In private, some executives say they are inclined to turn the screws but fear that doing so could result in talented workers bolting for rivals that are willing to allow more flexibility.

“I would say the head of HR and the chief executive of many companies are having that discussion right now,” said Rubenstein, who believes most workers will follow the boss back to the office by September, if not sooner. By then, schools should be reopening — at least in the US and UK — and vaccines will have been made available to anyone who wants one.

“I don’t believe that huge sea change is going to happen,” he said. “People are going to want to be around when decisions are being made and things are happening.”

But Phil Kirschner, who led WeWork’s outreach to big companies, and is now a workplace consultant, sees more dramatic changes afoot. The pandemic, he argued, has merely confirmed a shift towards a more flexible work life that has been under way for years — but one that many chief executives refused to acknowledge.

“The desire for more flexibility is not new. What’s been holding it back is managers who wanted to see workers in front of them to be assured they were productive,” he said. “And now that bandage has been ripped off.” 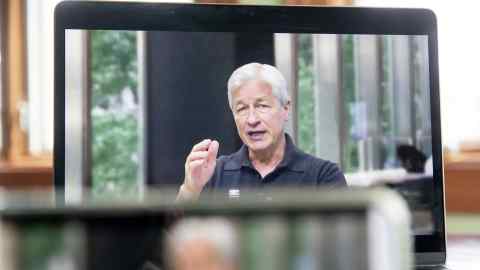 Even before the pandemic, power was shifting as companies vying for talented young workers joined an “amenities” arms race in an attempt to make their offices more appealing to a new generation. In a world in which fancy coffee, yoga rooms, massages, grocery deliveries and outdoor space are now de rigueur, flexibility — the ability to work remotely at least part of the time — is another inducement.

“Companies have to work harder than ever to make working for them feel truly compelling,” Kirschner explained, describing the mindset of young workers as: “‘I used to have to work in the office — now I don’t. So you have to convince me why I should.’”

Nadir Settles, who oversees 6m sq ft of New York office space for Nuveen, has a similar view. His company is investing in hotel-like comfort for its offices. “Whoever has the best curated environment, that’s going to welcome employees back, that’s who’s going to win,” he said.

Others are talking about on-site childcare and medical care. In New York, where public transport is looming as a particular obstacle, some are discussing tax incentives for commuters.

Some jobs are more suited to flexible work than others. A programmer, for example, who might carry out much of an assignment on their own — versus a marketing executive constantly interacting with others.

Like many chief executives, Maddox-Dorsey says she is willing to tolerate more flexibility after Covid but worries that the co-ordination and collaboration needed to produce radio programming and then sell it will suffer.

“To have in-moment feedback with team members, you need to be all engaged at the same time,” she said. “So if you have people deciding at the beginning of the week what day they’re coming in, it feels like we’re working more toward individual schedules as opposed to having a joint goal as a company of what we’re trying to accomplish.”

She is also discovering that it is not straightforward to determine who needs to be in the office and who does not. An older employee, with deep experience and relationships in the company, may not see the point of enduring a long commute to put in face time or perform a task they could just as easily do from home. Even less so if they have young children.

But their absence could deprive younger employees, who benefit from working by their side. “It’s a personal choice but what we as CEOs have to do is manage a myriad of personal choices,” she said, “and sometimes they’re diametrically opposed.”