Traffic congestion: is London running out of road?

Buses, taxis, vans, trucks and a few cars creep up the Strand, past the Savoy hotel and Charing Cross station, eventually reaching Trafalgar Square. It is a typical morning on one of London’s busiest thoroughfares and the city’s transport chiefs privately admit that anyone who happens to be stuck on a bus would almost certainly be better off walking.

The scene is replicated citywide and the situation has become noticeably worse since early 2015. By the end of the year a five-mile journey through central London was taking an average of nearly 30 minutes — almost five minutes longer than at the start of the year.

Thirteen years after a congestion charge was levied on drivers in a pioneering and initially successful attempt to get the city moving again, traffic has slowed to pre-charge speeds. In 2003, the first year of the charge, vehicles moved at an average of 10.9mph in the zone, up from 8.8mph the previous year, according to figures from traffic analysis company Inrix. In 2015, the average speed was 8.3mph.

The worsening situation has been blamed on many factors, including the growth of Uber car hires and Amazon deliveries, the installation of cycle lanes and pressure from residents to reclaim the streets from cars. Any solution must address the contentious question of how the city allocates space on its narrow roads.

Among the alleged culprits, one is noticeable by its absence — the private car. The number of people travelling into central London in their own car in the morning rush hour has been declining steadily for years. It fell by half between 2000 and 2014 and now accounts for about one in 20 people entering London during the morning peak.

Terrorism
Sadiq Khan on London after Brexit: ‘Open is what we are’ 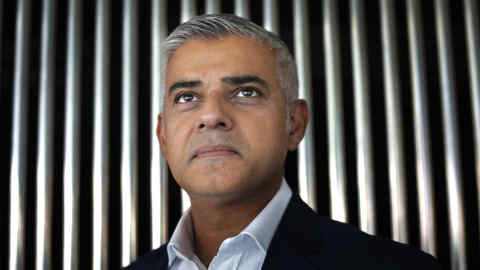 “The only private cars on the road are residents and rich people. We’ve priced off the rest of it,” says Leon Daniels, managing director for surface transport at Transport for London (TfL). (Residents of the congestion charge zone do not have to pay the £11.50 daily fee.)

However, this presents a dilemma unique to London. It has become commonplace to argue that driving in private cars is selfish and to suggest that people should take a train or bus instead, but what to do about other road traffic is a much thornier question.

“London is close to proving that you can take away all the private cars and still have chronic congestion,” says Tony Travers, professor of local government at the London School of Economics. “There needs to be a thought-through policy about what the roads are for, with a hierarchy starting with emergency vehicles and working down.”

One target of criticism has been Uber, the US car-hailing app that has grown rapidly in London, as it has in many other cities. This August there were 81,710 cars licensed to operate as private hire vehicles — a 64 per rise in three years. The number of traditional black cabs, at about 22,500, is the same as it was in 2011, the year before Uber was launched. Attempts to curb the number of Uber cars on the road have so far failed. A regulatory crackdown proposed by former mayor Boris Johnson triggered a public backlash last year, while central government has blocked calls for a cap on their number.

The latest front in the battle is the argument that if travelling by car suddenly becomes much easier and cheaper, more people will do it and congestion will increase. Uber, however, points out that most of its business is away from the centre of town and at night. According to a study of its data by Inrix, only 6 per cent of Uber trips last year were in central London, during the daytime and on a weekday.

Less controversial but harder to tame is “white van man”. The number of light goods vehicles is rising sharply, which TfL suspects is because of the tendency for people to have personal parcels delivered to their place of work in central London.

London’s growing economy has been another cause — freight traffic tends to move in sync with the economy. “Every crane you see is a building, and all those buildings are eventually going to be full of people, and all those people are going to need their photocopier paper delivered,” says Daniels.

The delivery industry is unregulated and for companies in it, the £11.50 daily charge is a small cost of doing business. “It’s a change of lifestyle in terms of delivery vehicles — people want things instantly,” says Caroline Pidgeon, chair of the London Assembly’s transport committee. “Not in five days — they want it in a few hours, to their office.”

Although Daniels suggests that “the right thing for any responsible person to do is to have their Amazon parcels delivered to their home”, it is unclear whether many people will heed his advice voluntarily.

Surprisingly, the net effect of these changes to London’s traffic appears to be small. According to most sources of data, the overall amount of traffic is either static or falling slightly. “Traffic levels have been fairly steady over the past four years; they have basically been the same,” says Dominic Jordan, chief data scientist at Inrix. “However, traffic speeds have fallen noticeably. If it isn’t down to extra vehicles, it’s down to a reduction in capacity.”

A range of factors have cut the amount of traffic that London’s roads can handle. One of the most obvious examples of the reallocation of road space is the reservation for cyclists of one lane on two key arterial routes. Big construction projects — of which there are currently many in London — often encroach on the roads around them, while some argue that there is an insufficiently strict approach to utility companies that dig up the roads.

London is close to proving you can take away all private cars and still have chronic congestion. There needs to be a policy about what the roads are for

Pressure from residents to close off “rat runs” and restrict traffic to main roads has also played a part. While key roads are controlled by the city, the rest are the responsibility of London’s 33 local councils, which tend to listen to their residents.

“There’s actually quite a lot of road space in central London, but rightly or wrongly much of it is made difficult for traffic to use,” says Alexander Jan, a director at engineering consultancy Arup. “Perhaps because of pressure from residents, authorities have found themselves funnelling traffic down a few major roads that sit next to often empty streets.”

This manifests itself in other ways. A steadily increasing proportion of roads have speed limits of only 20mph, including all of the central borough of Islington. Meanwhile, many road junctions are being redesigned, making them less efficient at processing large numbers of vehicles and better for pedestrians and cyclists.

Explaining a redesign of Elephant and Castle, a busy south London junction notorious for accidents, TfL says: “Currently, traffic dominates the area, and there are more collisions here than at almost any other junction in the capital. Changing the way traffic moves around the area is expected to reduce collisions by a third. Journey times are expected to increase for all road users.”

There’s actually quite a lot of road space in central London, but rightly or wrongly much of it is made difficult for traffic to use

Back on the Strand, the traffic still crawls. But despite the seemingly random and unpredictable nature of London traffic, there is something else at play. Controllers sitting in an air-conditioned TfL office block, in front of an impressive array of monitors, exert a remarkable degree of control over the way traffic flows.

They use long streets such as the Strand as a queue, and the traffic permitted to enter Trafalgar Square at the end is monitored so that the junction does not seize up. At the flick of a switch, traffic lights across the city can be reprogrammed to choke traffic away from a gridlocked junction, while sensors buried in the road can automatically give priority to different lanes according to the volume or type of traffic that is waiting at each.

TfL, however, is starting to run out of road — it reckons that in about four years it will have exhausted all possible technological tricks for squeezing as much traffic through the same streets. That puts the onus on politicians. As the city’s population soars towards 9m, it will fall to mayor Sadiq Khan to decide who wins priority in using London’s precious little road space.