Three executives share their experiences of how they nurture staff

Human resources has evolved from a compliance-only function to a strategic business role, says Carmel Galvin. “The HR professional today is in part a data analyst, a consultant, a marketer, an international business person and a workplace designer.”

As an analyst, she says, an HR professional must use a host of technology platforms and data, while being an effective adviser to the business. This means “getting under the bonnet of the business, knowing and understanding the critical players and winning managers’ trust so you can provide valuable influence”.

Technical and business skills are important to the modern HR professional, she adds, but they must also be open minded to change. Ms Galvin has more than 25 years of HR experience in multinationals. In her role at Glassdoor she believes she is “at the forefront of the change taking place in the employment industry”.

“In a sense, we are our own living lab . . . a job site that is differentiated through its offering of workplace transparency,” she says. Glassdoor displays company reviews provided anonymously by employees.

Another example of being a “living lab” is the platform’s new salary product called Know Your Worth, which allows people to look up personalised salary data. “We rolled it out internally before ever launching it publicly,” Ms Galvin says.

The founder and chief executive of UKFast, a cloud technology business, says that in a company with a relatively flat management structure like his there is no need for a human resources department. “HR has a reputation for being too strong and powerful. We’re all grown-ups.”

The company, which started in 1999, now employs 400 people. “You don’t need HR. Most of it’s about common sense,” Mr Jones says. However, he adds that as a result senior management should “never be too far away from the coalface”. He also accepts that while those who have been with the company since the early days may feel relaxed approaching the chief executive, new staff may not. 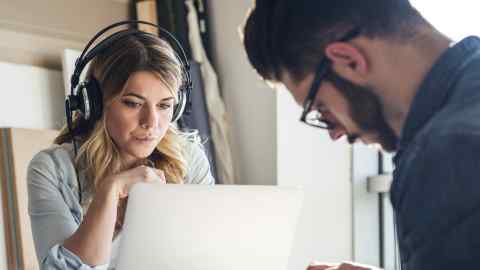 When his company started to grow, he began measuring things such as call times. Productivity initially went up, but then dropped off. So he ditched such observations, believing that his employees would do better if they were not monitored constantly and instead trusted to work efficiently. The company has various perks, such as an extra week off for newly married employees and a £10,000 bonus to mark 10 years at the company, as well as sleep pods.

He dismisses HR’s growing dependence on data, saying: “You want to spot problems before they happen. I don’t want data to be the driver.”

Trained as a chartered accountant, Laura Hinton has a background working as an auditor. Ms Hinton got into human resources when she set up a consulting practice at BDO, the accounting and business services firm, selling expertise in people management and development. It was only last year that she moved into an operational role. At PwC, she splits her time between client-facing work, advising on human resources and overseeing human resources at the professional services firm.

As with other disciplines, such as law and banking, she sees artificial intelligence as playing an increasingly important role in human resources, such as allocating employees to projects and managing their time. She also foresees greater use of predictive data, for example to reveal which employees may leave their company. “Gone are the days when you can say ‘I don’t do numbers,’” she says.

Yet despite the trend for greater use of data, Ms Hinton insists that “people skills” must also be developed in tandem. “They need emotional intelligence, relationship skills and the ability to think creatively about the future.”