A meticulous account of the killing of journalist Jamal Khashoggi

We’ll send you a myFT Daily Digest email rounding up the latest Non-Fiction news every morning.

On October 2 2018, at 1.14pm, Jamal Khashoggi, probably Saudi Arabia’s best-known journalist, walked into the Saudi consulate in Istanbul, by prior appointment, to collect documents he needed for his forthcoming marriage. He was never seen again.

We now know he was murdered within minutes by a 15-man Saudi hit squad, probably drugged and asphyxiated, then dismembered and stuffed into bags. His desecrated body has not been recovered.

At first, the Saudi authorities shrugged and said Khashoggi had left the consulate — by the back door, although his fiancée Hatice Cengiz was waiting for him at the front door. The Saudis then said a negotiation to persuade Khashoggi to return to Riyadh from self-imposed exile in Washington had gone badly wrong. Khashoggi, a court insider whose outspokenness fell foul of Mohammed bin Salman, the crown prince and de facto Saudi ruler, had been writing trenchant if measured columns in the Washington Post on the unbridled autocracy of the headstrong young prince. As tempers inside the consulate frayed, the Saudis recounted, a fist-fight broke out and Khashoggi, 60, somehow did not survive it.

At this point Turkish authorities, led by their enraged president, Recep Tayyip Erdogan, a friend of Khashoggi’s, started a steady drip of leaks from audio-tape their spies collected by bugging the consulate and from intercepts of hit-squad smartphones. What emerged from these tapes, eventually shared with the CIA and other western spy agencies, was a premeditated murder of monstrous depravity.

Jonathan Rugman, in his superb account of this horrendous affair, quickly dismantles the third and final Saudi lie about the assassination: that it was a rogue operation after a planned rendition went wrong. Excerpts of conversation between two key hit-men make this clear. Well before Khashoggi’s arrival at the consulate, Lt Col Salah al-Tubaigy, a pathologist, was recorded discussing his dissecting techniques and whether the prospective victim’s hips were too wide to fit into a bag. Maher Abdulaziz Mutreb, a brigadier general and head of the hit squad, one minute before Khashoggi entered the consulate asked: “Has the sacrificial animal arrived yet?”

When the verdict is out, when justice is done, when a few heads get chopped off, investors will be back

The tissue of Saudi lies was so thin even Donald Trump, admirer and patron of Prince Mohammed who had promised the US president hundreds of billions in arms purchases and investments, described it as “the worst cover-up ever”. The Saudis were, of course, trying to prevent world opinion from concluding the murder had been ordered by a rogue crown prince.

Mohammed bin Salman, often known as MbS and now 34, after being handed most of the keys to the kingdom by his father Salman, 83, who became king in 2015, spent the year before the Khashoggi murder clearing his own path to the throne in a series of Shakespearean palace coups. He seized control of every Saudi security and intelligence service. They all answer to him. It stretches credulity to imagine Khashoggi’s death was accidental or that it could have occurred outside the Saudi chain of command at the hands of elite agents — including members of MbS’s royal guard like Mutreb — who were equipped with private planes, diplomatic passports and, of course, an autopsy specialist with a bone-saw.

After the murder, the New York Times ran a story saying American spy agencies in 2017 intercepted a phone call in which Prince Mohammed told a top aide he would use “a bullet” on Khashoggi unless he ceased his incessant criticism. That call was before the Post published its first regular Khashoggi column — but after the Saudi court had banned him from writing or tweeting — which, as Rugman recounts, for Khashoggi was “like being locked up in your own mind”.

The grisly consulate killing ignited the worst diplomatic firestorm between Saudi Arabia and the US since 9/11, when 15 of the 19 hijackers who attacked America were Saudis. But, as Rugman laments, this died down. Eleven unnamed individuals await an opaque trial in Riyadh. The CIA is confident MbS was behind the killing. The transactional Trump shrugs it off: “Maybe he did, maybe he didn’t.” 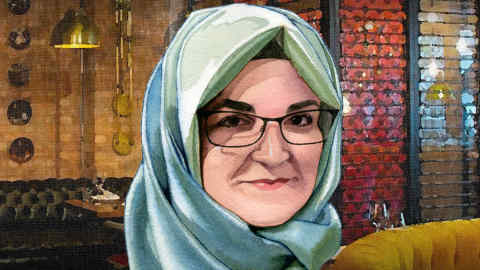 The Killing in the Consulate is rich with telling detail and narrated with unobtrusive skill. A former Turkey correspondent, Rugman is especially good on the motivations and machinations of Erdogan, as he worked diligently to discredit the impulsive Saudi crown prince, a rival he has tended to treat as an impertinent upstart.

But that upstart will host next year’s G20 grouping of the world’s most developed nations. Investors shunning the kingdom and its petrodollars will be back. Rugman quotes an unnamed prince talking to the Wall Street Journal: “Time heals. And when the verdict is out, when justice is done, when a few heads get chopped off, it will be back.”

If you come away from this meticulously assembled book sensing that MbS is a dangerous man, trust your instinct.

The Killing in the Consulate: Investigating the Life and Death of Jamal Khashoggi, by Jonathan Rugman, Simon & Schuster, RRP£20, 368 pages

Join our online book group on Facebook at FTBooksCafe. Listen and subscribe to Culture Call, a transatlantic conversation from the FT, at ft.com/culture-call or on Apple Podcasts