Why bond yields are so low

Bond yields have never been lower. In much of the world they are negative. Can they conceivably move lower still? And what might happen if and when they finally reverse and rise again?

Amazingly, it is quite possible that the bull market in bonds could continue, pushing yields down further. As to the consequences of when the market finally reverses, much depends on how that happens. A steady correction would be healthy for many; a swift rise in rates could become a systemic disaster.

First we need to ask how it came to pass that people are prepared to pay for the privilege of lending their money to governments, which is what a negative yield implies.

As always in investment, there are separate short-term and long-term factors. At least three broad reasons have been advanced for the decline in yields. All have some truth to them, but over different timescales.

First, falling bond yields are driven by the macroeconomy, and are nothing new. The downward trend has been under way ever since the early 1980s, when the US Federal Reserve under Paul Volcker raised interest rates aggressively and convinced investors that it was committed to beating inflation.

Lower inflation expectations directly feed through to lower bond yields, as they mean that investors expect their coupon payments to hold on to more of their value. As inflation was steadily vanquished, the yields that investors demanded continued to fall. The steady downward trend in US Treasury yields is one of the most lasting and reliable phenomena in finance; scarcely anyone trading bonds today can remember a time when yields were not trending downwards.

But lower inflation also tends to overlap with sluggish economic growth. The fear of those who believe that lower yields have been driven by economic factors is that the overhang of debt from the crisis has now left the economy in a state of secular stagnation. Under those conditions, money holds its value, alternative investments have little appeal (as there is so little growth) and investors might as well pile further into bonds. The solution is to try to stimulate growth — with many now advocating hefty investment in infrastructure — and to try to spark inflation again, which central banks have tried to do with very easy monetary policy.

A rival and very popular theory applies to the shorter term, and pins the blame on precisely this monetary policy by central banks. Having already cut rates virtually to zero, they have attempted to push inflation up by buying bonds, a policy known as quantitative easing or QE. The purpose of the exercise is to reduce their yield, so it is obviously a factor. Money is fungible, and will find its way to wherever a decent yield can be found. This means that even though the Fed stopped adding to its pile of bonds almost two years ago, the money being spent by the Bank of Japan and European Central Bank, still aggressively buying bonds, has found its way into lower US yields.

So in the short term, central banks have contributed to lower yields. But the phenomenon of reducing yields far predates the financial crisis.

This leads to a third broad explanation, which concerns demographics. The populations of the developed world are ageing, as the postwar baby boom generation reaches retirement. Lives are lived for longer, while fertility rates have fallen.

That means that the number of people working steadily declines, pushing down on growth and hence on interest rates. Meanwhile, once in retirement, pensioners tend to buy bonds (typically through an annuity that pays out a guaranteed income), or at least steadily sell off the stock portfolios they have built up over their lifetime.

A report from economists at the Fed this month suggested that shifting demographics in the US alone could explain a decline of 1.25 percentage points in the natural growth rate of the US economy since 1980. What is most alarming about this theory, which explains events before and after the financial crisis, is that there is no obvious solution. The world has to wait for demographics to improve, which will take more than a decade.

One final difficult but more technical issue concerns pensions. Increasing longevity has naturally put pension funds under stress, and regulators in several countries have responded by requiring pension managers to buy more bonds, so that the assets in their funds match the liabilities that they will eventually have to pay out in income to pensioners. That means more buying of bonds. As more pension funds adopt this approach, more bonds are bought and yields fall further. There is a danger of a vicious circle.

This matters. Lower yields mean that credit is not rationed efficiently. This arguably harms capitalism’s process of “creative destruction”, where companies that would otherwise have been forced out of business are able to survive in weakened form thanks to low interest rates, while capital is withheld from potentially more profitable recipients. 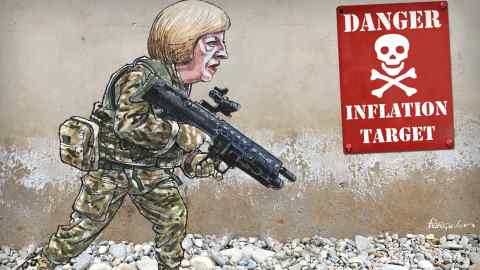 At a more practical level, they make it far harder for pension plans to meet their obligations to their members as baby boomers retire, and raise the prospect that corporate and public resources are diverted from investment and towards filling pension gaps. In extremis, it could also have the disastrous consequence for society that many people in retirement lose some or all of their income.

Is a steady rise in yields likely?

So a steady rise in yields might be greatly welcomed. But can such a rise be steady? Any move will have to be refracted through the world’s busy capital markets. Whenever there has been a hint that rates are about to rise — most notably in the spring of 2013, when the Fed started talking about “tapering off” its bond purchases — there has been a tendency for yields to rise very fast. That incident, which was known as the “taper tantrum”, caused yields of the least financially strong emerging markets to rise swiftly, and briefly provoked concerns that a new financial crisis was starting.

Regulatory reforms have caused many banks to withdraw from making a market in bonds themselves, which means that they do not hold an inventory of bonds to keep the market liquid in the event of heavy selling. And central banks already hold many bonds and keep them out of circulation, meaning that the effect on prices in what remains of the market could be magnified.

A sharp and disorderly rise in yields would help pension fund managers, but could signal deep dangers elsewhere. Many companies and countries have taken the opportunity to borrow at low yields. A sudden increase in yields would raise the risk of bankruptcies and renewed financial crises.

Get alerts on Pensions industry when a new story is published