Hiroto Saikawa approved a 10-year employment contract for Mr Ghosn as “chairman emeritus”, according to the 2012 document seen by the Financial Times, which also permitted him continued use of company properties in Rio de Janeiro, Paris and Lebanon.

Under the agreement, Nissan was expected to make a lump-sum payment of $40m for the advisory role after Mr Ghosn stepped down as chairman, and provide an annual salary of $4.4m which would be increased to $6m if the company met certain targets.

Mr Ghosn would also be entitled to use residential properties as well as offices in Japan and other locations.

The Ghosn family has always believed that the residences were corporate housing and there was no misuse of funds, according to people familiar with their thinking.

The employment agreement was signed by Mr Saikawa and Greg Kelly, another Nissan board member who was charged with conspiring with Mr Ghosn to falsify Nissan’s financial statements. Mr Kelly has denied the charges. It is not clear if the document was the final version of the agreement.

Mr Ghosn was arrested on November 19 and later charged with falsifying his pay in financial documents by not including more than $80m in deferred compensation that he was set to receive over an eight-year period. On his deferred compensation, the former chairman has said there was no undisclosed binding contract with Nissan for a fixed amount of pay. He has also denied all other charges.

Japanese newspaper Asahi reported in December that Mr Saikawa had signed a document listing the pretext for the deferred payment under question, but this is the first time the details of the document have come to light. 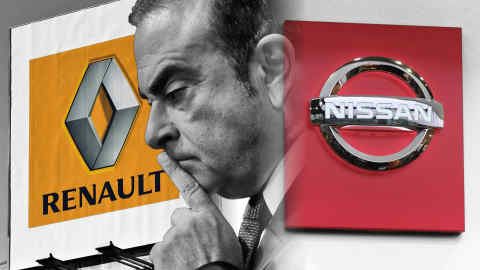 With the trial of Mr Ghosn set to unfold in Tokyo this year, the employment document has increased concerns among some senior Nissan executives that Mr Saikawa’s continued leadership of the carmaker will be seen as a failure to make a break from the past.

Later this week, a panel of external experts commissioned by Nissan is expected to recommend an overhaul of the carmaker’s board with a majority of directors to be made up of external appointments. But people with knowledge of the deliberations say Mr Saikawa is expected to remain as chief executive.

In recent interviews, Mr Saikawa has also indicated that he may stay in his post longer as he leads negotiations with Renault, Nissan’s French partner, to rebuild their alliance.

Mr Saikawa has admitted to prosecutors that he signed the document regarding Mr Ghosn’s deferred payment “without thinking too deeply”, according to a recent report from Kyodo, the Japanese news agency.

But it remains unclear whether Mr Saikawa knew that payments for the role of chairman emeritus were connected to what prosecutors have alleged was Mr Ghosn’s undeclared deferred pay.