‘Manbassadors’: Male MBAs aim to put an end to sexism at work

The Sir John Balcombe, a traditional London pub noted in online reviews for “its British food and real ales”, is not the obvious venue for a business school student society looking to promote role models for gender equality.

Harish Patel, an MBA student at London Business School, who refers to the waitress as “love” when ordering food, may seem the wrong person to be leading the charge of a feminist movement.

There is a lot that is counterintuitive about Manbassadors, the group Mr Patel co-founded with the backing of LBS’s Women in Business club. It is a male-led drive to support the cause of female executives.

Mr Patel felt he had to act after seeing his sister struggle in her career after maternity leave.

“The hoops she had to jump through just to agree to have some time off to cover childcare, it just didn’t seem fair,” he says. His hope is that such barriers are removed by the time his young niece enters the workforce.

Our approach has been to educate men across the broad spectrum of viewpoints an MBA class can offer, ranging from folks that are disinterested to self-identified feminists

There is a near-perfect balance of the sexes around the table at the Sir John Balcombe, where six men and seven women are locked in discussions over beer.

Among them is André Moscoso, who before his MBA worked in banking in Guatemala, his homeland, and in Costa Rica. He claims he came along after encouragement from two female friends who worked for UN Women, the United Nations entity for gender equality.

“I had never thought about this before talking to them,” he says. “I had to do something.”

Joining Manbassadors is a first step, Mr Moscoso says, adding that he would like to do more after graduation wherever he works.

The LBS Manbassadors group runs events ranging from the pub gathering to those where guest speakers can address a lecture hall full of students on an aspect of gender equality.

There are plans for skills workshops, conducted by faculty staff or outside human resources specialists, covering issues such as recognising and avoiding implicit sexual bias in performance management reviews, says Mr Patel.

“Our approach has been to host activities and educate men across the broad spectrum of viewpoints that an MBA class can offer, ranging from folks that are disinterested to self-identified feminists,” he says.

Those who have expressed an interest so far have been asked to take a pledge to commit to “proactively engage” in conversations about gender differences with fellow students on campus.

“The idea was to ask students not just to be added to a mailing list or show their support, but rather pledge to be an active participant in gender discussions,” Mr Patel says, adding that the group has gathered more than 350 signatures.

LBS is not the only business school to organise a male-led female advocacy group. Ten, including groups formed at Harvard Business School, Wharton and Columbia Business School, have joined an initiative named Men as Allies to push for better education for male students about gender equality. 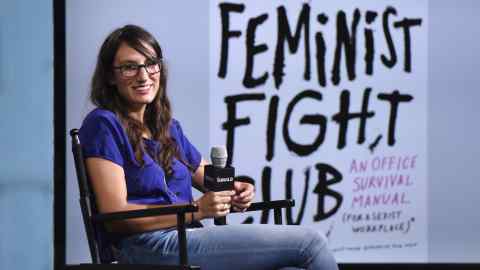 Men as Allies is co-ordinated by the Forté Foundation, a non-profit consortium of multinational companies and business schools that lobbies for greater opportunities for women.

Business school campuses, most of which are dominated by male students, have a lot of progress to make. Women account for 35 per cent of all MBA students at the world’s top 100 schools, according to the latest ranking survey by the Financial Times

The balance has improved only marginally since the FT survey in 2006, when 29 per cent of MBA students were women.

Elissa Sangster, Forté’s executive director, claims that there has been a “surge of interest” among men in getting involved in gender equality issues on campuses.

“Many men have felt like outsiders and did not know how to get involved,” Ms Sangster says. “Our initiative sheds light on what male MBA students can do to enhance diversity on campus, which will create a positive ripple effect both at school and when they return to the business world.”

Business schools have become more gender balanced since Forté was formed in 2001, Ms Sangster says. Back then 28 per cent of member school students were women, while today it is 36 per cent, she adds.

For women, the major deterrent to applying to business school is cost. Some scholarships are ringfenced for female applicants. Ms Sangster’s organisation operates one such scheme, called Forté Fellows, which every year gives 1,100 female MBA students about $20,000 each towards their fees at 50 partner business schools.

“Women are risk-averse when it comes to investing in themselves,” Ms Sangster says. “It is less about the perceived value of business education and more about taking time away from their current commitments, forgoing a pay cheque, and the prospect of returning to school full-time.”

Iseult Finn is one of the female founders of the Manbassadors group at LBS with Mr Patel. She started her MBA to switch careers, having qualified as a surgeon. She is keen to get into consulting. One of the reasons she wanted to move out of medicine was the sexism she experienced in operating theatres.

“People would say this doesn’t even exist, it is the same for men and women. I would strongly disagree with that,” Ms Finn says.

Mr Patel admits that there is a lot of work to do to change attitudes, but that business schools are important places to start because they are likely to be training the people who will be leading companies.

“These skills, these learnings and experiences may well come out to be valuable in 15 or 20 years,” Mr Patel says. “It’s not something that will necessarily happen overnight.”