After a decades-long renaissance, worrying signs are emerging for Britain’s motor industry

In the global electric car race, Britain is struggling to keep up with its rivals.

Fresh investment is dwindling as manufacturers prioritise their home markets to develop new technology, other governments are making bigger promises to attract business and Brexit uncertainty is eroding Britain’s long-held role as the springboard to the rest of Europe.

Carmaking in Britain has enjoyed a decades-long renaissance after heavy investment from manufacturers such as Honda, Nissan and Toyota of Japan and Germany’s BMW. But as the sector transitions from the internal combustion engine to electric power its future in the UK appears uncertain.

This was highlighted last month when Honda announced the closure of its car assembly plant in Swindon to focus on making electric cars in Japan.

“The [UK’s] auto sector has been successful but we cannot take it for granted,” business secretary Greg Clark told the Financial Times. “If we are to be successful in automotive we have to double down on new technology, in particular in electric.”

There are some grounds for optimism.

Britain builds the Nissan Leaf — the best-selling electric car in Europe — with imported battery cells from Japan packed together into larger packs at a Sunderland site and used in the neighbouring car assembly plant.

Jaguar Land Rover in January announced investment into a battery site at Hams Hall that will produce hybrid and pure-electric systems for its cars, while Aston Martin has stated an ambition to produce the batteries for its luxury Lagonda vehicles in the UK.

Williams, the engineering arm of the Formula One racing team, and Unipart, the supplier, have invested in a new joint battery facility in Britain.

Other work is springing up as a result of government incentives. A battery innovation centre, part-funded by £80m of government money, is planned in Coventry that will help businesses bring their electric technology from research phase to scalable production. Plans to open the site last week were delayed by Brexit. Even once open, however, the site will not be a manufacturing centre.

And the government’s industrial strategy, set out in 2017, proposed measures to attract a wave of electric investments — including £246m of funding to attract battery technology.

But demand for battery cars remains modest, with less than 1 per cent of global sales from pure electric models. Carmakers therefore want to consolidate all their expertise in one place to save costs, and this is often in their home market. The UK is feeling the effects.

BMW has said that while it will assemble the electric version of its Mini in its Oxford plant, the batteries will be shipped from Germany.

Similarly, Vauxhall’s French owner PSA will import hybrid systems from France to its plant in Luton when it begins making partial-electric vans at the site. Key electric parts of Toyota’s hybrid cars are shipped from Japan, its home market, and Honda’s decision to close its Swindon plant further shortens the list of potential battery car producers in the UK.

The closure “was a very big kicking for the government’s industrial strategy which was about electrification”, said David Bailey, professor of industrial strategy at Aston University. “Honda is basically saying the UK won’t be an attractive place for electric vehicle [production].”

Even after demand for electric vehicles takes off, carmakers are likely to establish larger regional battery plants to serve multiple car factories, rather than opening dedicated battery sites close to every assembly plant, to generate economies of scale.

How Brexit has stalled investment

Also working against Britain’s chances of attracting investment is its departure from the EU.

“Everyone is focused on Brexit, and understandably so, but [electric cars] are the sort of issues we should be focusing on,” said Mike Hawes, chief executive of the Society of Motor Manufacturers and Traders, an industry body.

“Brexit gives people a reason not to invest in the UK. The lead is being taken elsewhere, because they’re not hamstrung by Brexit.”

Investment into the UK sector — both in traditional petrol or diesel-driving cars and in electric technology — has fallen 80 per cent since 2016, the year of the Brexit referendum, SMMT figures show.

Mr Clark predicted that spending in the UK would bounce back once investors received clarity over the future trading relationship with Europe.

“There are a lot of investments that have been put on hold pending the resolution of Brexit,” he said. “I am very confident that if we do resolve Brexit successfully within the next few weeks, the rest of 2019 we will see some pent-up investment being made . . . including some substantial and eye-catching ones.”

Even if that proves correct, Britain will have to contend with other nations racing to attract battery investment. France, for example, has pledged to invest €2.5bn over 10 years. 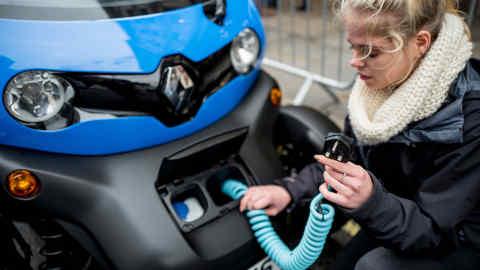 Europe is already ahead of Britain when it comes to building a supply chain for one of the key components for lithium-based batteries, chemicals called cathode materials.

The German chemicals group BASF is constructing a plant in Finland that could supply up to 300,000 electric cars a year, while its Belgian rival Umicore plans to open a cathode materials site in Poland.

Others are even further ahead, with US electric car maker Tesla and battery group Panasonic jointly constructing a $4bn battery plant — which Tesla chief executive Elon Musk dubbed the first “gigafactory”. China, meanwhile, is opening dozens of super-scale battery plants.

“The UK seems to me to be way behind the curve in terms of industry development,” said Ian Henry, who leads consultancy AutoAnalysis. “Why the UK government thinks it can steal a march on these major players is beyond me.”