Joe Miller in New York and Joshua Oliver in London

Two of FTX founder Sam Bankman-Fried’s closest associates have pleaded guilty to fraud and agreed to co-operate with US authorities investigating the collapse of the bankrupt cryptocurrency exchange, a federal prosecutor in Manhattan said on Wednesday.

Damian Williams, the US attorney for the Southern District of New York, announced the guilty pleas and criminal charges against Caroline Ellison, former chief executive of FTX trading affiliate Alameda Research, and Zixiao “Gary” Wang, a co-founder of FTX, in a short video statement. His office had brought eight charges against Bankman-Fried last week.

The announcement from Williams came just after a plane carrying Bankman-Fried took off from the Bahamas, where he waived his right to challenge extradition to the US. He landed in New York late on Wednesday, local media reported, and is due to appear in a Manhattan court as soon as Thursday, where his bail request will be considered.

The trio of longtime friends were among the key members of a tight circle of associates who ran Bankman-Fried’s crypto empire, which included the FTX cryptocurrency exchanges and Alameda Research, the private trading firm. All three had lived together with other senior executives in a luxury apartment in Nassau’s Albany complex.

The documents said prosecutors would not oppose bail requests from both defendants under certain conditions, including posting a bond and handing in their travel documents, as they awaited formal sentencing.

Separately, the Securities and Exchange Commission and the Commodity Futures Trading Commission filed civil lawsuits against 28-year-old Ellison and 29-year-old Wang, accusing them of fraud.

As chief executive of the FTX trading affiliate, Ellison “used FTX’s customer assets to pay Alameda’s debts” and diverted billions of dollars of depositors’ money to the company to fill a hole caused by a crypto market crash in May, the SEC’s complaint alleges.

The CFTC said Wang had a hand in creating some of the algorithms that underpinned FTX, which allowed Alameda “to maintain an essentially unlimited line of credit” on the exchange, giving it an “unfair advantage” over regular depositors.

Sam Bankman-Fried
‘Fraud in shorts and T-shirts’: the case against the FTX founder 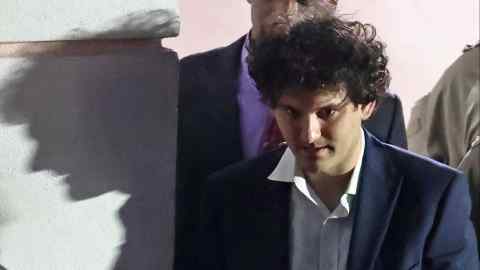 Both defendants were co-operating with the SEC, the agency said. The CFTC said they were not contesting their liability.

A lawyer for Wang, Ilan Graff, said: “Gary has accepted responsibility for his actions and takes seriously his obligations as a co-operating witness.” Lawyers for Ellison did not immediately respond to requests for comment.

Alameda, the trading firm launched in 2017, played a key role in the events leading to FTX’s collapse and the allegations against its senior executives.

Bankman-Fried, Wang and Ellison were among the earliest employees of the trading firm. Over time, the firm shifted from relatively safe arbitrage strategies to increasingly risky bets on crypto tokens and companies, funded in part with borrowed money.

After launching FTX, Bankman-Fried and Wang formally relinquished their roles at Alameda to avoid the appearance of conflict of interest between the firms. US authorities allege they remained closely involved with Alameda.

The SEC claims that Ellison and Bankman-Fried “schemed to manipulate the price of FTT”, a crypto token issued by FTX. Alameda had taken out large loans underpinned with FTT, so a collapse of the price of the token threatened to wipe out the trading firm.

SEC chair Gary Gensler said that artificially supporting the price served “to prop up the value of their house of cards”.

The US Department of Justice last week filed charges against Bankman-Fried and accused him of orchestrating “one of the biggest financial frauds in American history” by misappropriating customer assets from FTX to Alameda Research. He was arrested in the Bahamas, where he lives. He is also facing parallel civil cases from the SEC and CFTC.

Bankman-Fried stepped down as chief executive of FTX as it filed for Chapter 11 bankruptcy last month. A representative for Bankman-Fried declined to comment.

Williams reiterated his call for others who worked with Bankman-Fried to come forward. “If you participated in misconduct at FTX or Alameda, now is the time to get ahead of it,” he said. “We are moving quickly and our patience is not eternal.”