In August, Brazil’s Senate voted to impeach president Dilma Rousseff, bringing to an end almost 14 years of rule by the leftist Workers’ party. Analysts have blamed the administration for deepening the country’s worst recession on record — which followed a crash in the value of commodity exports — and stunting the growth of the country’s capital markets.

Taking Ms Rousseff’s place, President Michel Temer has appointed some of the market’s most respected figures to run the finance ministry and Brazil’s state-controlled companies, setting the country up for what Mr Pinto hopes will be “a shock of capitalism”.

“The economic team put together by today’s government is a dream team . . . they are music to the market’s ears,” says Mr Pinto.

Over the past few years, Brazil’s capital markets have borne the brunt of the country’s multiple predicaments. The revelation of a vast bribery and kickback scheme at the state oil producer, Petrobras, one of Brazil’s largest listed companies, disrupted the stock market and prevented any Brazilian company from issuing debt internationally for months. Meanwhile, government interventionism and, in particular, a financial transactions tax scared away investors and moved trades offshore.

As investors left the market and the economy slumped from 7.5 per cent growth in 2010 to its deepest recession on record, it became nearly impossible for new companies to float shares.

“There is a lot of pent-up demand for public offerings — over the past three years we only saw two small operations,” says Mr Pinto.

“Brazil was in such a bad [place and] the companies’ prices were so low that it was better to hold out and wait,” he says. “But now that Brazil is turning the page, the companies are coming back and making inquiries,” he says, adding that about 60 companies have registered their interest in holding public offers.

However, while Brazil’s new government has raised investors’ hopes, the economic recovery will depend on Mr Temer’s ability to push through fiscal measures to control public spending that ballooned under the Workers’ party, costing Brazil its investment-grade credit rating.

The government has proposed two main reforms: establishing a public spending cap and reforming pensions. Most analysts expect the cap, a constitutional amendment that will eliminate real increases in budget spending for up to 20 years, to be passed by the end of the year with only minimal changes to the original proposal. In November the government is set to propose ambitious reforms to Brazil’s generous pension system, introducing a minimum retirement age and delinking benefits from the minimum wage.

While unpopular pension reforms will be much harder to pass, the fact the government is trying to make meaningful spending cuts has already boosted investor confidence, says Mr Pinto.

“They are long-term measures but they completely change people’s expectations and not just local businessmen but foreign investors too,” he says. “This is what we need in Brazil — to change expectations.” 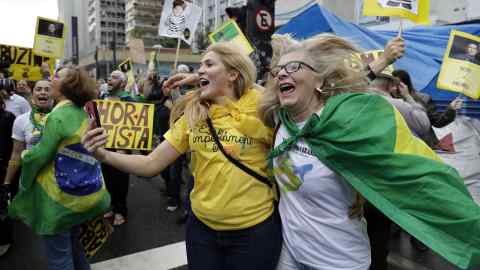 But Brazil’s economic and political crisis has not stopped BM&FBovespa’s aggressive expansion in Latin America, says Mr Pinto. “Our competitors are not local but global . . . we needed to create the infrastructure to strengthen ourselves and compete in a global way,” he says, pointing to BM&FBovespa’s recent acquisition of Cetip, the country’s largest clearing house.

After years of speculation over a possible deal and two failed bids, in April BM&FBovespa announced it would take over Cetip in a deal valued at almost R$12bn ($3.7bn). Once approved by regulators, the acquisition will increase BM&FBovespa’s dominance in Brazil, allowing the operator to control depositary and clearing activities for all types of financial assets.

Meanwhile, BM&FBovespa has been pursuing an ambitious plan to purchase minority stakes in Latin America’s largest bourses. “In Argentina, Chile, Peru and Colombia, you have large companies and pension funds but they are trading in New York, London and Asia . . . we need to find a way to make them use Latin America,” says Mr Pinto.

The São Paulo-based group has already bought stakes in the exchanges of Chile, Mexico and Colombia and expects to complete purchases in Argentina and Peru by the end of the year, he says. BM&FBovespa aims to gain a seat on the board of each bourse, allowing it to work with each country on ways to integrate the region’s markets further. “We have to unite because together we can do so much more,” says Mr Pinto. “What is the point of fighting by ourselves in a globalised world?”