We use cookies (opens in new window) for a number of reasons, such as keeping FT Sites reliable and secure, personalising content and ads, providing social media features and to analyse how our Sites are used.
Manage cookies
Accept & continue
UK trade

Theresa May’s vision of Britain’s trading relationship with the EU has left trade officials and business executives scratching their heads about how it could work in practice.

The British prime minister has confirmed the UK will leave the EU single market but seek market access for certain industries such as cars and aerospace.

She also confirmed that Britain would pull out of the EU customs union, but retain a “customs agreement” to remove tariffs and have “frictionless trade”.

Trade experts suggested that it will be very difficult for a sector-specific customs union to be technically, legally and politically achievable.

“Every time you try to think about one or two of these pillars, you crash into the third one,” says Samuel Lowe, a London-based trade analyst.

The legal question is probably the easiest to address. In theory, World Trade Organisation rules prohibit bilateral or regional agreements that do not cover “all the trade”. In practice, no WTO member country has sought to block an agreement by another in case they face retaliation.

“Everyone is clustered in glass houses and no one wants to be the first to chuck a brick,” said a Geneva trade official.

The technical obstacles are trickier. The defining feature of a customs union is a common external tariff against other economies. This means goods can circulate freely through the union without the need for customs checks, including for “rules of origin” that prevent one country becoming a low-tariff back door to the others. The closest existing example of a tailored customs union is Turkey’s deal with the EU, but that covers all industrial goods, not just a few sectors.

A limited arrangement will run into the thorny problem of where to draw the boundaries of a sector. British suppliers to the motor industry, for example, will agitate to be counted inside to prevent their components being subject to bureaucracy. 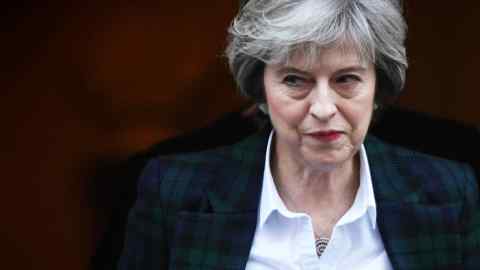 A customs union, particularly a partial one, also does not necessarily remove all paperwork. Allie Renison, head of Europe and trade policy at the UK Institute of Directors, noted that Turkish exporters still have to fill in origin-of-product certificates.

Any friction in cross-border trade will damage the just-in-time production and disaggregated supply chains of the car and aerospace industries.

Britain could also try to mitigate the effects through signing a mutual recognition agreement with the EU to accept each other’s regulatory arrangements.

Directors from several UK-based car manufacturers expressed private concerns that any degree of border scrutiny will place enormous power in the hands of port officials and security guards, who have the ability to hold up delivery of goods on technicalities.

“The French would inspect goods going back and forwards because they can,” said one senior executive in the British car industry.

David Davis, UK secretary of state for leaving the EU, admitted he cannot not rule out British lorries having to face customs checks.

Finally, it is the political objections on which the idea of a piecemeal customs union is most likely to founder. One senior EU diplomat at the heart of talks says the probable division between EU member states means a sector-by-sector arrangement “would never fly”.

An attempt to pick apart the single market or customs union would stir obstructionist politics in countries with other important industries left out of arrangements. “If you include cars, what about countries with food processing or textiles?” the diplomat said.

The most likely outcome is that Britain opts instead for a broad so-called free-trade agreement with the EU, in which it could cut tariffs to zero but would still have to make customs and rules-of-origin checks.

Mrs May’s vagueness during her speech last week may well have been politically prudent. To have definitively stated her desire for a sector-by-sector customs union would have meant a public commitment to a deal that is likely to be technically highly challenging and politically beyond reach.