The 280-page report — published almost three decades after Japan legally recognised death driven by overwork, known as karoshi — acknowledged that its contents made for bleak reading.

The white paper, which was forced into existence by a 2014 private member’s bill obliging the government take responsibility for preventing deaths and suicide through overwork, follows a year in which karoshi compensation claims surged to a record high of 1,456.

Even then, say lawyers who have represented the families of victims, the issue is greatly understated and barely discussed. The survey had hoped to base its research on responses from 10,000 Japanese companies; in fact, it received replies from just 1,743. 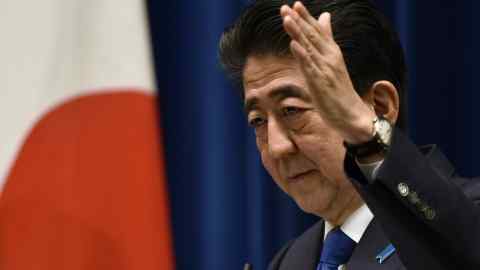 Government efforts have yet to bite, say labour groups. Gentle slogans urging armies of reluctant salarymen “let’s work shorter hours”, or more practical measures such as turning office lights out at 7pm, are making no visible dent in a work culture that has devised few mechanisms for evaluating achievement beyond simply counting the hours worked.

The fundamental problem, said Koichi Nakano, a political scholar at Tokyo’s Sophia University, is that neither the government nor the business sector is especially keen to inform workers of their rights and to uphold them.

“At the heart of the issue is a deeply unenlightened but persistent attitude on the part of the government and management that regards selfless dedication to the company shown through long hours at the office as a prime virtue . . . in reality it is arguably responsible for the steady decline of the Japanese corporate competitiveness,” said Prof Nakano.

Reported karoshi deaths in the 2015 financial year ending in March, published by the labour ministry in April, were concentrated on sectors such as social services and construction. These are on the front lines of Japan’s chronic labour shortage — itself a slow-burning crisis that derives from the country’s long-term demographic decline and historic resistance to large-scale immigration.

The survey underlying the new white paper found 44 per cent of IT companies admitted that some of their employees worked more than 80 hours of overtime a month.

But the problem is more widespread. The publication of the white paper came just a week after a Tokyo labour standards office ruled that the suicide of young graduate recruit at the Dentsu advertising agency had been a case of karoshi. The family of Matsuri Takahashi, 24, said she took her life after racking up 105 hours of monthly overtime. She had worked in Dentsu’s digital advertising division — the unit at the centre of a developing scandal that involved overcharging clients, and which Dentsu blamed on staff shortages.

Across the full- and part-time workforce, the average hours worked by individuals are falling very slightly, said the white paper, but that includes the rising cohorts of part time workers.

Among full-time staffers, on whom karoshi-generating pressures fall most heavily, approximately 21 per cent of Japanese work an average of at least 49 or more hours a week — far above the 12.5 per cent and 16 per cent rates reported in Britain and the US respectively.