How to robot-proof your children’s careers

Pity school careers advisers. If economists are to be believed, vast numbers of jobs will have evaporated by the time today’s pupils reach the labour market. Oxford university’s Carl Benedikt Frey and Michael Osborne say almost half of the jobs in the US are at high risk from computerisation in the next two decades, together with two-thirds of those in India and three-quarters in China.

While workers worry about whether robots will take their jobs, teachers are wondering how to use education to insulate the next generation from such a fate. This has worked before. When the last wave of automation swept the developed world at the start of the 20th century, policymakers decided education was the answer. If machines were going to substitute for brawn, they reasoned, more people would need to use their brains.

The US invested heavily in education, with good results. Workers reaped the benefits through better jobs and higher wages. Economists Andrew McAfee and Erik Brynjolfsson summed it up like this: “The industrial revolution started a race between technology and education — and, for most of the 20th century, humans won that race.”

But the next race will be against technology that replaces brains and brawn. Machine learning algorithms are already starting to supplant the likes of mergers and acquisition bankers and currency traders. Some experts argue we need to respond with another fundamental rethink of education.

“School education has tended to focus on developing the core cognitive competences — for example, reading, writing and arithmetic,” said Andy Haldane, the Bank of England’s chief economist, in a recent speech. “Smart machines have long since surpassed humans in their ability to do the first and third of these. And they are fast catching-up on the second. That begs the question of whether there are other skills where humans’ comparative advantage is greater.”

So what skills should we teach our children to robot-proof their careers?

How to be creative

Artificial intelligence tends to solve problems methodically but the human brain is far better at making logical leaps of imagination. It is more intuitive, creative and better at persuasion. Humans can also combine their creativity with robot-surpassing dexterity to cut someone’s hair, for example, or cook a delicious meal. “It’s good to invest in creative education because these are some of the skills that should be left [after automation],” says Stian Westlake, head of policy and research at Nesta, the UK innovation charity.

Artificial intelligence
Financial survival in the era of automation 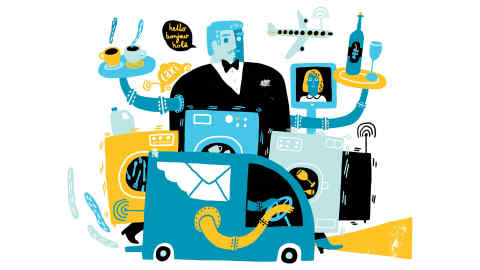 When you start to look at the world like this, you turn some familiar tropes about global education on their head.

Mr Westlake says: “It’s a paradoxical story where countries like the UK come out well, because our creative economy is quite strong. We beat ourselves up over our inability to be as good at Singapore and Shanghai at coding and things like this, but actually it turns out it’s quite possible that sort of stuff is going to be the stuff that’s very easy for artificial intelligence to automate.”

How to be nice

Some machines may have learnt how to seem caring but humans still have an unsurpassed ability to empathise with others. The new phrase is “EQ”, which stands for emotional quotient (or emotional intelligence). “The high-skill, high-pay jobs of the future may involve skills better measured by EQs than IQs, by jobs creating social as much as financial value,” the BOE’s Mr Haldane said.

Whether or not such skills can be taught is an open question. Still, some organisations are giving it a go. ING, the Dutch bank, has recently put 350 staff through an “EQ training programme”. The aim is to teach these bankers how to “build trust with the client through asking lots more questions and listening out for feelings and beliefs as opposed to just listening out for content,” explains Steve Ellis, director at Rogensi, a consultancy that developed the project with ING.

One of the exercises involves sitting bankers in a room, showing them pictures of people’s facial expressions and asking them to identify the emotion felt. Mark Pieter de Boer, head of financial market sales at ING, admits some bankers were initially resistant. “Typically, what you see is people who are very much IQ-focused struggle with making that change.”

But he says enthusiasm increased when staff saw the training had results. A survey by the company found people who had been on the course were more motivated, there was greater collaboration between departments and productivity increased by 10 per cent.

Even if the promised age of artificial intelligence does arrive, experts say we cannot afford to dispense with hard cognitive skills such as reading, writing and mathematics.

As companies and consumers wake up to the cyber threat, will they want to spend more on defending themselves?

Daisy Christodoulou, research and development manager at the UK’s Ark Schools chain, says that, unless we have these foundations in place, we will not have the mental frameworks to solve higher-order problems creatively.

“Even if we do arrive at a point where most work is done by computers, cognitive skills will still matter — not for the economy, but for the successful functioning of a democratic society,” she says. “In such a society, a great deal will turn on the ownership and regulation of the computers and robots doing all the work, and the debates around such issues will require an educated and informed populace.”