For those who spend a lot of their time between the jewellery boutiques and the haute couture stores of Tokyo’s Ginza district, a new joke suggests an easy way to tell local Japanese from the Chinese tourists.

Both types will rendezvous with their friends and family under the imposing portico of Mitsukoshi — Ginza’s most famous department store and meeting spot. The Chinese, by recent tradition, will rush inside and buy a Bottega Veneta handbag for ¥300,000 ($2,900). The Japanese will rush across the road to Doutor, a thrifty coffee shop, and buy a latte for ¥300.

It is gallows humour that reveals a Japanese luxury goods industry in outward health, but also in a state of fundamental transformation.

On paper, things could not be better. Between 2010 and 2015, according to data from Euromonitor International, the value (in 2015 dollar terms) of the Japanese luxury goods market jumped by almost 25 per cent from $20.9bn to $26.1bn. The growth was not quite as steep as the 52 per cent growth in China over the same period, but for a developed market, it was striking.

Beneath those figures, however, Japanese tastes in luxury, from jewellery and watches to handbags and headscarves, have been shifting towards value for money and low ostentation. Much of that is natural in an ageing population whose tastes have matured, and much of it is the effect of a generation of Japanese now in their 30s having grown up with 20 years of on-off deflation.

Chinese tourists, meanwhile, are not just arriving in Japan in record numbers, but on a scale that has smashed the government’s most bullish predictions: up 38 per cent to 3.8m in the year to July, according to the Japan National Tourism Organisation. Jin Weijun, a tourist from Dalian in north-east China, conforms to the stereotype of the Ginza Chinese tourist: he and his girlfriend have spent the past hour at Mitsukoshi comparing four pieces of Van Cleef & Arpels jewellery, all of them costing more than ¥1m each. “When all your friends know you are going to Tokyo, you have to come back with something that shows you spent money there,” says Mr Jin, a website designer.

That surge of arrivals and spending has been a consistent support for the last three and a half years of Prime Minister Shinzo Abe’s economic revival programme. Policies which caused the yen to weaken from ¥80 against the dollar in late 2012 to ¥125 in mid-2015 made Tokyo a particular magnet for luxury shoppers: at one point, and in defiance of conventional thinking, analysts calculated that a top-of-the-range Louis Vuitton bag was cheaper in Tokyo than in low-tax Hong Kong.

When you go to Tokyo, you have to come back with something that shows you spent money there

Moves to relax the visa application process for Chinese spurred things further, creating an unprecedented wave of customers for jewellery boutiques that had grown used to handling a trickle of browsers each day. The decision by Japan’s two main airlines, JAL and ANA, to offer double baggage allowance on economy-class flights from Chinese cities to Tokyo provided yet more incentive to cram bags with the highest-end goods that Japan could offer.

Wei Lijia is one of a growing number of Chinese who staff the luxury goods sales floors of department stores like Mitsukoshi and Takashimaya to ensure that Chinese tourists receive, in Mandarin and with subtle nods to their national taste, the impeccable service for which Japan is known.

“Luxury goods mean something different to Chinese and Japanese. They both understand quality and price, but for Japanese there is always this feeling that the actual purchase can wait. For the Chinese, there is this idea that if they don’t buy it now, it will be gone while they are thinking about it,” says Ms Wei.

In another symbol of Japan’s rapid adaptation to outsiders’ sense of glamour, the transport ministry has begun a study on whether it should encourage taxi companies to operate stretch limousines — vehicles that represent the very opposite of Japan’s lower-key approach to luxury.

The rise in tourist numbers has been felt nationwide, but especially so in Ginza, where even on a drizzly Tuesday night in September the pavements are thronged and Mandarin is the main language on the shop floors. 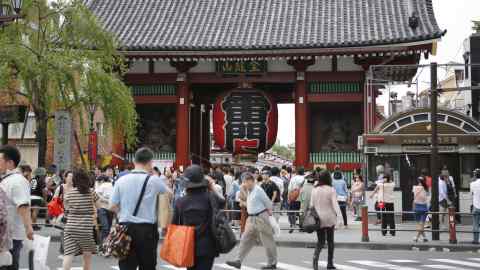 However, concern is rising over the sustainability of the boom. Discounting by US department stores, tumbling tourist flows in Europe, especially Paris, and high double-digit falls in the once feverish markets of Hong Kong and Macau have cut growth expectations for the full year in 2016 to between 0 per cent and 2 per cent; in some cases, there may be contraction. In September, luxury conglomerate Richemont reported sales down 13 per cent in constant currencies in the five months to the end of August and stressed weakness in Hong Kong and Macau.

Bain & Co analysts, meanwhile, confirm Japan as the world’s top market for luxury growth, predicting between 5 per cent and 7 per cent growth.

The biggest source of risk, say analysts, remains the yen. July spending by tourists in Japan’s department stores was 20 per cent lower than the same month a year earlier. Over that 12 month period, not coincidentally, the yen strengthened by almost 20 per cent.