Business Book of the Year Award 2019 — the longlist

The pressing issue of how to handle fast-moving technological change looms over the longlist for this year’s Financial Times and McKinsey Business Book of the Year Award.

Sixteen titles will compete for the £30,000 prize, including a weighty history of capitalism, two books about subtle — and not-so-subtle — bias against women, and an account of how the financial crisis was contained by the policymakers who led the battle to save the global economy.

Four years after Martin Ford’s The Rise of the Robots became the first tech title to win the award, books analysing the impact of advances in artificial intelligence, digitisation and online communication stand out.

Shoshana Zuboff’s heavyweight The Age of Surveillance Capitalism attacks Google, Facebook, Microsoft and others for extracting our personal data and turning it to profitable ends, preying on behavioural weaknesses. John Thornhill described the book as “unmissable” in his January review for the FT.

Invisible Women by activist Caroline Criado Perez takes a different perspective on the use and abuse of data. She lays out how designers and developers have persistently excluded or downplayed women in the data sets they use, to dangerous effect.

Amy Webb’s The Big Nine examines the largest US and Chinese companies dominating the introduction of AI into our lives. She offers dystopian and more optimistic scenarios for how machines may develop — and how humans could influence their development.

That is a theme also picked up in Human Compatible, due to be published in October, in which AI researcher Stuart Russell suggests how humans could rethink the basis of this new technology so that machines conform to our goals, not vice versa.

Now in its 15th year, the award will go to the book that offers the “most compelling and enjoyable insight into modern business issues, including management, finance and economics”.

Judges will select up to six finalists and announce a shortlist on September 16. The prize will be awarded in New York on December 3. Runners-up will receive £10,000 each. John Carreyrou took last year’s award with Bad Blood, his gripping account of the rise and scandalous fall of blood-testing company Theranos and its founder Elizabeth Holmes.

This year’s longlist also includes books about the power of business to innovate and create beneficial change.

John Browne, former BP chief executive, makes a second appearance on the longlist (The Glass Closet was in the mix in 2014), with his distillation of historical, artistic, autobiographical and business lessons Make, Think, Imagine. Browne argues for the progressive force of engineering innovation to change the future for the better.

More polemical, but also strongly pro-capitalism, is Tyler Cowen’s Big Business, subtitled “A Love Letter to an American Anti-Hero”, in which the economist argues that large companies have been unfairly maligned.

Christopher Leonard’s Kochland, out this month, provides plenty of ammunition for the counterargument. The business reporter dives deep into the history of Koch Industries, the privately owned US conglomerate, and the implications of its quiet consolidation of economic and political power. (It is the second time the publicity-shy Koch brothers have been the subject of a book in the longlist: Daniel Schulman’s biography Sons of Wichita featured in 2014.)

Carrie Gracie turns the spotlight on to a quite different corporation — the BBC — in Equal, recounting her fight for equal pay for her and other women at the UK’s public broadcaster. The BBC’s former China editor sets her story, to be published next month, in the wider context of women’s long and continuing struggle for workplace equality.

The longlist offers rich pickings for students of the global economy. The Anxious Triumph, Donald Sassoon’s sweeping history of capitalism from 1860 to 1914, explores how the market economy moves forward despite its chronic instability. Reviewing it in the FT, fellow historian Harold James said the book looked back, but also forward “to modern globalisation and hyper-financialisation and today’s populist backlash”.

Ben Bernanke, former US Federal Reserve chairman, Henry Paulson, ex-Treasury secretary, and Tim Geithner, former president of the New York Fed, offer a succinct slice of more recent history in Firefighting, their instructive account of the steps they took to fend off economic collapse a decade ago.

Reporter Gregory Zuckerman adds a further piece to the record with his narrative biography of Jim Simons, the secretive founder of quant fund Renaissance Technologies, The Man Who Solved the Market .

Michael Shnayerson sheds fresh light on the genesis and growth of another investment market — for contemporary art — in Boom, which paints a picture of geniuses, cunning speculators, and credulous buyers as colourful as Zuckerman’s illustration of Wall Street.

Meanwhile, in The Third Pillar, Raghuram Rajan, another former central banker — and past prizewinner in 2010 for Fault Lines — holds up “community” as a balancing force offsetting market and state, in his broad prescription for reform of capitalism.

Economist Richard Davies shows what happens when the balance envisaged by Rajan collapses. In his Extreme Economies, published next month, Davies visits local economies pushed to the limit, from Aceh to Glasgow, and examines what their response to extreme pressure teaches about resilience in the face of climate change, demographic shifts, and state failure.

Finally, a brace of titles offers original and practical advice to managers. In Loonshots, Safi Bahcall tells rich tales of leadership, innovation and organisation. They illustrate his fresh take on the science of striking a balance between structure and free-flowing ideas to ensure the long-range “loonshots” of the title hit the target.

David Epstein takes issue with the cult of specialisation in Range, making the case for people who can move across many domains. He argues that in “wicked” learning environments, such as the complex and uncertain world many of us now inhabit, generalists can thrive. That sounds like the sort of advice the book award judges need as they survey this highly varied longlist.

Explore the series
READ MOREFT Business Book of the Year 2022
If you could only rescue one book, which would it be? 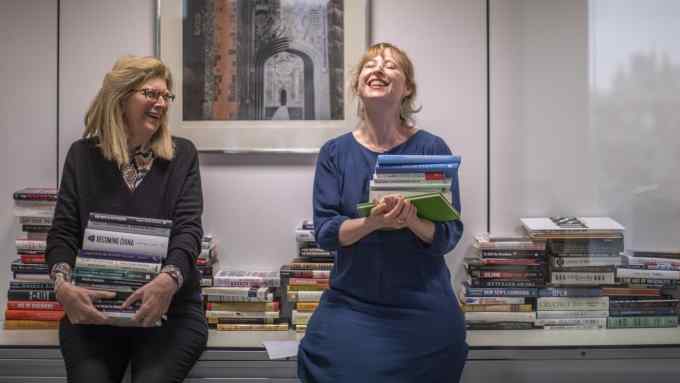