Are more women at the top good for banks?

When Royal Bank of Scotland confirmed last month that Alison Rose would be its next chief executive, my first reaction was “finally!”. As in, finally, a woman would have the chance to head one of the UK’s — and the world’s — biggest banks.

Although RBS fell out of the list of “global systemically important banks” last year, Ms Rose is the first woman to work her way up the ranks to become chief executive of a global bank of that nature. (Ana Botín has headed Spain’s Santander since 2014, but she, like three generations of her family before her, serves as executive chairman, with a chief executive below her.)

Yet what I am interested in is not just that a woman broke through another glass ceiling. Rather, it is that the sector is finally diversifying to the point where we might be able to tell whether adding women to top management and boards of directors makes any difference.

After a whole series of banks collapsed and took the world economy down with them in 2008, some regulators and industry critics argued that testosterone-fuelled risk-taking was to blame. Former EU competition commissioner Neelie Kroes and incoming European Central Bank president Christine Lagarde, among others, have publicly speculated that the 2008 crisis could have been averted had failed investment bank Lehman Brothers instead been Lehman Sisters.

Most industry leaders agree there is value in diversity. “Talent is fairly evenly distributed by gender, so if your top positions are heavily skewed by gender, you probably aren’t getting the ideal talent mix,” says Howard Davies, who chairs RBS.

But he adds that, having taught courses on risk management, he knows “the evidence in this area is particularly thin”. That could be addressed, he says, “by analysing risk committees — I think that would be a very good thing”. 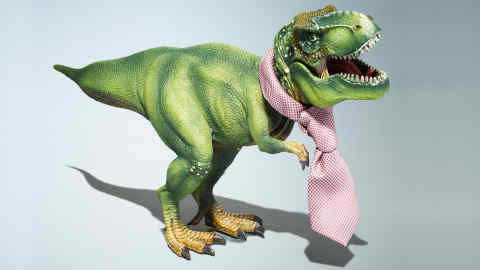 It is difficult, however, to find more than a weak correlation between gender diversity and good performance and governance. There is a well-known McKinsey study that found companies with a more diverse leadership tend to have higher profit margins, but it did not look specifically at finance. Sceptics rightly note that correlation is not causation — it could be that companies that are good already have the energy to devote to diversity programmes.

A 2008 study published in Evolution and Human Behavior, an academic journal, found a strong correlation between high levels of testosterone and financial risk-taking. Another study that same year tested traders’ saliva for the hormone. It found they made more money when they had higher levels, and concluded that the results were linked to increased risk tolerance and fearlessness.

If your top positions are heavily skewed by gender, you probably aren’t getting the ideal talent mix

More recently, a 2017 study by Elizabeth Sheedy of Macquarie University in Australia cast doubt on the whole theory. Surveys asking 36,000 employees at 10 banks about their risk-management behaviour found that women and men at senior levels had similar levels of risk tolerance and managed risk in similar ways. In fact, age mattered far more than gender, with older workers showing more willingness to question business practices that may create poor outcomes.

There is evidence that banks do better over the long haul when they have smaller boards with members who have experience in the financial sector and who are more willing to challenge management. But given the gender divide at the top of finance so far, that is not in itself a strong reason to put more women in charge.

None of the eight global systemically important US banks has ever been run by a woman. In Europe, Ms Rose brings the number of female chief executives currently running Europe’s 25 largest banks to three — Carina Akerstrom was appointed to run Svenska Handelsbanken earlier this year and Kjerstin Braathen took over at DNB in September.

It is also clear that two X chromosomes are not a complete remedy. In 2016, Swedbank, Sweden’s oldest bank, was one of the first big European banks to name a female chief executive. But Birgitte Bonnesen became embroiled in the bank’s €135bn money-laundering scandal, leading to her dismissal in March.

Yet Ms Rose’s appointment underscores that we may now be getting to the point where there will be enough data to move beyond saliva studies and anecdotes. A growing number of countries have adopted voluntary targets or even quotas for women on boards, and while banking lags behind many other industries, change is starting to filter through.

A Harvard Law School study completed before Ms Akerstrom and Ms Rose were promoted found that one-third of the board members at Europe’s 25 biggest banks were women, up from 15 per cent before the financial crisis. Authors Lisa Andersson and Stilpon Nestor also concluded there had been progress, albeit slower, on the executive side: 13 per cent of top management committee members were women, up from 9 per cent.

That suggests that we could begin to make meaningful comparisons between banks that have substantial numbers of female leaders and those that do not. Let us figure out whether their risk and remuneration committees are run differently.

Board minutes ought to reveal whether women are more or less likely to challenge management. We should then be able to link those results to banks’ performance in the long term.

The writer is the FT’s opinion and analysis editor