Tattoos bring a new form of body language to the office

“I don’t think it’s any more about making an aggressive countercultural statement,” says Hugo Varney, unrolling his shirt sleeve to display a large tattoo, which he got three years ago on his forearm.

In his case, it is most definitely not countercultural — the tattoo is a quotation from the Roman historian Livy: “Et facere et pati fortia Romanum est”, or “acting and suffering bravely is the attribute of a Roman”. It is inked in about 32 point and surrounded by a border to make it look like an inscription on a monument.

A generation ago, Mr Varney, 44, who read Classics at Oxford, would have been the last sort of person one might have expected to have a tattoo. He is a partner at Hutton Collins, a small private equity firm based in St James’s, one of the most exclusive areas of London. The hamburger chain Byron is among the companies it owns.

But times are changing. A YouGov poll last year found19 per cent of adults in the UK had a tattoo. In the US, 32 per cent of 18-44 year-olds have at least one.

Andrew Timming, a reader at the School of Management, University of St Andrews, specialises in researching tattoos in the workplace. He points out the days of tattoos only being seen on the arms of footballers, sailors or pop stars are long gone. Indeed, you are nearly as likely to see them on the bodies of bankers.

He says he believes there to be a “tidal wave” of tattoos hidden under the shirts of City workers. “There is a lot of psychological research that links — empirically — tattoos with risk-taking behaviours,” he says. “They tend to go hand in hand. And I’d expect a greater percentage of risk-takers in the City than other jobs.”

But the increasing prevalence of tattoos, especially among those below the age of 35, does not mean they are widely accepted in the office.

Tattoos are not a protected characteristic. It is legitimate to not give a job to someone because you don’t like their tattoos

Mr Timming’s research over the past few years, which showed that human resources managers were less likely to hire a person if they had a tattoo, was backed up last month by Acas, the conciliation service. Its small-scale survey of hiring managers found that visible tattoos were likely to severely restrict employment prospects.

Employers, including the regional director of an accounting firm, told the researchers they would be reluctant to hire people with visible tattoos in case clients and customers were put off. Companies are within their rights under employment law to not hire someone because they have a tattoo.

Jonathan Naylor, partner at Shoosmiths, the law firm, says while employers cannot discriminate against characteristics such as race or disability, “tattoos are not a protected characteristic. It is legitimate to not give a job to someone because you don’t like their tattoos.”

He adds that only weeks ago, a marketing firm asked for his advice on the topic after interviewing a woman with tattoos covering her arms.

“They said, ‘We really like this person, their skillset is ideal, but we’d like to know whether we can tell her to keep those tattoos covered when she’s meeting certain clients, such as banks’.”

He advised them they were free to insist on that before they offered her a job.

Very few companies have an explicit no-tattoo policy at work, but many have a dress code that uses phrases such as “dress professionally” or “business wear”, which is open to interpretation.

The airline industry is one of the few sectors which not only bans visible tattoos, but — in the case of British Airways — also gives instructions about wearing undergarments in order to prevent tattoos showing through a white shirt.

Those with tattoos who work in executive jobs, however, often enforce their own private dress code. Mr Varney says no one in his St James’s office would mind his Latin inscription, but adds: “I would think it should be covered up. I’d never go to meet a potential investee or management team with that exposed.”

His philosophy is echoed by Darren Harvey, 41, who runs his own quantitative research company Lotus Research.

He has a large lotus flower (the tattoo came before he chose the name for his company) spread across the width of his chest, clearly visible above the neckline of a T-shirt. Before he went ahead, however, he worked out how much people could see of his neck and the top of his chest if he had his top button undone on a work shirt — then he marked that point with a marker pen. “I said to the tattoo artist they couldn’t go any higher than that.”

He mostly works from home where the lotus flower is not an issue, but, “if I pitch for new business, I’d make sure I buttoned up my shirt. What you don’t want is the tattoos to distract from you. But once you’ve started working for people, it’s different. They can then judge you on your work.”

FT Magazine
‘I tattoo whatever I want on people’s arms’ 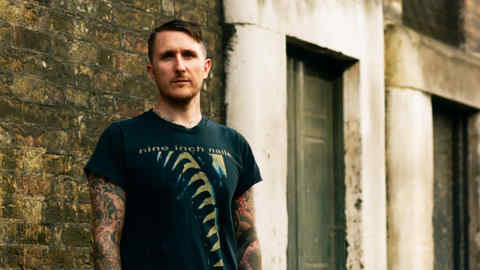 Many people in human resources, however, think companies need to ignore tattoos in the workplace. Jonny Gifford, research adviser for organisational behaviour at the Chartered Institute of Personnel and Development, says: “We’d say it really doesn’t matter. Get someone to do the job. We live in an age where tattoos are increasingly common, and the trend doesn’t show any signs of stopping, honestly — what’s the problem?” By refusing to hire those with visible tattoos employers are limiting their pool of talent, he argues.

He accepts that a spider’s web climbing up someone’s neck is probably going to be challenging for many conservative companies in the City. “If you are in a key client-facing role it might pose a problem. But if you aren’t in those kind of situations, it’s hard to see how excluding those people benefits the company.”

Jenifer Baxter, 39, head of energy and the environment at the Institution of Mechanical Engineers, has a tattoo of a large butterfly across the top of her left arm, and a dragonfly on her forearm, which runs down to just above her wrist. She says that after years of meticulously covering up these designs, she is now more relaxed about putting them on show at work. But if she is attending external meetings she is circumspect.

“In some situations, you have to accept you need to be more conservative in how you are dressed,” she says.

Ms Baxter’s flexible approach appears to be one a number of City companies are adopting, according to HR directors. Tattoos are fine, but you need to cover them up when meeting important or sensitive clients. Though how you define that is always going to be tricky.

“At the House of Commons or Lords, I’d probably cover myself up. I don’t want people to be distracted by my appearance,” Ms Baxter says, before laughing, “though I didn’t [cover up] when I recently met Jeremy Corbyn.”