If you think the same, join us
UK political party funding

A secretive club for major Conservative donors known as the ‘Advisory Board’ has been holding regular meetings and calls with Prime Minister Boris Johnson and the chancellor Rishi Sunak.

The club, some of whose members have given at least £250,000 to the party, has been developed by Ben Elliot, Tory co-chair, as a means of connecting major Conservative backers with its top figures.

The club does not appear in party literature but Conservative officials confirmed the Advisory Board “occasionally” meets with Johnson and Sunak “for an update on the political landscape”.

One person briefed on the Advisory Board’s activities said it held monthly meetings or conference calls with either the prime minister or the chancellor. Some members have used those discussions to call for public spending cuts and lower taxes, a donor said.

Advisory Board members were among those present for an exclusive gathering on June 28 at the Kensington home of Rishi Khosla, a Tory-supporting banker. Elliot, a founder of the Quintessentially “concierge” service for the rich and the lobbying and PR company Hawthorn Advisors, hosted a drinks party at Khosla’s home at which Johnson mingled with leading donors.

Mohamed Amersi, a businessman and Tory donor, told the Financial Times the club was “like the very elite Quintessentially clients membership: one needs to cough up £250,000 per annum or be a friend of Ben”. A person with knowledge of the Advisory Board said that although giving £250,000 did not guarantee membership it was essentially “a donors group”.

Supporters of Elliot say the Conservatives have long had a “Leaders Group”, where donors who give £50,000 are offered regular meetings with ministers. The Advisory Board operates at a more rarefied level, with some members giving the party five times that amount. Well-placed Conservatives say that “not everyone” on the Advisory Board had given £250,000 but some had.

Eight Conservative party donors wrote cheques of exactly £250,000 in 2020 and three donors have given that amount so far in 2021. But none of those contacted by the FT would say whether they were members of the Advisory Board.

Others said by senior Conservatives to be members of the Advisory Board have not given that amount in the past year but have donated handsomely in the past. The party refuses to discuss the board’s membership.

Conservative officials insist the Advisory Board existed before Johnson made Elliot party co-chair in July 2019 but declined to say when it was set up. “I’ve never heard of it,” said one senior minister from David Cameron’s government.

Elliot’s supporters say the party co-chair is “modernising and professionalising” the party’s fundraising operation and that also applied to the Advisory Board, which had become more “structured”. 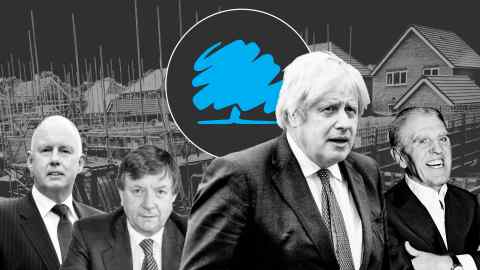 One well-placed Tory referred to a “250 club”, saying it “is like whisky: you push to see how high you can raise the price”. A Conservative spokesman said there was no body called “the 250 club”.

The Conservatives say the party’s fundraising efforts have no bearing on government policy. “Government policy is in no way influenced by the donations the party receives,” a spokesman said. “They are entirely separate.”

The spokesman added: “Donations to the Conservative party are properly and transparently declared to the Electoral Commission, published by them, and fully comply with the law. Fundraising is a legitimate part of the democratic process.”

Many Advisory Board members are said to be Thatcherites who have called on Johnson and Sunak to change their economic stance. One donor said: “T​he members are all free marketeers and are unhappy with the economic direction of the government. On the calls, they are frequently having a go at the government for raising corporation tax and telling them, ‘We need to stop all this state intervention’.”