Lead the way with 50% off
Americas

Sign up to myFT Daily Digest to be the first to know about Americas news.

Giovanna Pinto Santos, who will turn three years old in August, plays with her collection of building blocks on a tiled floor. She picks up a rectangle and shouts: “R — Red, like apples!” One year ago, Giovanna could not recognise colours, numbers or letters and was struggling to speak — significantly behind for her developmental age group.

Then, Giovanna and her mother, Regiane, 28, began receiving weekly visits from the state-run Criança Feliz, or Happy Child programme, in their home in the north-eastern Brazilian state of Sergipe. The programme aims to educate parents about the importance of early learning.

Giovanna has two older brothers and both her parents work. There was previously little play time or interaction with family members. Regiane, on the advice of Criança Feliz, started spending an hour each afternoon with her toddler, playing special games. Her daughter’s progress since then has been remarkable.

“She can count, sing along to songs and helps read stories, all the sorts of things her brothers couldn’t do at this stage [which] will undoubtedly help her when she starts school next year,” says Suzana da Silva, who supervises home visitors in Sergipe — the first municipality to pilot the programme. Ms da Silva has followed Giovanna’s progress and describes her family as, “a typical, busy working-class Brazilian household”.

“Many families from humble backgrounds in Brazil don’t understand the importance of playing and interacting with very young children,” says Ms da Silva. “And mothers often haven’t received an education of their own”.

Since Criança Feliz launched in July 2017, 253,000 underprivileged children up to the age of four are seen on a weekly or fortnightly basis. Visitors receive a monthly salary of R$2,500 (£517) and are overseen by supervisors, who provide in-depth training on playing techniques and cognitive learning practices.

Close to R$226m has been directed to the Criança Feliz scheme since its launch, says minister for social development and trained neuroscientist, Osmar Terra. The resources are pooled from the ministries of education, health and social development. The UN Children’s Fund (Unicef), helped design the finance structure alongside local authorities. Brazil is following a UN model used in 18 other countries called “Care for Child Development”, that addresses the link between child development and improved learning ability in later life.

São Paulo city councillor Janaína Lima says there is a renewed sense of planning in the state and that financing has been dedicated to children under the age of six. “We used to worry about the care provided for very young children in our city [ . . .] but there has been genuine development and focus in recent months for zero to five year olds.”

Brazil is working hard to promote early childhood development. In 2014, a landmark 10-year education plan was written into law, which, for the first time, includes the right to education for Brazilian children between up to three years old.

“Inequality in Brazil starts when children are born,” says Mr Terra. “By the time they arrive at school, children from wealthier backgrounds have a level of vocabulary that is 40 per cent higher than those from more deprived homes. We need to focus on the under-fours to tackle inequality in Brazil.”

One reason for visiting children in their homes is the low levels of nursery and pre-school attendance. According to the last national census in 2010, about 10m children under the age of five did not have access to education, of those, 80 per cent were under the age of three. In São Paulo’s leafy Pinheiros neighbourhood, a non-profit association called Alana, has worked since the early 1990s to stress the need for better standards of care in crèches, in part to encourage parents to send them there.

Raquel Franzim, an adviser at Alana, says that at birth there is little difference between wealthier and poorer babies in Brazil. “But, once born, inequality skyrockets,” she says. Studies by Alana show some education centres are so sub-standard that younger children are worse off than if they had stayed exclusively at home.

Almost half of nurseries in urban São Paulo do not have access to any outdoor space and only 31 per cent of Brazil’s nurseries have even a playground. Because light deficiency has been shown to affect a child’s cognitive potential, Alana launched a project in 2016 to bring more green spaces to schools, called Criança e Natureza, or Children and Nature. Their effort is now is being incorporated into public policy.

A second project of Alana’s, Território de Bricar, uses advertising campaigns to build awareness of the importance of learning through play. Last year, the play theory was written into Brazil’s national curriculum.

Criança Feliz diverts funds from the capital Brasília to each town for promotional purposes and Mr Terra says marketing is vital to help reach their target of 1m children enrolled in the voluntary scheme by the end of 2018.

At the Foundation Maria Cecilia Souto Vidigal, campaigns to communicate the government’s efforts are under way. “We want to make the science behind childhood development easy to understand for the everyday Brazilian,” says director Eduardo de Campos Queiroz. So far, he says, “the message is working”. 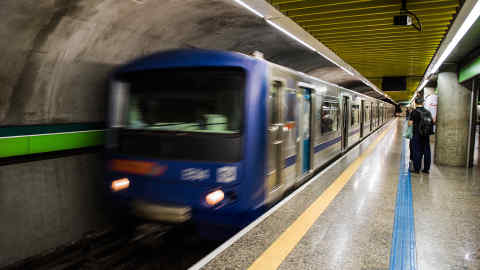 A documentary they sponsored, O Começo da Vida (The Beginning of Life), was screened in cinemas across 21 Brazilian cities in 2016 to more than 21,000 viewers. Bem Estar, a popular daytime television show, has introduced a regular five-minute slot on early-childhood education to increase parental awareness as a direct result of the foundation’s campaign.

Social participation has long been important to some cultures in a society as diverse as Brazil’s. For minority groups such as indigenous and African Brazilian cultures, engaging a child’s imagination, gestures and traditional folklore is a significant part of early interaction, says Alana’s Ms Franzim. But the importance of childhood development has, until recently, largely been forgotten at the state level.

The hope is that these changes will have time to take root. Brazil is yet to see the results of its 2014 education plan incorporating early learning initiatives. It will take time, which remains an uncertain commodity during a period of political upheaval in the country.

“We need policies that go beyond a presidential term,” says Ms Franzim. However, for its advocates, the fact that early-education is being discussed and promoted on a large scale is an important first step for the country and the future of its children.