How airlines aim to use big data to boost profits

“Good afternoon Mr Smith, and congratulations on reaching 500,000 air miles. Lunch will be served an hour after take off — we’re preparing your filet mignon just the way you like it. I’d like to apologise for the slight delay to your flight to Miami last week, and let you know we’re scheduled to arrive on time today.”

Mr Smith no longer needs to be sitting in first class, wearing a Rolex and flashing a gold Amex to qualify for this sort of treatment. Airlines are seeking to harness big data to personalise customer experiences for as many travellers as possible — and they have a lot of data.

“We need to be operating at the level of Google,” said Joe Leader, chief executive of the Airline Passenger Experience Association, in a report ahead of this year’s Aviation Festival.

“For every passenger, we know every detail that serves as a marketing treasure trove of personalisation. We have full names, address, exact birthdays, seat assignments, credit cards and everything that should make personalisation easy,” he added.

According to researchers at the Amrita School of Engineering in India, the average transatlantic flight generates about 1,000 gigabytes of data, the equivalent of about 2,000 hours of CD-quality recording.

Writing in a blog in 2015, Mark Ross-Smith, who now works at Malaysia Airlines, said an airline could record details including how many times a customer researched a flight on its website before booking, whether their cursor hovered over upgrade options and whether they booked using their usual payment method.

Airlines are hoping big data might prove one antidote to the pressures of tight profit margins and intense competition. “We really need to put our data to work,” said International Airlines Group, parent company of British Airways and Iberia, to “support our airlines’ brand, customer loyalty and profitability”.

Earlier this year American Airlines rolled out an app that allows flight attendants to offer passengers “a gesture of goodwill”, usually air miles, when there are problems such as the flight entertainment system not working, instead of saying “contact customer relations when you land”.

“Our goal is to improve the customer experience, particularly when things don’t go as planned, to make it a little bit less painful for them,” the airline said.

Flight attendants on United Airlines have handheld devices that give them access to customer details such as when they last flew with the airline, whether they have a tight connection and if they have dietary requirements. Like American, United offers customers a bag-tracking service to alert them if their luggage is lost or delayed.

Low-cost airline Ryanair has a broader vision, with aims to be the “Amazon for travel”, using customer data to cross-sell extras, such as hotel rooms, on a one-stop-shop platform.

Customers could sign up for a MyRyanair account, which saved personal preferences and allowed the company to offer targeted products and services, said Kenny Jacobs, chief marketing officer. “If a customer is travelling to Alicante with two children, we can offer them a five-seat car for hire.”

Meanwhile, Delta, a self-styled “data-driven” airline, has started asking flight attendants to interact with five passengers, who at the moment must be members of their SkyMiles loyalty programme, on every domestic US flight.

“You want to feel valued,” said Allison Ausband, senior vice-president of in-flight service. “We are getting thank-you notes from customers for acknowledging them on the aeroplane . . . Whether apologising for delays or acknowledging their [loyalty programme] status, we make them feel that they are that valued customer.”

On a flight last year, the Delta team alerted their control centre when a passenger who was flying to an interview spilled a drink on himself. The airline provided a clean shirt for the passenger at arrivals.

Delta said it did not plan to increase staffing, reasoning that automation and digital improvements had sped up the check-in process.

However, Gerrit Loots, from consultancy AlixPartners, questioned to what extent personalisation would drive customer retention. “Data exploitation is not really a competitive differentiator,” he said. “To be a top-tier airline these days, you have to have these things.”

Another key question is how far personalisation should go, and at what point data collection strays into invasion of privacy.

If Mr Smith has ordered a gin and tonic with a double twist of lime on his previous five flights, should a flight attendant offer him one on his next, before he is asked?

Delta says this predictive service is coming soon, although other airlines say they are yet to launch into the area.

According to Kevin O’Sullivan, lead engineer at research group Sita Lab, several of the world’s biggest airlines and airports are “waking up to the liability of sitting on big data”. 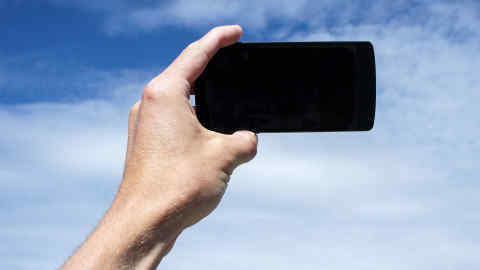 Some IT departments, he said, “want to get away” from storing more arbitrary personal data, such as drink preferences, which benefited marketing but generated risk.

However, said Mr O’Sullivan, the broader use of technology had enormous potential for the industry.

Sita recently completed a six-month trial of blockchain technology with BA and Heathrow and Miami airports, which focused on flight-status information, where there is often no single data set or “version of the truth”.

If all relevant airlines and airports worked from a single data set on the blockchain, he said, this problem would be solved.

Blockchain technology could have other uses, such as helping streamline supply chains and making them more transparent, he added. IAG said blockchain was a “key priority”, while Lufthansa has started a “blockchain for aviation” initiative.

IAG has launched a tech accelerator for start-ups working in the aviation space. One such company, Migacore, aims to use the big data gathered by airlines, combined with data from other sources including news outlets and social media, which the company stressed was public content only, to predict customer demand for specific flights on specific days.

According to Marko Javornik, of Comtrade Digital Services, airlines’ forays into tech indicated they were starting to understand that “significantly higher profits lie in monetising digital assets”, rather than simply seats on planes. “Mobile apps are just a first stage of transformation,” he said.

After a series of public relations disasters in the past year, including the death of a puppy on a flight, United Airlines has stepped up efforts to improve its service by using big data, writes Camilla Hodgson.

Flight attendants are equipped with an app filled with passenger information, including whether they have a tight connection or if their child needs their own seat.

Staff also know where passengers have been and where they are going. Since United encourages as much personalisation as possible, a passenger may be asked whether their recent trip to Hawaii was pleasant the next time they ask for water.

“Our flight attendants are able to access customer profiles and journey information at their fingertips through their handheld devices, allowing them to better engage with our customers,” the company said.

All United’s frontline employees — from flight attendants to gate agents — also have the airline’s “In the moment” app, which allows them to compensate customers for accidents such as spillages or delays.

A customer with a grievance no longer need spend hours on the phone to United HQ: if unexpected turbulence rocks the drinks trolley and launches a cup of tea into an unsuspecting lap, staff are allowed to try to address the problem straight away with complimentary food or air miles points.

According to United, data and mobile technology would “enable more caring and relevant conversations with our customers”.