We’ll send you a myFT Daily Digest email rounding up the latest University of Cambridge news every morning.

The battle for technological supremacy between China and the US risks damaging Cambridge’s growing reputation as a global centre for innovation, experts have warned, as British and other western universities come under increased scrutiny for their links with Beijing.

“The risk is that we find ourselves stuck between two world powers, trying to appease both,” said Alexi Drew, research associate at the Centre for Science and Security Studies at King’s College London.

Many British universities have attracted interest from Chinese institutions as they tap into research and development in diverse technologies, including some with military and security applications.

Cambridge, where academics and entrepreneurs have long nurtured a dynamic interchange between the corporate and academic worlds, has unique appeal, both for outsiders and for British policymakers seeking to promote national assets on the global stage.

Scientific advances made in the city have found their way into some of the world’s top selling drugs and almost every mobile phone, through the semiconductor company, Arm Holdings.

“[For the Chinese and Americans] it is an observation post. It is a really hot centre for artificial intelligence advances, life sciences and other things that have not been in the public eye yet but are in the Cambridge labs and secretive spin-offs,” said a US-China expert working for a tech start-up, who asked not to be named.

There is obvious opportunity in this interest. But there are also complications at a time of heightened superpower tension, increased focus on the Chinese state’s expansive involvement in western university research and past involvement in intellectual property theft.

The most obvious manifestation of these tensions is Britain’s contentious decision to allow the Chinese telecoms equipment company Huawei to play a part in building its future 5G networks despite pressure from Washington to shut out the company.

Down the line, Cambridge and a nexus of research and investment linking British and Chinese scientists, university colleges and companies could be caught up in similar contortions. “If it goes that way, the university could be hauled into it very quickly,” said Kerry Brown, professor of Chinese studies at the Lau China Institute.

On the surface, many Cambridge luminaries find lots to love about China’s attraction to their city.

The celebrated Chinese poet Xu Zhimo, who studied at King’s College in the 1920s, romanticised the university city — and the “gentle flow of the river Cam” — for generations in China with his poem “On Leaving Cambridge”.

A century later, Chinese tourists flock to the city to visit, among other attractions, a memorial garden dedicated to the poet. The city has proportionally the largest Chinese population, nearly 4 per cent, of any British town.

There have also been a series of high-profile acquisitions as well as the flow of Chinese money into research projects, including a new science park outside the city. Among headline research collaborations is one with Beijing’s Tsinghua University, which will bring millions of dollars of funding.

Charles Cotton, who co-authored The Cambridge Phenomenon, charting the city’s entrepreneurial success over 50 years, said: “In the past you had to go to the US to make it big. Now China is an option.” 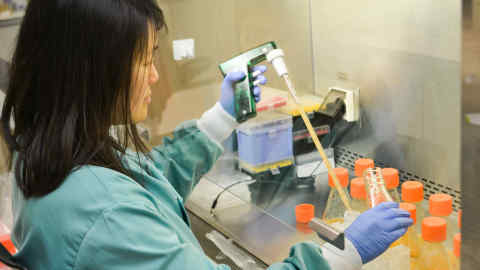 Cambridge has never been short of start-ups. What it has often lacked is the ability to scale up, said Hermann Hauser, chairman of Amadeus Capital and one of the brains behind Arm. In this sense, the Chinese, like the Americans, are perfectly positioned to help. “We need to be close to Tencent, Alibaba, Huawei in the same way we are with Microsoft, Apple and Google,” he said.

But the Americans are not the only ones who see danger in Britain’s ambitions to face both east and west. China experts in the UK are increasingly alarmed at how relationships between British university towns and China are evolving.

Charles Parton, a former British diplomat who worked for years in China and is an expert at the Royal United Services Institute, argued that there first needs to be a clear distinction between what constitutes influence and what constitutes interference. “The whole question in terms of Chinese interference, in terms of civil military dual-use technology, is absolutely vital and the UK needs to get a grip on this,” he said.

Matthew Henderson, another former UK diplomat with years of experience in Asia and the director of Asia studies at the Henry Jackson Society, goes further. He said the Chinese had been allowed to gain a massive toehold in one of Britain’s most valued national assets, with little scrutiny of their intent.

“Effectively, we have no defences around our fort. All the boundaries have been penetrated,” he said.

One Foreign Office official acknowledged how delicate it was to calibrate at a time when Washington saw competition for technological supremacy increasingly as a “zero-sum game”. “It is not straightforward for us to navigate,” he said.