Brussels braced for EU trade and tech battles with US

The next president of the European Commission has steeled Europe for battles with Donald Trump over trade and tech regulation, handing more powers to the bloc’s top antitrust enforcer and urging Brussels to be robust in dealing with global rivals including China.

Ursula von der Leyen on Tuesday promised to spearhead a “geopolitical” commission in Brussels as she promoted Margrethe Vestager, the EU’s Danish competition chief, to be a powerful executive vice-president with an expanded role in charge of regulating US tech companies.

Ireland’s Phil Hogan, one of Brussels’ most vocal opponents of Brexit and a former agriculture commissioner, has been nominated as the EU’s new trade chief — a role that will put him in charge of negotiating any EU-UK trade deal and managing strained trade relations with the White House.

Ms Vestager and Mr Hogan, who will both be serving second terms as commissioners, have been outspoken defenders of European interests against Washington’s trade protectionism and the market dominance of American digital giants.

Immediately after his nomination, Mr Hogan hit out at Mr Trump’s “reckless” trade policies and said he would try to make the US president “see the error of his ways”.

“Mr Trump certainly has indicated his clear preference for trade wars rather than trade agreements. If he keeps up this particular dynamic of protectionism, I expect that the European Union will continue to forge deals around the world,” Mr Hogan told Irish national broadcaster RTE.

The appointments came as Ms von der Leyen, the former German defence minister who EU leaders chose in July as the next commission president, unveiled her choices to staff the incoming commission — the policymaking arm of the EU.

Ms Vestager, who has been dubbed the “tax lady” by Mr Trump, has dished out record competition fines to Google and demanded the Irish government claw back taxes from Apple. In June, Mr Trump said the Dane “hates the United States perhaps more than any person I’ve ever met” after her clashes with American tech companies.

In addition to policing mergers and state-aid rules for the next five years, Ms Vestager will also lead Brussels’ digital policy as an executive vice-president in the new commission. 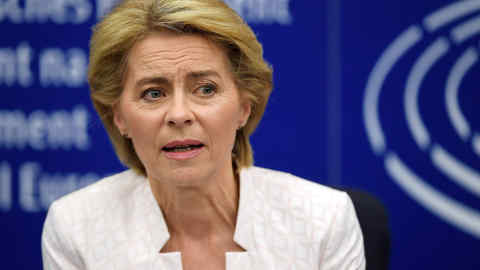 The job will involve pioneering a sweeping new “EU Digital Services Act” that will regulate how the likes of Facebook and Google’s YouTube police illegal content and combat hate speech.

Agata Gostynska-Jakubowska, of the Centre for European Reform in Brussels, said: “The role of the executive vice-president gives Vestager extra clout in tough conversations with the US and in China but also with EU’s own member states, which failed so far to speak with one voice on what Europe’s strategy should be.”

Ms Vestager’s move to combine competition and tech policy was among the biggest surprises of the team unveiled by Ms von der Leyen and has raised questions about how the Dane will juggle two of the most politically sensitive parts of the commission’s regulatory and antitrust work.

Ms von der Leyen insisted Ms Vestager’s expanded portfolio was a “perfect combination” at a time when competition policy has been moving into areas such as data privacy.

“Margrethe Vestager has done an outstanding job as a commissioner for competition. There is a huge field in front of her. The only aspect that matters on portfolios is quality and experience,” said Ms von der Leyen.

She played down any tensions with Washington, saying her commission would “build a partnership with the United States, define our relations with a more self-assertive China, and be a reliable neighbour”.

In other big moves by Ms von der Leyen, Italy’s nominee Paolo Gentiloni will become the EU’s economics chief. The choice is controversial as successive Italian governments have been at loggerheads with Brussels over its compliance with budgetary rules.

Ms von der Leyen said the role of enforcing and reforming the budget rule book would be “balanced” with the leadership of Valdis Dombrovskis, an executive vice-president in charge of financial services and the euro from Latvia.

France’s Sylvie Goulard will lead the bloc’s push to create an industrial policy, leading on defence and the single market. Belgium’s Didier Reynders and the Czech Republic’s Vera Jourova will oversee compliance with the rule of law.

Frans Timmermans, Dutch commissioner, will join Ms Vestager as an executive vice-president in charge of launching the EU’s “New Green Deal” for climate and sustainability.

The 27-strong college of commissioners faces hearings in the European Parliament at the end of the month and will come into office on November 1 pending a confirmation vote in parliament in October.

The UK, which is due to leave the bloc on October 31, did not nominate a commissioner.

“Brexit, should it happen, is not the end of something but is the beginning of our future relationship.”

Should the UK gain an extension to its Brexit process, Ms von der Leyen said the UK would have to nominate a commissioner and be assigned a job in her team.

Concept of a regulatory ‘superpower’ is flawed / From Alberto Mingardi, Turin, Italy