Nurseries and childminders in the UK are struggling to pay their staff the minimum wage, citing funding problems resulting from government policies.

Under an initiative rolled out last autumn, three and four-year-olds in England with working parents are entitled to 30 hours of fully funded childcare a week.

But a survey conducted by the National Day Nurseries Association and published on Wednesday found that since the policy was introduced, closures of nurseries and childcare providers have increased 47 per cent.

“One in five English nurseries expect to make a loss and many fear they may have to close their doors,” said Purnima Tanuku, chief executive of the NDNA. “It’s about time government woke up to the full cost of delivering their 30 hours ‘free’ childcare policy.”

According to the NDNA, the annual gap between the cost of providing childcare and what the nursery receives in funding from local authorities has grown to an average of £2,166 per child.

Nurseries said they were being forced to restrict the number of places they offered, hold back on hiring, or charge parents for extras, such as food or excursions, to make up the shortfall. 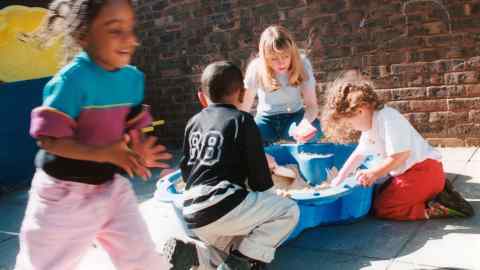 The policy has also created a huge administrative burden, with nurseries reporting losing at least one full working day each week to dealing with the new system and helping parents register.

The NDNA also reported that about a third of nurseries had experienced late payments from local authorities. The average wait time is three and a half weeks, but one-third of nurseries surveyed were paid late, after four weeks or more.

Separately, MPs on the Treasury select committee published the government’s response to its childcare inquiry on Wednesday.

The government said it remained committed to delivering “good quality childcare” and would continue to “support parents with the costs of childcare”, but did not concede that the sector was inadequately funded.

Neil Leitch, chief executive of the Pre-school Learning Alliance, said: “It beggars belief that in the face of such overwhelming evidence that the childcare sector in England is inadequately funded, the government continues to dig its heels in and insist that everything is fine.

“Recent independent research revealed that there is currently a half billion shortfall in sector funding. Clearly this is not a problem that is going to go away on its own, and the fact that the DfE is ‘continuing to monitor delivery costs’ will offer little comfort to the many childcare providers across the country who face potential closure if things don’t change.”