The FT’s wine columnist reveals her favourite clubs, cellars and bars in the capital

Cocktails, craft gin and now no-alcohol bars may be fighting for attention in London, but the UK capital is still a wine city.

It has been the focus of the world’s wine trade since long before the Bordeaux region was governed by the English crown in the Middle Ages.

Today, visitors to London can choose from hipster wine bars in the city’s trendy eastern quarter, some of the world’s most eclectic restaurant wine lists and wine stores staffed by unusually knowledgeable and enthusiastic wine geeks. And, if you can score an invite, the city now has at least three private members’ clubs devoted to wine. Here are some places to look out for:

67 Pall Mall, London’s first private members’ club for wine lovers, in the heart of St James’s, boasts a far, far wider array of fine wines — 1,000 available by the gossamer-thin Zalto glass — than any of the traditional gentlemen’s clubs in the vicinity. Women members are welcome and may store their own wines in its cellars.

This also applies to the newer Oswald’s club, a wine-soaked, more spacious sister of proprietor Robin Birley’s 5 Hertford Street, with fine wines at such low prices you could, in effect, save your membership fee with a single dinner.

Trade in Soho is more raffish, aimed at hospitality professionals who want to drink great wine after work.

Russian-owned Hedonism Wines in Mayfair, a shop that is effectively a luxurious wine cave, offers visitors a frequently changing roster of 48 wine treasures available to taste (for a fee). It has spawned a restaurant on Piccadilly, Hide, where customers can order any wine to be ferried round from Hedonism’s shelves as well as those on the restaurant’s list.

The other obvious magnet for wine browsers is Berry Bros & Rudd’s new shop, challengingly across the street from 67 Pall Mall. It’s not quite as atmospheric, nor nearly as ancient, as this family company’s original premises round the corner at 3 St James’s Street but, like Hedonism, it’s one of remarkably few places in London where you can buy all that fine wine that is traded in and around the capital by the single bottle.

Another possibility is one of the five Lea & Sandeman stores, in Chelsea, Fulham, Kensington, Barnes and Chiswick. Other small groups of wine shops include Jeroboams, Vagabond (whose stores double as wine bars) and The Sampler, both of which always have interesting wines on taste. Seek out Bottle Apostle and Theatre of Wine for a particularly idiosyncratic range.

A magnet for serious wine lovers is Noble Rot, a wine bar and restaurant in Bloomsbury and home of the ground-breaking wine magazine of the same name. Its proprietors are adding a second branch in Soho, on the site of the now-closed Gay Hussar restaurant, one of the most famous names in London’s political dining history.

Feature
Explore our city guide: London with the FT 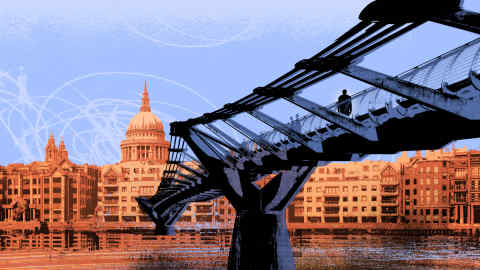 Vinoteca, a small group of bustling wine bars with wine shops attached, has locations dotted across central London. Its wine selection traditionally has been particularly strong on Italy — a much-needed specialism in Francophile London.

Quality Wines on Farringdon Road is run like a salon for food and wine lovers, with a rotating selection of wines available by the glass and a small-plates menu featuring wine bar classics and staples from neighbouring modern British restaurant Quality Chop House. Disclosure: it is co-owned by our son Will Lander, but Gus Gluck, who previously ran two Vinoteca restaurants, is given complete and particularly effective autonomy over it.

Wine importer Les Caves de Pyrene was an early advocate of natural wines. Its wine bars Terroirs and Soif, in Charing Cross and Battersea respectively, have long championed these wines made by the simplest of methods, and are not quite as prevalent on the London wine scene as in, say, north-east Paris.

London even has its own wineries now — places where wine enthusiasts can experience how wine is made, using not just English grapes but those from mainland Europe too. London Cru, based in a Victorian warehouse and former gin distillery in west London, offers wine tastings to the public as well as “winemaker for a day” events, guiding participants through tasting and blending wine. Blackbook, located in a railway arch in Battersea, also offers tours of the winery and tastings of its range of pinot noir and chardonnay.

Where are your favourite places to buy and drink wine in London? We’d love to hear in the comments below

Follow @FTGlobetrotter on Instagram for insider tips from our global network of correspondents to help you make the most of your work travel. Let us be your locals